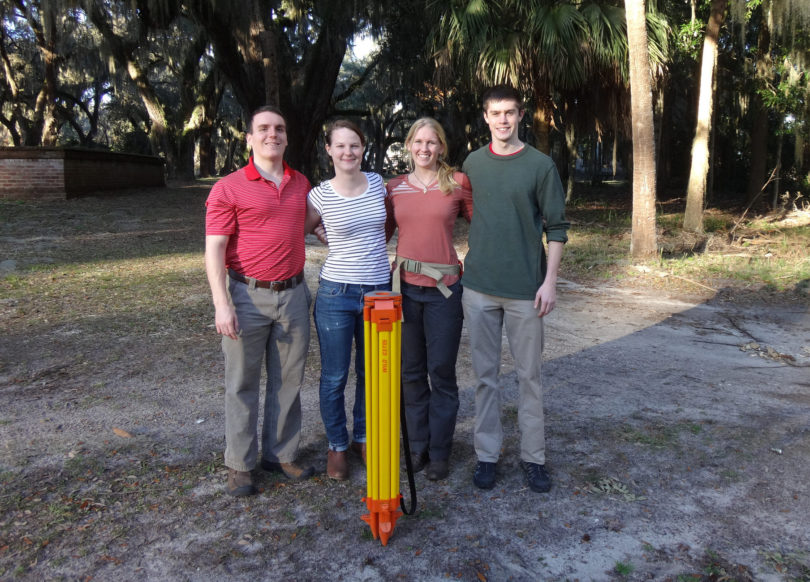 A team of students from the University of Georgia College of Engineering is working to help the UGA Center for Research and Education at Wormsloe meet a portion of its energy needs through solar energy. The students involved in the senior capstone design project are

Savannah, Ga. – A historic estate along the Georgia coast that traces its roots back more than three centuries may soon provide a look at solar energy’s potential to meet the world’s growing demand for power.

A team of students from the University of Georgia College of Engineering is working to help the UGA Center for Research and Education at Wormsloe meet a portion of its energy needs through solar energy. In addition, the team’s work will serve as the foundation for a long-term solar research, education and outreach program on the island near Savannah.

The work is a senior capstone design project for students John DeRosa, Samantha Trulove, Brooke Spreen and Garrett Steck and is funded by a grant the Wormsloe Foundation awarded to UGA engineering professor David Gattie.

“Working at a historic site adds a different kind of element to the project,” said DeRosa, an environmental engineering major from Lilburn. “It forces us to be mindful of permitting issues that would not exist in other places. Additionally, the site forces us to be especially considerate of the cultural and ecological impacts our design will have.”

Located on the Isle of Hope, Wormsloe Plantation dates back to the 1730s, and the property has served as a military stronghold, plantation, country residence, state park and tourist attraction. In 2013, the Wormsloe Foundation donated 15.45 acres of the land to UGA. The university operates the property as a historical and ecological preserve. Wormsloe also serves as a site for interdisciplinary research by faculty and graduate students in archaeology, ecology, environmental planning and design, historic preservation, landscape architecture, geography, history and engineering.

With plans to construct additional facilities to support research, education and tourism, Wormsloe must account for an increase in power demand. The facility wants to meet some of this increase through renewable energy, specifically solar, and incorporate the alternative energy system as a research and education feature for the site.

The UGA engineering students are working with Wormsloe to design a demonstration solar power installation that will allow visitors to see a working renewable energy system. In addition, the team’s design will connect to Wormsloe’s existing infrastructure, allowing for future expansion of the technology while satisfying a portion of Wormsloe’s energy demand through solar energy.

“One of the great things about our senior capstone design course is the students must interact with their client,” said Jason Christian, an assistant professor in the College of Engineering and one of the team’s faculty mentors. “The students experience the give-and-take that occurs on projects from start to finish.”

Stephan Durham, an associate professor and coordinator of UGA’s civil engineering program, also serves as a faculty mentor on the project.

According to Christian, the work will help the team consider the big picture as well as the actual “nuts and bolts” of the project.

Spreen, a senior environmental engineering major from Johns Creek, said she and the other students are focusing on two locations for the solar demonstration project: a family library on the privately held portion of Wormsloe and the new living quarters on the UGA property.

“So far, we’ve identified where we would like to install the panels for each location and begun to determine how large of a system will be needed,” Spreen said. “The dorms, for example, require more electricity than the library—because of things like kitchen appliances and a larger HVAC system—so they will need more panels and possibly more robust system components.”

Spreen said one of the greatest values of working on a real world project such as the solar power system at Wormsloe is the opportunity to work through unforeseen challenges.

“We have run into some concerns regarding the stability of the library roof, where we hope to install the panels,” she said. “Because it was built in the early 20th century, original construction documents are no longer available. We’re currently exploring the option of adding a strut system that would span the roof and distribute the weight of the panels to the walls, which are more structurally sound than the roof itself.

“We have to learn how to be adaptable and how to keep moving forward in the face of uncertainties and complications. The stability of the roof is one example. Trying to estimate the power load of the new dorms, for which there is no existing electricity consumption data, is another.”

DeRosa, a senior environmental engineering major from Lilburn, said the project has given him more confidence in the skills and knowledge he’s acquired through his studies in the College of Engineering while allowing him and the other students to make a lasting contribution to one of Georgia’s most unique places.

“We realize the importance of keeping our design in line with the mission of Wormsloe by acknowledging that our system should have an educational component,” he said. “A site like Wormsloe is interesting because it is so permanent yet so delicate at the same time.”