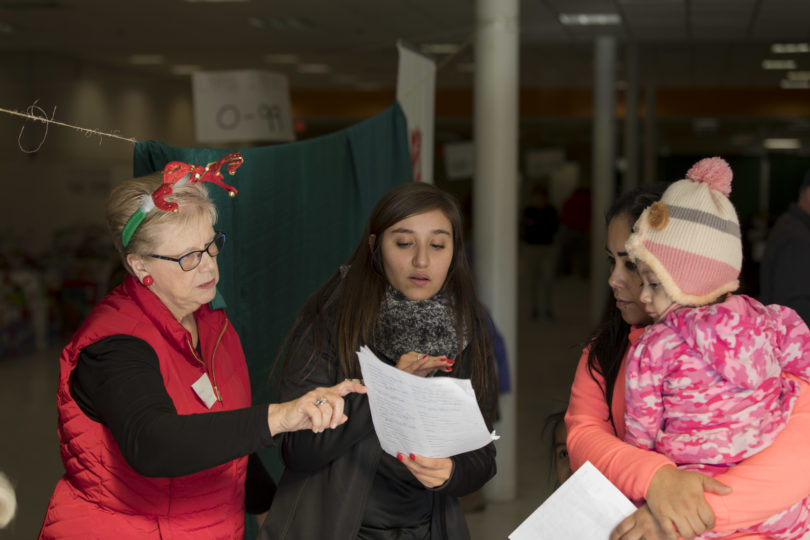 Jane Harvey, president of Athens Area Salvation Army Women’s Auxiliary, gets help with translations from undergraduate student and Goizueta Ambassador Ivette Barrera as they work with a recipient of toys.

Like many of his peers, Luis Mata looks forward to the holiday season. But unlike many of his classmates, he stuck around Athens for an extra week or so after finals to be part of the Salvation Army Angel Tree program.

It was Mata’s third year serving as a translator for the program, which distributes gifts and food to local families in need of assistance. He checked people in, made sure they received the gifts they wanted for their children and helped them out to their cars with bags of clothing, gifts, food and maybe even a bicycle.

On average, the Angel Tree program assists about 600 families per year. Of those, about 70 percent are Hispanic, some of whom don’t speak English.

Mata, a fourth-year student quadruple majoring in finance, international business, management and information systems, and entertainment and media studies, is a UGA Goizueta Ambassador, a program that recruits bilingual students to help build connections with the local Hispanic community. One of its biggest projects is Gear Up for College, an Office of Admissions program that brings Latino eighth-graders to campus to learn about the university experience. It was during a similar program, Padres y Hijos, that Mata was first introduced to all UGA has to offer, and to Rosa Arroyo Driggers, associate director of admissions for access and inclusion.

Driggers co-founded the Goizueta Ambassador program in 2012, and it remains the favorite part of her job.

“If somebody were to ask me what my point of pride is during the eight years I’ve worked here, what my favorite experience is, it would be creating and working with this group of students for the past six years,” Driggers said.

And the Salvation Army Angel Tree is a large part of that experience.

“I think the people appreciate having somebody here that they can quickly talk to while they’re waiting in line to get their gifts,” said Salvation Army Captain Mechelle Henry. “Someone will say the gift they’re picking up was supposed to be for a girl, not a boy, or something like that, and it’s wonderful to have a group here that can quickly answer those questions.”

The first year the Goizueta Ambassadors helped with distribution was eye-opening.

“For the first three hours we were there, none of us spoke English at all,” Driggers said. The event made such an impression on the students that several who graduated after that first year in 2016 came back to help the next year.

“I think that a lot of students see their family members in the eyes of the people at the Salvation Army,” Driggers said. “You’re a natural interpreter the moment you’re born. There’s something that the students have learned from that experience that makes them so passionate about helping the Hispanic population here in Athens.”

Psychology major and first-generation college student Ivette Barrera joined the Goizueta Ambassador program because she understands the struggle that occurs when two people are trying to communicate but can’t.

“It seems like something small, but you can tell that you’ve made their day by being there and speaking the same language,” she said.

This year’s event was held Dec. 18 and served 579 families, including more than 1,400 children. As for next year, there’s a good chance that Barrera and Mata, along with fellow Goizueta Ambassadors, will be among those helping distribute gifts.