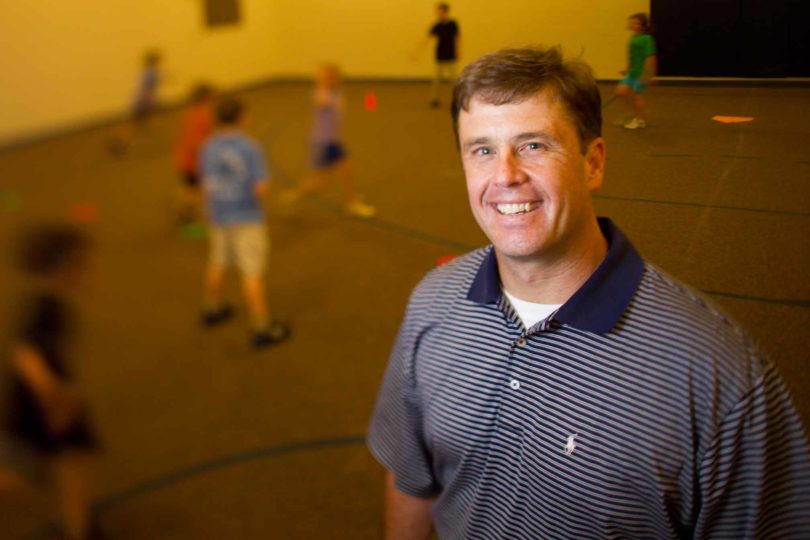 Bryan McCullick is a kinesiology professor with the Unversity of Georgia College of Education.

Athens, Ga. – Children need quality physical education to combat obesity and lead healthy lives. Georgia elementary schools make the grade when it comes to providing that education, but middle and high schools in the state don’t even come close, according to a University of Georgia study.

The results of his research were published in the June issue of the Journal of Teaching in Physical Education.

“Findings indicated that statutes were written in a manner that did not explicitly mandate school-based physical education but rather recommended or suggested it,” said McCullick, who teaches in the UGA College of Education.

Public health reforms targeted at school-based physical education are seen as a major part of the answer to the childhood obesity epidemic. This is defined by the one out of every three children who are overweight or obese, according to the Centers for Disease Control and Prevention. Doctors, scientists, health associations and government agencies argue that a key to combating obesity is to increase the amount of quality physical education instruction given in schools.

“This lack of a judicial safety net strengthens the need for clear legislative guidance if the statutes are to be interpreted in a way that will consistently adhere to the guidelines,” McCullick and his colleagues wrote in the report.

Despite their possible positive effects, programs are being reduced or eliminated in many schools, McCullick said. A lack of mandates, or statues written too broadly to enforce with fidelity, lessen the likelihood that schools will adhere to the guidelines.

In the typical American high school system, a “course” is taken at least 50 minutes every weekday, which makes a typical high school school-based physical education class time 250 minutes per week. If a state required four credits of SBPE, this meant that it exceeded the guideline of 225 minutes of instructional time per week. However, no states met those criteria.

“Given the absence of a national school-based physical education law, it is imperative to investigate whether states have directives ensuring it and that those directives mandate the appropriate amount of instructional time,” McCullick said.

New Jersey, for example, required 3.75 credits of physical education for graduation, approximately 187.5 minutes per week. Of all states, New Jersey has the strongest requirement, but it was still 37.5 minutes below the guideline.

At the elementary level, Iowa’s statute mandated that physical education be taught but did not specify how often and included the wording “…pupils in kindergarten through grade five shall engage in physical activity for a minimum of 30 minutes each school day.”

McCullick argues that since physical activity can take many forms and does not require a specialist, Iowa school officials would adhere to the statute if they allowed students to have 30 minutes of recess each day.

“Recess does not guarantee 30 minutes of moderate to vigorous physical activity,” he said. “Unfortunately, many legislators and school officials think the opposite.”

“The first step to ensuring children have a healthy level of school-based physical education is to ensure that states have mandates regarding quality physical education with clear requirements,” McCullick said. “Then, we need to implement a surveillance system to ensure schools adhere to the mandate. Until those are in place we can’t fairly determine the benefits of school-based PE.”

The study was co-authored by Thomas Baker, assistant professor of kinesiology, Phillip Tomporowski, kinesiology professor, and Tiffany Isaac a third-year UGA doctoral student in the department of kinesiology.