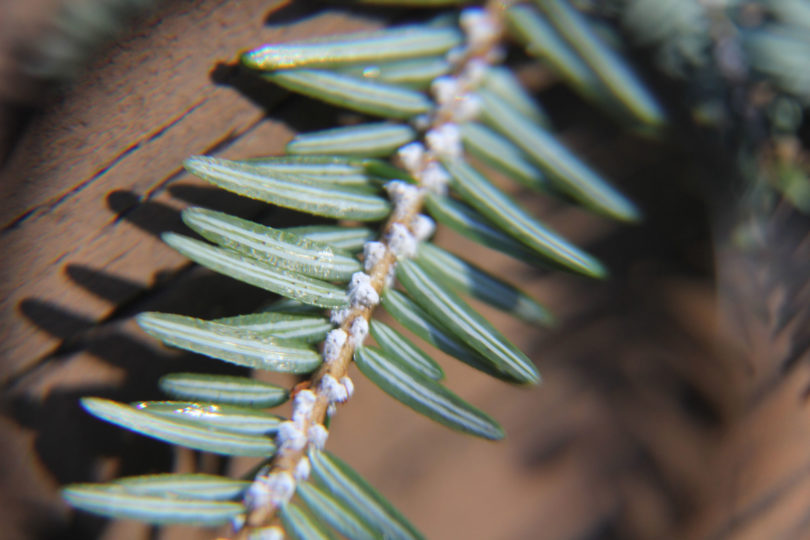 Athens, Ga. – Thousands of broken trees line the banks of the Chattooga River. The dead gray stabs were once evergreen monsters offering shade to trout and picturesque views to visitors. These Eastern hemlocks are dying rapidly, and University of Georgia researchers are working to save them.

One tiny insect, the hemlock woolly adelgid, is to blame. The Asian insect first appeared in the eastern U.S. in Richmond, Va., in the 1950s. In 2003, it crossed the river from South Carolina and started feeding on Georgia trees.

The tiny pests suck up cells from the tree’s needles, which prevent them from transferring water and conducting photosynthesis. The first obvious sign of an infestation is thinning foliage. Needles fall off, and the crown starts thinning. From a distance, trees look gray.

Researchers working to find ways to combat the adelgid have focused on releasing ladybird beetles, which eat adelgids. A new UGA study brings some of the logistical issues to light and offers hope for more successful control in the future. The results were published in the December issue of the Journal of Economic Entomology.

“Because the trees being attacked live mostly in remote forests where insecticide application is impractical, predators may be the best hope for tree survival,” said Shimat Joseph, former UGA doctoral student who authored the journal article.

Previous studies have shown widely released predator beetles, Laricobius nigrinus and Sasajiscymnus tsugae, have been successful in controlling hemlock wooly adelgid populations, but they have not survived well through multiple seasons.

“Adelgid populations are not concentrated where we are releasing the predators,” Joseph said. “Previous studies assumed populations are evenly distributed, but we are seeing that is not the case.”

According to the study, adelgid populations tend to be more abundant in the upper crown, especially early in the infestation. This study suggests predator releases should focus in this area where higher densities are more likely. Up to this point, releases have been made in the lower third of the tree crown.

“Chemical control can slow the spread of adelgids, but beetles provide some hope that we will be able to manage the adelgids and bring them into balance. We may never be able to eliminate them,” said Kris Braman, an entomologist with the UGA College of Agricultural and Environmental Sciences and co-author of the paper.

The three-year study looked at the population rates of adelgids in hemlocks located in the Chattahoochee National Forest. The 60 north Georgia trees selected for the study were 25 to 70 years old.

Predator beetles are reared on infested hemlock branches in labs. When released, the branches, saturated with about 100 beetles, are tied to living trees where populations have been identified. Strategic placement of the predators is important for successful control of the adelgid-and for the bottom line.

“Because the beetles are so expensive to grow, every single little beetle is like releasing diamonds over the canopy,” Braman said.

A cocktail of fertilizer and insecticide was applied to the trees included in the study to develop an application ratio that would maintain tree health while keeping enough adelgids alive to serve as sustainable food for the beetles but not enough to kill the tree.

“Part of the problem with maintaining predator beetles has to do with the declining tree health,” said study co-author Jim Hanula, an entomologist with the U.S. Forest Service and adjunct faculty in the UGA department of entomology. “As tree health declines, adelgids produce fewer eggs and, in turn, less food for the predators.”

Georgia trees decline faster than those found in northern states due to a lack of winter weather, which kills back adelgid populations in the North.