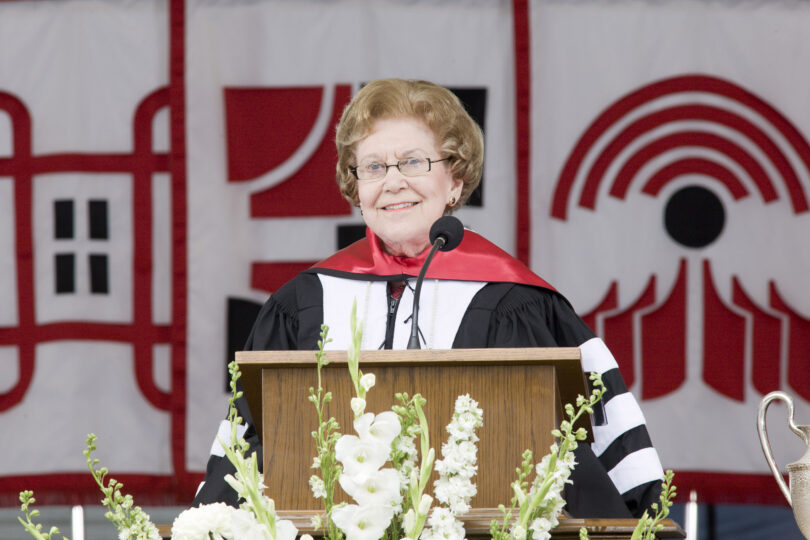 Mary Virginia Terry speaking at the podium after receiving an honorary degree during the 2009 Spring Undergraduate Commencement ceremony.

“Mary Virginia Terry made a transformational and lasting impact on the University of Georgia and the Terry College of Business,” said UGA President Jere W. Morehead. “She and her late husband, Herman, will be remembered for their inspiring generosity and loyalty.  However, I will remember her as a dear friend who sat with me every year at the Georgia-Florida game, cheering on the Bulldogs to victory. She will be deeply missed.”

A major supporter of education, children’s charities and the arts, Mrs. Terry was awarded an honorary Doctor of Humane Letters degree by UGA in 2009, the highest recognition the university can bestow. 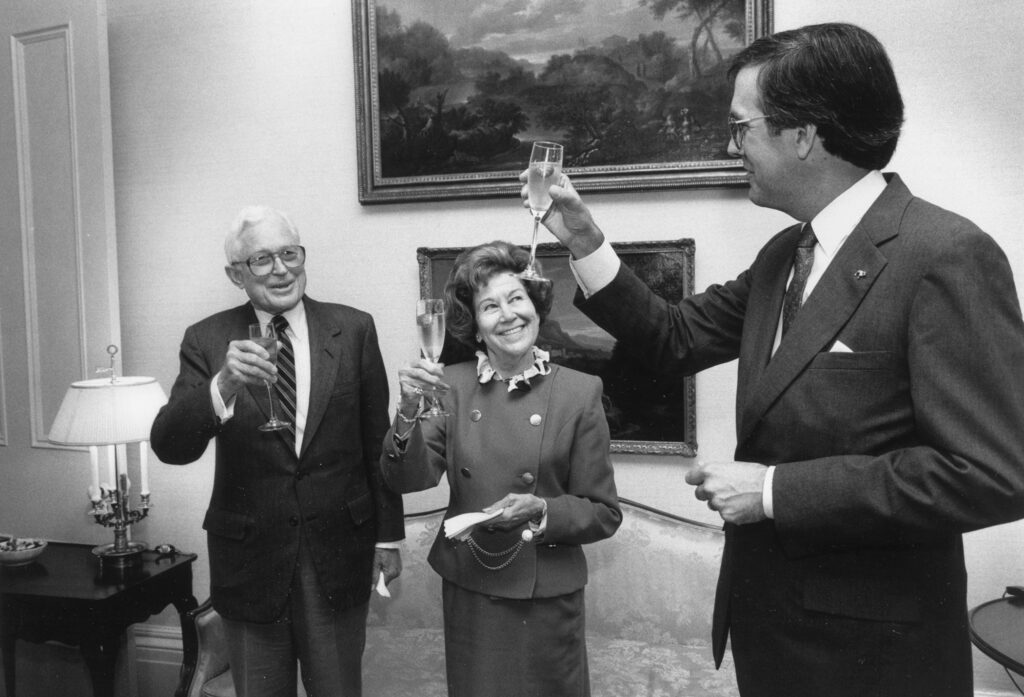 (L-R) C. Herman Terry, Mary Virginia Terry and then-UGA President Charles Knapp raise glasses in a toast after the signing ceremony for the Terry’s $5 million gift for the naming of the Terry College of Business.

UGA’s business school was officially named the C. Herman and Mary Virginia Terry College of Business in 1991, in recognition of their generous support of faculty and academic programs that facilitated the college’s mission of educational excellence.

“Herman and Mary Virginia’s landmark gift to the business school in 1990 was the catalyst for us to become the nationally ranked college of business we are today,” said Dean Benjamin C. Ayers. “Her longstanding support has enabled us to make tremendous strides educating students and forging a better future for the college and university and the generations of students she benefited. We will miss her dearly and remember her always.” 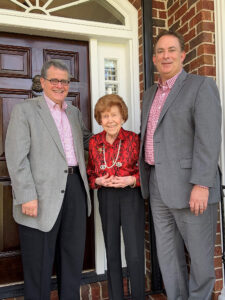 Mrs. Terry would make other major gifts to support faculty endowments, medical research and scholarship funds. She established a faculty chair in UGA’s College of Pharmacy in honor of her husband’s father.

“It’s just a matter of need,” Mrs. Terry said in 2001. “Where Herman and I saw a great need, we tried to do what we could to make things better. That’s the motivation.”

Her dedication to UGA and Terry College remained strong following her husband’s death. In 2002, she received the Blue Key Service Award from the UGA chapter of Blue Key National Honor Society. A charter inductee of the Terry College’s Pinnacle Society, Mrs. Terry received the Dean’s Distinguished Service Award in 2008 and was the honorary chair of the successful Building Terry campaign that culminated in 2017, having raised $121 million.

The Mary Virginia Terry Student Support Fund was established in 2013 to provide financial awards for domestic or international study travel, books, conference fees, tuition, professional development and career advancement for Terry College students. In 2021, she made a major donation to the university’s Georgia Commitment Scholarship Program to endow 24 need-based scholarships and support experiential learning. In recognition of Terry’s generosity, the University System of Georgia Foundation awarded her the Regents’ Hall of Fame Alumni and Distinguished Friends Award on Sept. 9.

Mrs. Terry was born in the south Georgia town of Quitman, where she grew up wanting to become a teacher. She studied social sciences at Valdosta State and earned her degree in 1940, going on to become a history and economics teacher in Miller County. During that time, she met Herman Terry, a native of Ray City and reared in Quitman, who graduated from UGA’s School of Commerce in 1939. He was working for the Commercial Investment Trust Corp. in Thomasville when he married Mary Virginia on Oct. 2, 1941, in Brooks County. Mr. Terry was transferred soon after to the Commercial Investment Trust office in Jacksonville, where the Terrys would make their home permanently. Even as Mr. Terry held executive positions with insurance firms in Jacksonville, including serving as president of Dependable Insurance Co., he and his wife extended their philanthropic and civic commitments, both at UGA and in Jacksonville. 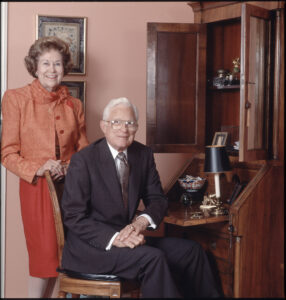 Mrs. Terry was a leading figure in the arts, education and health care in the Jacksonville community. She was on the women’s board of directors of the Wolfson Children’s Hospital, and the boards of the Ronald McDonald House, the Salvation Army, the Sulzbacher Center for the Homeless, the Women’s Guild of the Jacksonville Symphony, St. Vincent’s Healthcare Foundation and the Mayo Clinic Florida Leadership Council.

UGA remained a constant in Mrs. Terry’s life. In 2012, she served as keynote speaker for the Terry College’s graduation convocation while the college celebrated the centennial of its founding date.

“I have been very fortunate and happy to have continued my connection with the university, particularly this part of the university,” she said. “It is rewarding to all of us to know that there are young women and men like you entering the world each year who can call themselves graduates of the Terry College of Business.”