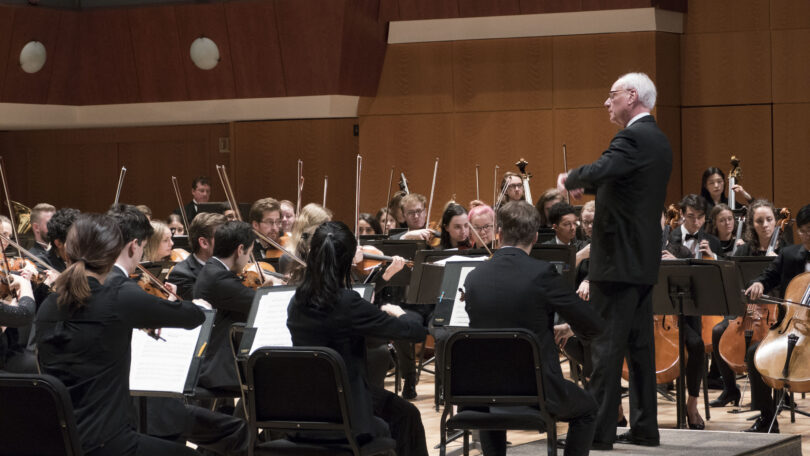 The concert, featuring the University of Georgia Symphony Orchestra, will take place on April 28 at 7:30 p.m. in Hodgson Hall. (Photo by Camille Hayes)

The Hugh Hodgson School of Music closes out its 2022 Thursday Scholarship Series season with a concert featuring the University of Georgia Symphony Orchestra on April 28 at 7:30 p.m. in Hodgson Hall. The concert is part of the Performing Arts Center 25th anniversary celebration.

Under the baton of Mark Cedel, the UGASO will begin the program with a new piece titled “Fizzle, Sweep, Crash” by DMA composition student Daniel Karcher, the winner of the Large Ensemble Student Composer-in-Residence Competition. The various sections are organized into an “arc form,” in that every part is heard once before being repeated in reverse.

The UGASO musicians were excited to perform the new piece and gave Karcher helpful support throughout his residency. Being able to work closely with musicians on specific aspects of their parts provided him with valuable feedback.

“Writing and performing an orchestra piece is always a huge investment of work and effort for everyone involved, and I cannot be more grateful for the time and dedication the musicians are giving to my piece,” said Karcher. “The residency has been an exceptionally rewarding experience for me, and I’m very excited for the premiere.”

Gustav Mahler’s famous “Symphony no. 5” concludes the second half of the program. He wrote the symphony in 1901-02. At this time, Verdi died in Milan, Picasso’s first exhibition opened in Paris, and Marconi sent the first trans-Atlantic radio signal. To Mahler, however, a symphony truly was a fantastic and variable universe of changing moods, colors and emotions.

“I have the incredible opportunity to play the principal and obbligato horn part for Mahler’s Fifth. I’ve listened to a recording of Chicago Symphony playing this piece under Solti too many times to count, and it’s been a dream of mine to play this piece and part. The orchestra sounds great, and it’s been a pleasure getting to work with Mr. Cedel and the musicians of the orchestra to put together such an incredible piece of music. Performing this piece in Hodgson Hall will be one of the best moments of my musical career so far,” said Anthony Parrish, principal horn and soloist.

The origins of the University of Georgia Symphony Orchestra can be traced back to 1941 when Hugh Hodgson conducted the University Little Symphony Orchestra. Hodgson led this ensemble until 1950. Mark Cedel brings a wealth of professional experience to his position as director of orchestral activities. This year marks his 28th year at UGA. UGASO has performed more than 200 concerts in Hodgson Hall.

Tickets are $20 for non-students and $3 for students. They can be purchased through the Performing Arts Center online or by calling 706-542-4400. Proceeds from ticket sales directly support student scholarships.