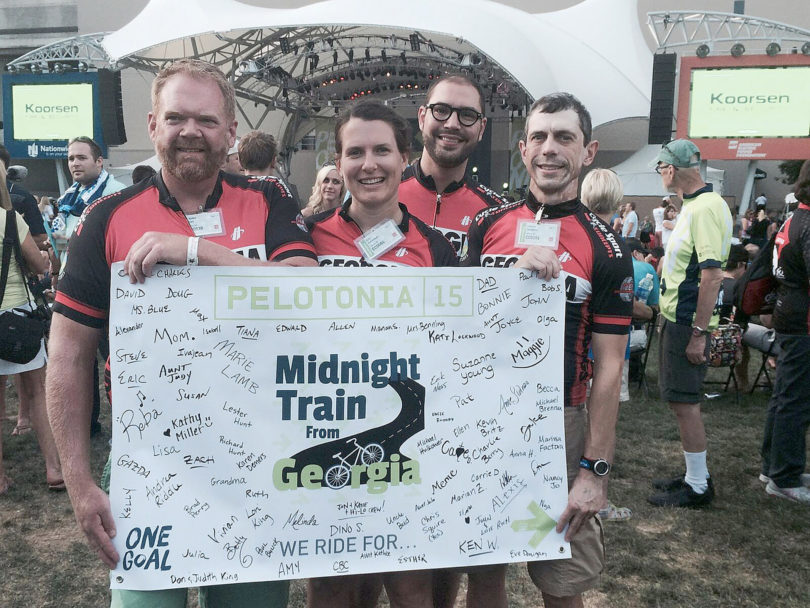 Each August, thousands of people travel to Ohio to participate in the Pelotonia bike ride, a national event that raises money for cancer research. This year, four of the participants, who together raised $11,000 for research, were from the UGA community.

The team, called “The Midnight Train From Georgia,” included Charles Carabello and Henry Oddi of the Office of Undergraduate Admissions as well as Noble Jones and Erin Ciarimboli, both doctoral candidates in the Institute of Higher Education.

Led by Jones, the team began planning for Pelotonia nearly a year in advance.

“Before coming to UGA, Noble and I both went to Kenyon College, which is part of the route the bike ride takes,” Ciarimboli said. “At the time, neither of us were cyclists, but we always had it in the back of our minds.”

After moving to Athens, Jones began cycling recreationally with Oddi. When Jones brought up the idea of Pelotonia, both Oddi and Carabello were eager to get involved.

“All of our lives have been touched by cancer,” said Carabello, a survivor of stage 3 melanoma. “This was a great thing to get behind, especially since 100 percent of the proceeds go to cancer research.”

To prepare for the race, all four members began fundraising months in advance. Their efforts included percentage nights at HiLo Lounge in Normaltown, family barbecues and office bake sales.

“We did things like sell vegetables from our garden,” Jones said. “My brother and sister-in-law also had a fundraiser for us in Ohio. Because of that event, we were able to donate $900.”

“We got grassroots support and were able to reach our team’s fundraising goal,” Oddi said. “We were flattered by the response and support from folks. I would say that that’s Athens for you.”

While raising money, the team also began training for the race in early summer.

“We started in earnest in May, bicycling regularly as a team,” Oddi said. “We would bicycle longer distances on Saturdays and Sundays. The hardest part was getting out of bed to bicycle that second day.”

After preparing all summer, the hard work paid off when the team traveled to Columbus, Ohio, on Aug. 7 for the ride. For the next few days, the team traveled 180 miles across Ohio. Along the way, thousands of people at different checkpoints cheered on the riders.

“While riding, we knew we weren’t alone,” Jones said. “You’d be hard pressed to go more than half a mile and not see someone waving or holding a sign of support.”

“At times, we were fighting exhaustion, but as a team, we never questioned if we would finish the race,” Oddi said. “We encouraged each other to finish what we started.”

Carabello said he got choked up at the end of the race.

“On the second day, we rode past yard signs that were in memory of cancer victims,” he said. “It made me think, ‘Why am I so lucky to be here?’ My family enters in my brain. And then I think, ‘I’m here to help other people get better.’ ”

“It’s the largest event of its kind in the country,” Ciarimboli said. “Every dollar goes to cancer research. That’s over $80 million donated in the time since Pelotonia began.”

After finishing the race, Oddi said he wanted to stay involved with Pelotonia.

“I feel like we finished the race, but we’re just getting started,” he said.

Though the race ended in August, fundraising for the team continues through October.

“We are still gathering funds through October on our Pelotonia page,” Jones said. “Next year, I want other people to take part in this amazing experience. I’ll do it every year as long as I’m able.”

To learn more about the race or to donate to the team, visit www.pelotonia.org/georgia.