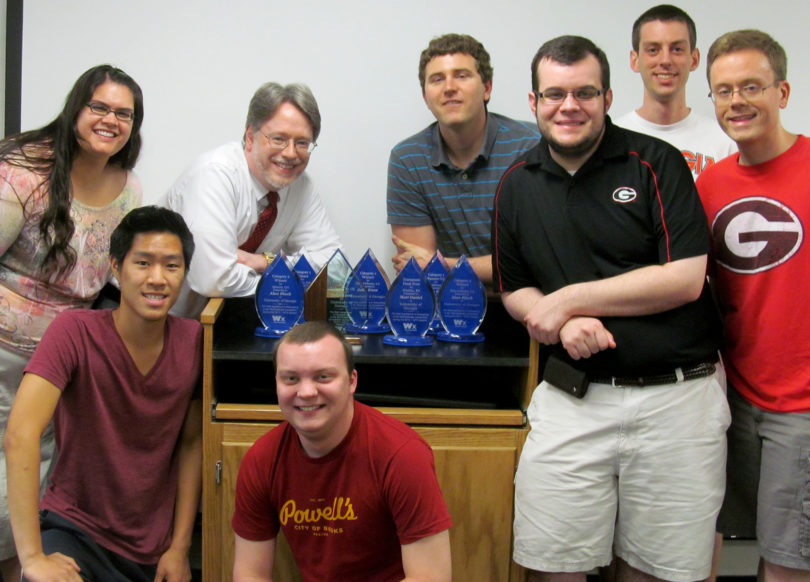 “Our WxChallenge team has placed in the top five in the nation in four out of the past six years,” said associate professor John Knox, who serves as the team manager. “I think this level of performance reflects the high quality of our students and our atmospheric sciences curriculum at UGA—and our students’ dedication to improving their ability to forecast the weather.”

The competition’s nearly 2,000 participants represented more than 50 institutions in the U.S. and Canada. From UGA, six undergraduate and six graduate students in the Franklin College of Arts and Sciences competed as well as Knox and UGA alumnus Chris Davis, who graduated in 2013.

“It’s a fun way to learn,” Knox said. “The team competition and individual tournament aspects help focus students on the finer points of weather forecasting. Each semester we hold a four-day-a-week forecasting seminar in conjunction with the competition in which we debate ‘will the low be 43 or 47 in Springfield, Missouri, tonight? And why? Will it rain or not? What factors could lead to a radically different outcome than even the National Weather Service expects?’ The value of these discussions is in developing both experience and true expertise in forecasting.”

Participants submitted forecasts by 7 p.m. each day for weather occurring in the city for 6-30 hours from the submission time.

Eight UGA team members qualified for the post-season tournament, along with 184 other competitors. Participants listed below were ranked by yearlong performance and competed in a tournament structure much like the NCAA basketball tournament, with lower numbers indicating a better seed.

In tournament competition, Rackley reached the Elite Eight and Phan made it to the Sweet Sixteen.

Additionally, Nicole Campbell of Alpharetta, who was not on the yearlong team, placed second in the freshman/sophomore category for Norman, Oklahoma.

Students gain valuable experience in this kind of competition, said Daniel, who has reached the WxChallenge individual tournament three times, including the Final Four in 2013.

“WxChallenge is a great tool to better understand the weather at various locations throughout the United States,” he said. “It allows you to open up your mind and understand how location and topography can affect the weather. It is very valuable for the students because it can better our forecasting skills and help build a resume over time.”

The competition and the team’s placement speak volumes for UGA’s atmospheric sciences program, a new program in comparison to some of the top scoring teams from other longstanding programs, Knox said.

“UGA’s atmospheric sciences program began in 2000, whereas most of the programs we compete against have a much longer history,” Knox said. “Around the country, students, faculty and employers have noticed UGA’s presence among the ‘big dogs’ in weather forecasting.”