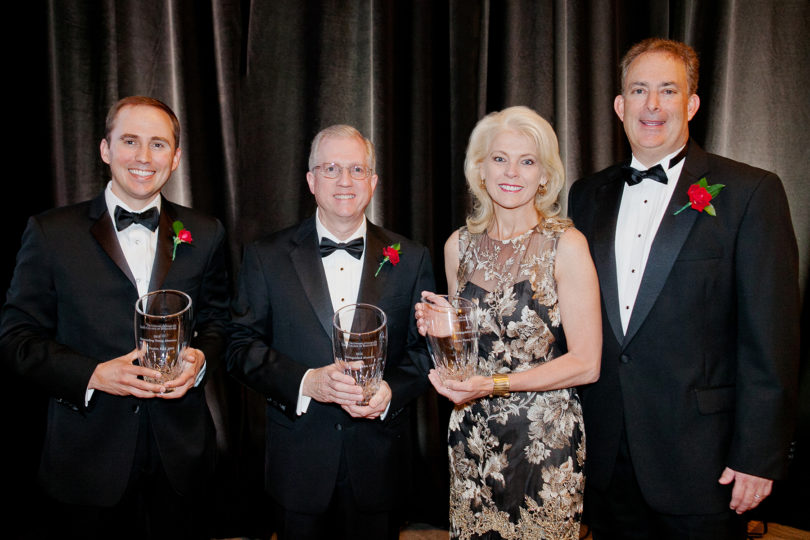 Athens, Ga. – Three prominent business executives were honored by the University of Georgia Terry College of Business at its 2015 Alumni Awards and Gala on April 25 in Atlanta.

Two of the Terry College graduates-Kevin Marsh, chairman and chief executive officer of the Cayce, South Carolina-based SCANA Corporation, and Elisha Finney, vice president/finance and chief financial officer of Varian Medical Systems in Palo Alto, California-received Terry’s Distinguished Alumni Award. David Fischer, director of the Atlanta-based AloStar Bank of Commerce, received the college’s Outstanding Young Alumni Award. All three were honored for their career achievements and for their service to the Terry College and their communities.

Distinguished Alumni Award
Kevin Marsh, who earned a Bachelor of Business Administration degree in accounting from the Terry College of Business in 1977, is chairman and chief executive officer of the SCANA Corporation, an energy provider in the Southeast. He is leading his company and his state into an energy renaissance that will see two new nuclear power plants come online in 2019 and 2020.

In addition to Marsh’s duties as SCANA’s CFO, from October 2001 to March 2003 he served as president and chief operating officer of PSNC Energy, the company’s natural gas distribution company headquartered in Gastonia, North Carolina. He became president of SCE&G in 2006 and president and COO of SCANA Corporation in January 2011. He assumed responsibilities as chairman and CEO in December 2011. Prior to his career at SCANA, Marsh spent seven years at Deloitte & Touche Certified Public Accountants in Columbia, South Carolina.

Marsh’s community outreach includes service on the boards of the Epworth Children’s Home and Citizens for Sound Conservation, and he is a past board member of the Palmetto Place Children’s Emergency Shelter, Junior Achievement of South Carolina, and Sharing God’s Love emergency support organization. He and his wife Sue have two grown daughters and two grandchildren.

Founded in 1948 as one of the first high-tech companies in Silicon Valley, former parent company Varian Associates was a pioneer in electron and X-ray technologies, including external beam radiation therapy machines for the treatment of cancer.

In 1999, Varian Associates was divided into three publicly traded companies, and Finney was named chief financial officer of the new Varian Medical Systems. In its first year, the company earned revenues of $590.4 million. Today, with revenues in excess of $3 billion, Varian has become the world leader in integrated radiation therapy systems, as well as an independent supplier of components for X-ray imaging. Prior to joining Varian, where she has also served as assistant treasurer and treasurer, Finney held risk manager positions at Beatrice Foods and the Fox Group.

Finney was named Alumni of the Year in 2005 by Terry’s risk management and insurance department, and she currently serves as a member of the Terry Dean’s Advisory Council and as a co-chair of the Building Terry campaign for Northern California.

She and her husband Bob, a Terry College alumnus who is retired from Agilent Technologies, have two children-Evan, a varsity soccer player at Penn State, and his younger brother Clint, who is graduating from high school this year.

Outstanding Young Alumni Award
David Fischer earned a Bachelor of Business Administration degree in real estate from the Terry College in 2005, and he joined AloStar Bank of Commerce shortly after its founding in 2011.
Initially, he served as an underwriter and subsequently moved from assistant vice president, to vice president, and recently to director.

“David has become the face of AloStar in the Southeast,” says AloStar CEO and fellow Terry College graduate Andy McGhee, who was familiar with Fischer’s leadership qualities from his service as chairman of Terry’s Young Alumni Board and as president of his Leonard Leadership Scholars class when Fischer was a student at Terry. As a senior, Fischer was named student representative to the UGA Athletic Association Board.

Prior to joining AloStar, Fischer worked for Bank of America in various capacities over a seven-year period. He began his career at Bank of America as an intern for the National Homebuilder Executive. He went through the company’s management training program, after which he was placed in the Atlanta Commercial Real Estate office. He worked in various roles as an analyst, underwriter and client manager from 2005-08. From 2008-11, he worked in the Special Asset Group at Bank of America, managing a portfolio of distressed investments throughout the Southeast.

Fischer has served on the boards of Camp Twin Lakes and The Nature Conservancy. He and his wife, Carrie, have two young children, Adair and Flynn.

The Terry College has been presenting its annual alumni awards since 1964. The Terry Alumni Board hosts the spring gala, which has raised $2.5 million for the Building Terry Campaign. Alumni award winners are selected by emeritus members of the board, working from nominations submitted to the board. More information on awards criteria and the nomination process is available at www.terry.uga.edu/alumni/awards.