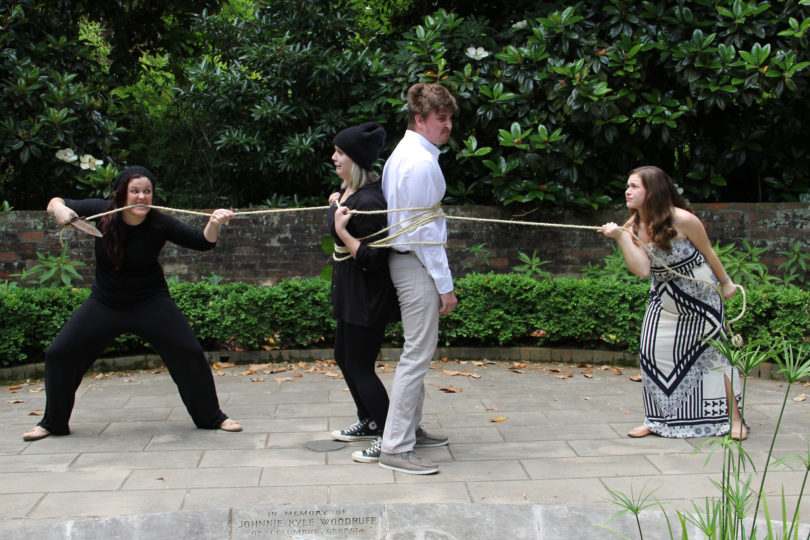 Athens, Ga. – The University of Georgia’s Maymester Shakespeare class in the department of theatre and film studies will present William Shakespeare’s “A Comedy of Errors,” directed by Ray Paolino with assistant director Stephanie Murphy.

Performances will be June 2 and 4 at 8 p.m. in the Cellar Theatre. A free performance June 3 at 6:30 p.m. in the UGA Founders Garden will be first come, first served; the audience is invited to bring blankets, chairs, food, beverages and insect repellant.

Tickets are $5, cash only, for the Cellar Theatre performances and can be purchased at the door before the show.

“A Comedy of Errors” tells the tale of two sets of identical twins separated at birth by a tragic shipwreck. In search of his long-lost twin brother, Antipholus of Syracuse (theatre major Christopher Stalcup) with his servant, Dromio of Syracuse (theatre major Hannah Klevesahl), come upon Ephesus, the unbeknownst hometown of their twin brothers, Antipholus of Ephesus (theatre major Tom Von Dohlen) and his servant, Dromio of Ephesus (M.F.A. acting student Stephanie Murphy). Comical mishaps result from mistaken identity, including arrest and false accusations of theft, madness, unfaithfulness and even demonic possession.

Because this production comes out of a Maymester class offered at UGA, the cast is comprised of a variety of students-from those with no previous acting experience to others with extensive training in acting, some of whom have Shakespeare training in particular. The students in the class learn to face a variety of challenges, including performing in venues inside and outside and under the same limited time constraints Shakespeare’s company might have had.

The show will be done without scenic or costume designers and will take a “found object” approach where all props, costumes and platforms will be supplied by using what is available in the classrooms, homes and closets of the students and directors.

Paolino, head of the department’s Master of Fine Arts acting program and Cortona study abroad program, aims with this production to answer the question of whether “young American actors can find confidence in the language, imagery and rhythms of Shakespeare’s plays without the benefit of scenic design, lighting tricks and stage machinery,” he said.

“I am excited about producing Shakespeare in the garden in Athens and continuing a tradition that has been in existence since 2004. I hope the Athens community will come out and be part of a social and theatrical event where their presence may be a bit more visible than other plays-and who knows? Maybe we’ll have surprises in store for the audience.”