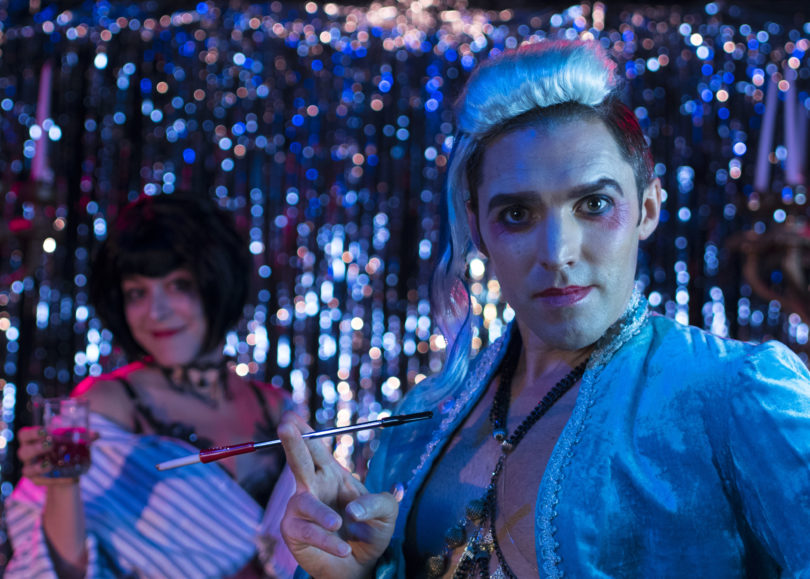 UGA Theatre presents “Cabaret” with music and lyrics by John Kander and Fred Ebb, and book by Joe Masteroff. It is directed by Freddie Ashley of Actor’s Express in Atlanta.

Based on Christopher Isherwood’s semi-autobiographical novella “Sally Bowles,” “Cabaret” creates a chilling portrait of life in Germany under the rising shadow of Nazism. The vibrant characters, including the sensitive ex-patriate British writer Cliff and the beguiling, free-spirited British Cabaret singer Sally Bowles, become increasingly entangled in their bohemian, decadent lifestyles, trying to ignore the ominous political changes taking place around them that threaten to upend their lives — and the world.

UGA Theatre has enlisted Ashley, artistic director of Actor’s Express, to helm this contemporary-yet-classic vision of Kander and Ebb’s Tony-Award winning musical. “Cabaret pulses with life as urgently as it did when it premiered half a century ago,” said Ashley. “With its dynamic characters, exhilarating score, and powerful narrative, it seduces audiences today into a world of beauty, sex, passion, and individualism — and then jolts them with a warning that it can all be taken away in an instant.”

Set in Berlin just prior to the onset of World War II, the play’s inhabitants vividly represent their unique moment of history, but at the same time resonate powerfully with our own time. “If you look at how the political climate has shifted in our own country and how artists have chosen to engage with controversial topics, I think the parallels are pretty easy to draw to ‘Cabaret’ and Weimar Germany,” Ashley said.

Creating an original and contemporary design for such a famous and beloved musical proved the greatest challenge for scenic designer Julie Ray, associate professor in the department of theatre and film studies.

“How do we re-examine this well-known musical with a fresh set of eyes?” asked Ray. “To design a space that includes a live band, dancers, and club goers, in addition to other locations, the space needs a fluidity to it.” Ray chose to portray the infamous Kit Kat Club as a found industrial space, highlighting the characters’ ingenuity and desperation. This aesthetic carries over into the work of costume designer Erica Manzano, who stated that she “envisioned the entertainers scrounging for whatever they could find in order to create an increasingly decadent spectacle for their audiences.”

“Cabaret” has been a mainstay of American musical theatre since its premiere in 1966. With the addition of guest director Ashley, UGA Theatre’s production aims to capture the energy that has contributed to the show’s creative relevance for the past 50 years.

“‘Cabaret’ is one of the greatest musicals ever written,” said head of the department of theatre and film studies David Saltz. “Bringing it to the Fine Arts stage with such an esteemed director has been incredibly rewarding for all of us, and we can’t wait to share this powerful, moving and exhilarating experience with our audiences.”