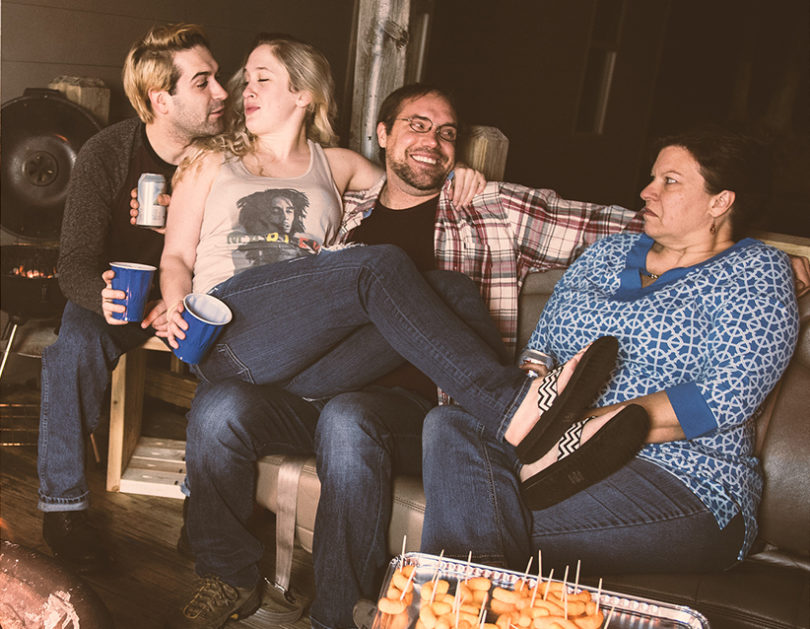 “Detroit” offers a darkly comedic take on serious questions about identity, happiness, and the unravelling of the “American Dream.”

“Detroit” is a fast-paced dark comedy that deals with the timely theme of the economic stagnation and uncertainty of America’s middle class. When Ben and Mary notice new neighbors moving into the long-vacant house next door, they invite them over for a barbecue. This seemingly innocuous evening of camaraderie soon veers into far more sinister territory when secrets are unearthed about the new neighbors.

“Detroit” premiered at Steppenwolf Theatre Company in 2010 and subsequently won the Obie Award for Best New American Play, going on to become a finalist for the Pulitzer Prize in Drama. In the New York Times review of the New York production starring David Schwimmer, Charles Isherwood described the play as “A sharp X-ray of the embattled American psyche as well as a smart, tart critique of the country’s fraying social fabric [that] is as rich and addictively satisfying as a five-layer dip served up with a brimming bowl of tortilla chips.”

The title of the play references the once-great American manufacturing city of Detroit, but the city is never specified within the play, which might take place in the suburbs of any midsize American city. “’Detroit’ in this play is more a state of mind, rather than a location,” noted director George Contini. “It really represents America in decline.”

D’Amour was inspired to write the play by a conversation with friends about what career they would choose if they could start over. Contini is fascinated by the way the play explores how Americans define themselves by their vocation. “In America, what we do for work is so closely aligned with ‘who we are’ and this play really deals with these characters having to confront their identity beyond work.” Contini believes this theme along with the contemporary nature of the play lends it a special significance for university students who will be graduating soon and thus entering society in a time of economic turmoil.

“It’s about dreams becoming nightmares, in a way,” Contini said. It’s about creating blueprints for the life you think you need to live, but most likely won’t. At its root, it is about our country’s ‘fruited plains’ becoming a ‘waste land.’”