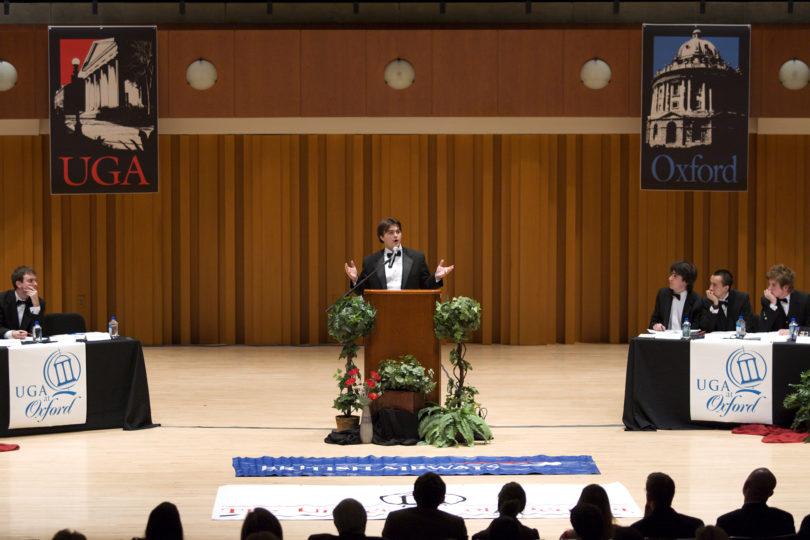 Athens, Ga. – The University of Georgia will debate the Oxford Union Debate Society Oct. 8 at 7 p.m. in the UGA Chapel. The hybridized British/American-style debate will feature an all-star team of UGA’s best debaters.

This will be the fifth installment of the UGA-Oxford debate and will be an opportunity for the UGA team to take the lead in the series and claim bragging rights for another three years.

“Like all previous iterations, the 2014 debate will be an extremely exciting event and it will showcase some of the best young thinkers and speakers from both campuses,” said James McClung, director of the UGA at Oxford Program. “The topic is timely, provocative, and well chosen. I personally look forward to a hard-fought debate, hopefully ending with a well-deserved UGA victory.”

UGA’s team also will be assembled specially for this event. The team will represent the wide variety of programs and schools UGA has to offer with students from the Georgia Debate Union, the Demosthenian Literary Society, the Phi Kappa Literary Society, the Law School, UGA’s Honors Program and several other student organizations.

The moderator is recent UGA master’s graduate Monica Kaufman Pearson, former WSB-TV lead anchor who in 1975 became the first African-American and first woman to anchor a 6 p.m. newscast in Atlanta. She then went on to secure a 37-year career in broadcasting in the city. Distinguished judges for the event will include Cecil Staton, University System of Georgia vice chancellor for extended education who earned his doctoral degree from Oxford University, and UGA President Jere Morehead.

The Oxford Union was founded in 1823 as an arena for the free exchange of ideas among students, and it soon became the forum for political debate in Oxford. Many British prime ministers have served as past presidents of the Oxford Union, and world figures such as Robert Kennedy, Mother Teresa, Yasser Arafat, Jimmy Carter and Nelson Mandela have addressed its members. The union team will be a hand-selected group of all-stars.

UGA at Oxford
For more than 25 years, UGA has fostered one of the leading study-abroad programs in Oxford. UGA continues to be the only program at a U.S.-public university to operate year-round in Oxford. Many UGA students join the Oxford Union upon arriving in Oxford. Because of UGA’s status in Oxford as a respected sister institution (UGA students hold associate membership at Keble College during term), a healthy rivalry has developed between Oxonians and UGA. For more information on UGA at Oxford, see http://oxford.uga.edu.