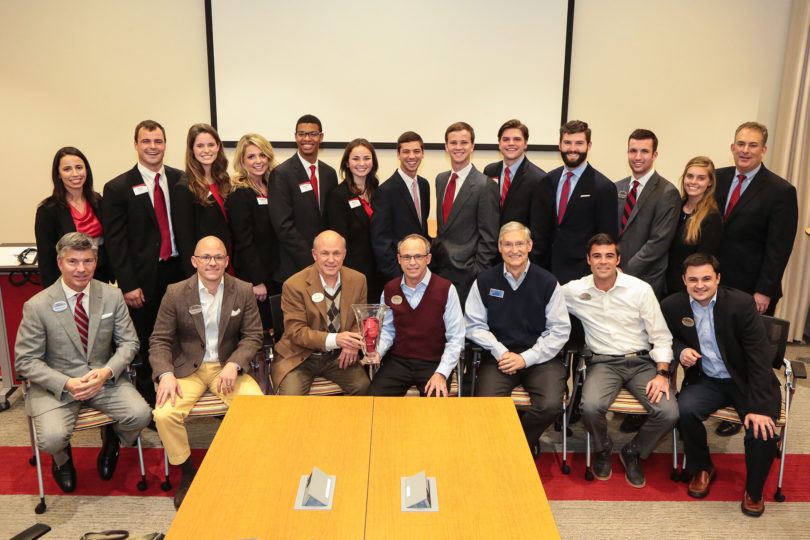 University of Georgia students and faculty surprised members of the Cathy family with the announcement of the S. Truett Cathy Leadership Suite at the Feb. 1 Chick-fil-A Officers Meeting in Atlanta.

The suite is scheduled to open in fall 2017 as part of the second phase of the Terry College’s Business Learning Community. The Institute for Leadership Advancement works to promote values-based, impact-driven leadership in students by developing effective communication, teamwork, innovation and adaptability in a changing environment. The institute offers an interdisciplinary certificate in leadership for undergraduate UGA students.

The $1.2 million donation was generated through a grassroots campaign within the Chick-fil-A organization. Gifts and pledges surpassing the $1 million goal were given in memory of iconic Georgia businessman and Chick-fil-A founder S. Truett Cathy. The additional funds will create an endowment named for Cathy and his wife, Jeannette McNeil Cathy, to benefit a student scholar within the Institute for Leadership Advancement

“Dad committed so much of his time and treasure to help young people realize their full potential,” said Dan T. Cathy, son of S. Truett Cathy and current CEO, chairman and president of Chick-fil-A. “My family and I are humbled and grateful for the leadership of David Farmer and David Salyers, who led this effort to honor the Cathy legacy in such a meaningful way. “

Chick-fil-A employees, operators and vendors joined ILA students and administrators to surprise the Cathy family with the naming of the suite at a recent Chick-fil-A officers’ meeting at the company’s headquarters earlier this month in Atlanta.

“S. Truett Cathy’s focus on responsibility, stewardship, excellence, integrity and purpose align well with the mission of the Institute for Leadership Advancement,” said Dean Benjamin C. Ayers. “The Truett Cathy Leadership Suite will be an enduring tribute to the ideals of servant leadership.”