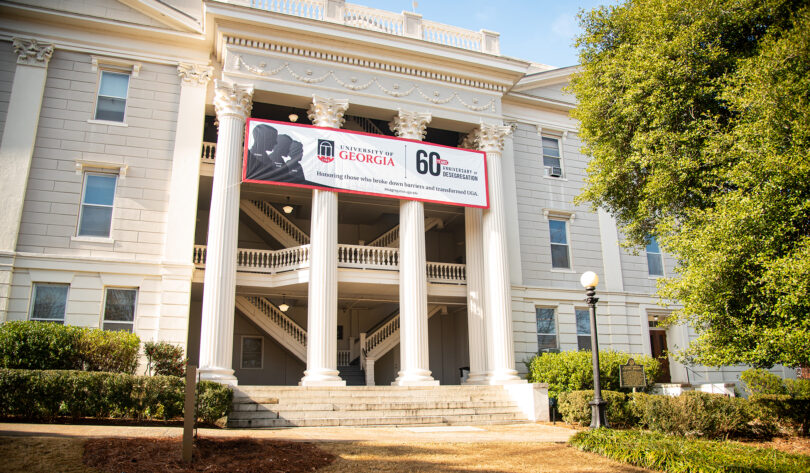 The University of Georgia will soon begin a comprehensive renovation of one of its most historic buildings on North Campus, the Holmes-Hunter Academic Building. The $30 million project was approved today by the University System of Georgia Board of Regents and is supported by a $15 million commitment from the Robert W. Woodruff Foundation.

The planned renovation of the Holmes-Hunter Building—named for Hamilton Holmes and Charlayne Hunter-Gault, the first African American students to enroll at UGA—will include an array of improvements that will significantly enhance functionality while also restoring historic features of the building and honoring Holmes and Hunter-Gault.

“We are so grateful for the continued partnership of the Woodruff Foundation and support of the Board of Regents for this important restoration,” said UGA President Jere W. Morehead. “This building, located beside our iconic Arch, honors two individuals who changed our institution for the better and left monumental legacies at UGA. I am very excited about today’s announcement to advance this significant project. This is a great day for UGA.”

The Holmes-Hunter Building, which houses the Office of Student Financial Aid, Office of Institutional Diversity, and the Office of the Registrar, among others, was originally two separate buildings: Ivy Hall, built in 1831; and the Library Building, built in 1860. The two buildings were joined in 1905 and connected with a three-story addition that added a courtyard, which was removed in a subsequent renovation. The building was named for Holmes and Hunter-Gault in 2001.

The planned renovation will restore the courtyard as a space that pays tribute to Holmes and Hunter-Gault; install an elevator and new stairs; integrate new mechanical, electrical and plumbing systems; optimize use of the building’s square footage; showcase the cast iron in the structure; and create a classroom from the original building design.

“The Woodruff Foundation is pleased to support the renovation of the Holmes-Hunter Building because of its significance to the University of Georgia,” said Woodruff Foundation President Russ Hardin. “Not only are we honored to pay tribute to two pioneers in the university’s history, but we are also proud to make an investment that will positively impact students now and in the future.”

Holmes and Hunter-Gault entered the Academic Building to register for undergraduate classes in 1961. Later that same year, Mary Frances Early also enrolled as a graduate student. Throughout 2021, the university has observed the 60th anniversary of desegregation with lectures, book readings, special displays and other events. Last month, the university commemorated the installation of markers on the West Lawn of the Tate Student Center to honor nine historically Black fraternities and sororities, including those of Holmes and Hunter-Gault.

“What wonderful news to learn that the Holmes-Hunter Building is not only getting older, but getting better, thanks to leadership at the University of Georgia that has continued to work on making it the place Hamilton and I hoped it would become once we walked into that building for the first time,” said Charlayne Hunter-Gault. “And knowing Hamp as I did and do, I can just see in my mind’s eye his smile reflecting similar joy and gratitude that the refurbishment of this symbolic edifice will help invigorate all of our ongoing efforts and those of future generations toward a more perfect union.”

Marilyn Holmes, the widow of Dr. Hamilton Holmes, stated: “It is so terrific that the Woodruff Foundation has decided to support this project. My children and I are thrilled and thankful that President Morehead would consider the renovation of this important building as one of his priorities.”

The Woodruff Foundation’s support will be combined with UGA institutional and private funding to fully support the Holmes-Hunter Academic Building renovation project. Planning and design will begin in early 2022 with restoration and construction beginning in late 2022 or early 2023.

The Woodruff Foundation’s support for the Holmes-Hunter renovation expands its already significant impact at UGA. In 2016, the foundation gave $30 million to UGA to support need-based aid—a gift that became the foundation of the successful Georgia Commitment Scholarship Program. To date, donors have created more than 600 endowed scholarships through the program, which has accounted for over $90 million in new commitments to need-based aid.