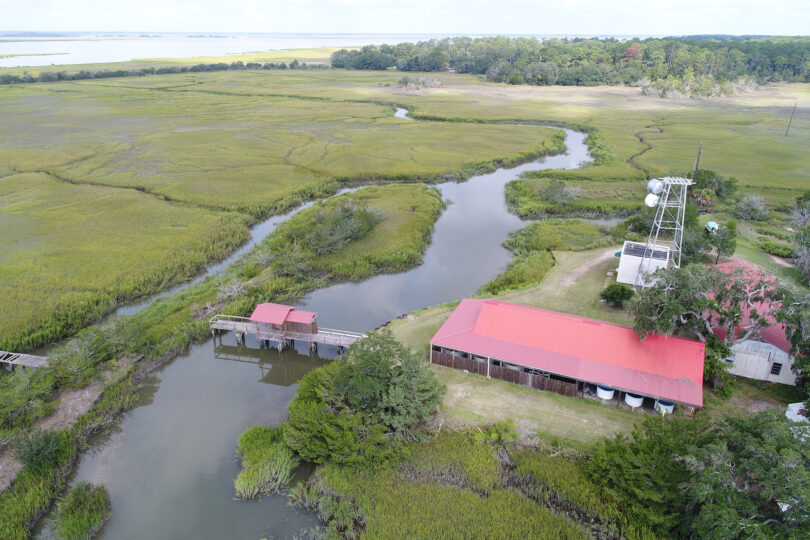 An overhead view of the microwave tower located on South End Creek on UGAMI’s campus. (Photo by Jacob Shalack)

The UGA Marine Institute (UGAMI) is a world-renowned field destination that supports research and education in coastal ecosystems. Its remote location on Sapelo Island has sometimes proven a challenge, though, especially where internet broadband is concerned.

Sapelo Island is connected to the internet by a single tower that exchanges data with the mainland approximately 9 miles away. Until recently, the radios on this tower were equipped to handle only 300 megabits per second (Mbps) worth of data, and only 100 of these were dedicated to UGAMI—not nearly enough to handle the scope of research completed there. This resulted in bottlenecks and frequent service interruptions.

That all changed in August with the installation of modern broadband technology that increased the island’s total bandwidth capacity to 2,400 Mbps, an eightfold improvement. This not only transformed internet connectivity on the island, but also dramatically improved UGAMI’s ability to conduct its important work without interruption.

“With the old system, the UGAMI network was often saturated, which affected everything from the business office to data-intensive research to teaching and videoconferencing,” said Merryl Alber, director of UGAMI and professor in the UGA department of marine sciences. “The boost has now alleviated that and provides us with room for growth.”

This was echoed by Jacob Shalack, UGAMI’s assistant director for operations. “Uploading research files was a nightmare,” he said, “and being able to use the new capacity makes it much more efficient.”

Shalack has worked on Sapelo Island for 15 years. One of the biggest changes, he said, will involve the drone imagery that researchers on the island use to document environmental patterns. Such in-depth imagery often results in huge files, which previously could take two hours or more to upload, but the new technology has cut this down to an average of 12 minutes.

The upgrade is also a promising development for Sapelo Island’s private community, which shares its broadband connection with the staff at UGAMI.

“Before the upgrade, the bandwidth that was available to all of Sapelo Island was equivalent to that of two or three average residential broadband accounts,” said Alber. “This was a limitation for residents, businesses and governmental agencies on the island.”

The existing microwave radios were installed in 2012, as part of a partnership between UGAMI and the Darien Telephone Company, the network provider for Sapelo Island. The two entities collaborated again to bring newer technology to the island.

Both UGA and Darien Telephone Company contributed to the new system, with the UGA portion of the funds provided by the Office of Research. Dodd also acknowledged the effort that Alber put in to make this happen.

“[She] was instrumental in securing funding and was the driving force for the project,” said Dodd.