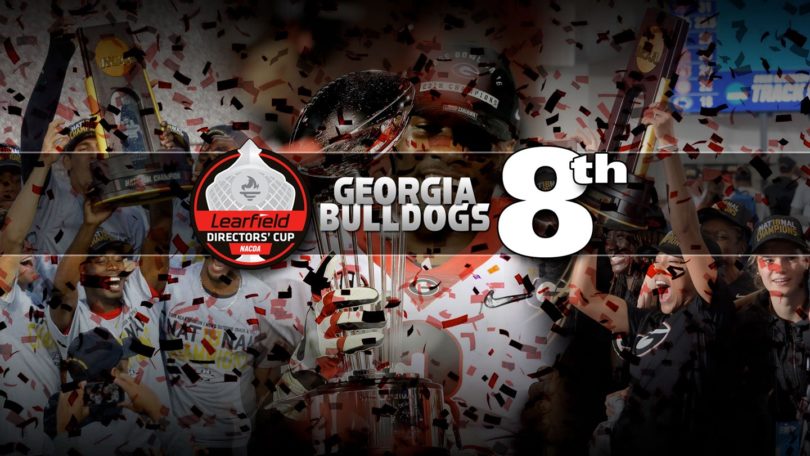 The University of Georgia finished No. 8 in the 2017-18 edition of the Learfield NACDA Directors’ Cup, the all-sports competition ranking collegiate athletic programs. The final rankings were released Saturday following the completion of the College World Series.

Georgia posted its 21st-consecutive top-20 effort, making UGA one of only six Division I schools to finish in the top 20 every year since 1997-98. The other schools to do so are Florida, North Carolina, Stanford, Texas and UCLA.

In 2017, Forbes Magazine ranked the University of Georgia as one of the top 25 universities that excel both academically and in sports.

“I’m very happy for our student-athletes, coaches and support staff for this top-10 finish,” said Greg McGarity, UGA’s J. Reid Parker Director of Athletics. “We shared so many memorable experiences across the board this year in NCAA competition, and the Cup is an indicator of our commitment to a broad-based athletic program.”

The National Association of Collegiate Directors of Athletics (NACDA) and USA Today began the Directors’ Cup competition during the 1993-94 academic year. Points are awarded based on each institution’s finish in up to 20 sports in Division I – 10 men’s and 10 women’s. UGA’s highest finish was No. 2 in 1998-99, one of 10 top-10 rankings for the Bulldogs. Within the SEC, Georgia is one of five schools with double-digit top-20 NACDA finishes over the past 21 years, joined by Florida (21), LSU (16), Texas A&M (13) and Tennessee (10).