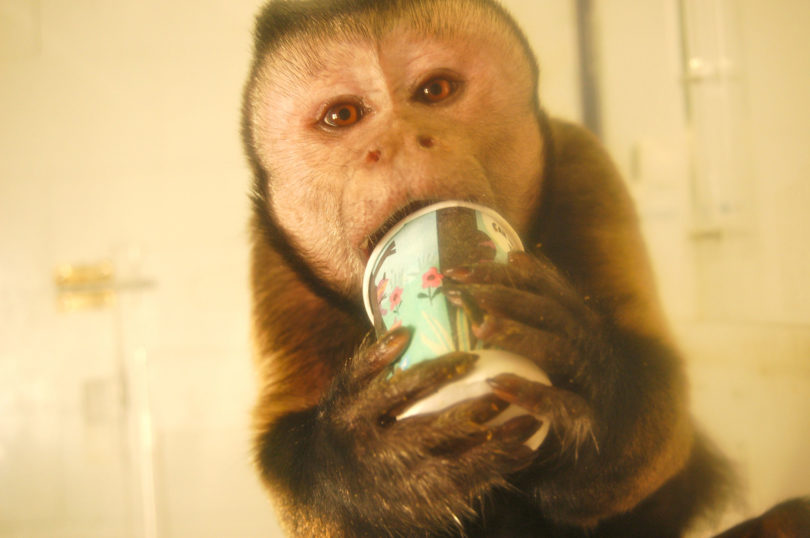 Athens, Ga. – Over the past 17 years, seven tufted capuchin monkeys at the University of Georgia have given scientists new insights into cognition and behavior not only of primates, but also humans. In spring 2014, the monkeys are retiring to Jungle Friends Primate Sanctuary, in Gainesville, Fla., a lush property that’s home to more than 100 New World monkeys.

Led by professor of psychology Dorothy Fragaszy, UGA researchers studied the UGA capuchins in the laboratory, and subsequently studied wild capuchins in the field. They documented capuchins’ routine use of heavy stones as hammers for cracking nuts, a discovery that excited primatologists around the world.

In the laboratory, they discovered similarities in tool use among monkeys, chimpanzees and ancestral humans, and showed that capuchin monkeys could solve problems that challenge young children – such as arranging objects in a sequence by size, and traveling through alley mazes presented on a computer screen. And they came to appreciate the extent to which the capuchins-and possibly humans-understand the world through action.

Now the seven capuchin monkeys are leaving UGA, said Fragaszy, who has studied the monkeys throughout their lives. But it’s not a sad farewell, it’s a retirement party.

“The capuchins are retiring to a home that’s as close to natural as possible,” said Fragaszy, who plans to visit them in their new home.

“They will have everything that monkeys who have grown up in captivity might possibly enjoy,” said Fragaszy. At Jungle Friends, the seven capuchins will live in outdoor habitats with trees, plants, shrubbery and bamboo; hammocks and platforms; and ropes, swings, rings, buckets and barrels that encourage natural swinging, climbing, and leaping behaviors. The natural habitat of the monkeys-which are about the size of a small housecat-is in the dry forests and rain forests of South America.

Fragaszy said that the seven capuchins, now in their mid- to late-twenties, can expect to enjoy 15 to 20 more years together at Jungle Friends. “They grew up together, and now they get to retire together,” she said.

Jungle Friends, a non-profit organization, has launched a campaign to raise approximately $420,116 to support the retiring capuchins for the rest of their lives. The funds will pay for the purchase of a five-acre property that will provide space for the seven UGA monkeys, plus expansion space for 12 additional monkeys on the Jungle Friends waiting list. It also will cover labor, food, veterinary expenses, and utilities. UGA has made an in-kind donation to support the capuchins’ retirement.

“We want UGA to be a model for other universities retiring their monkeys to permanent sanctuary homes,” said Dr. Chris King, associate vice president for research compliance, and director of animal care and use at UGA. UGA has no plans to continue this line of research, he said.

“UGA is a shining example to other universities who have research with monkeys that is ending,” said Kari Bagnall, founder and executive director of Jungle Friends.

Fragaszy’s research with monkeys, supported financially by the National Science Foundation, the National Institutes of Health, National Geographic and the Leakey Foundation, goes back to the beginning of her research career. But the seven capuchins in the UGA colony have been her focus since the colony was established in 1996 with four capuchins that were born at UGA and another four from a breeding colony in Atlanta. One of the eight capuchins died of natural causes last year.

Fragaszy’s studies have resulted in more than 100 scientific papers about capuchins. In 2004, she authored The Complete Capuchin, the biology of the genus Cebus. In 2009, she was awarded a Creative Research Medal from UGA for her career’s research on primate behavior.

Fragaszy is not alone in her appreciation of the capuchins’ contribution to science at UGA. “The capuchins have inspired many others’ careers,” she said. Almost 20 master’s theses and dissertations have been written based on research with the capuchins, and hundreds of UGA students have worked with them over the years.

Donations to support the capuchins at Jungle Friends Primate Sanctuary, a non-profit organization, can be made at junglefriends.org. A video of the monkeys and Fragaszy is available on Youtube at https://www.youtube.com/watch?v=IH_OlvyA0Gs.