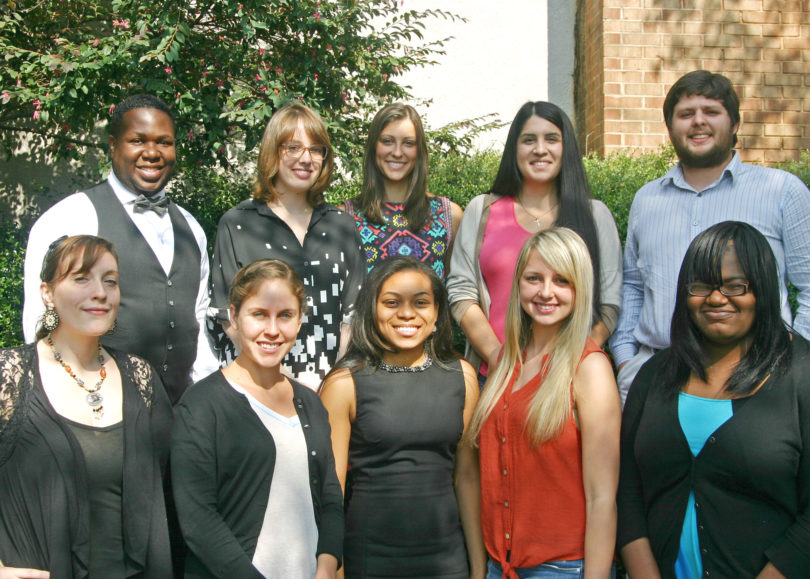 Twelve undergraduate and graduate students have been named McGill Fellows by the Grady College of Journalism and Mass Communication. They are (front row

Athens, Ga. – Twelve undergraduate and graduate students have been named McGill Fellows by the Grady College of Journalism and Mass Communication.

They were selected by a faculty committee “for their strengths in academics, practical experience and leadership,” said John F. Greenman, Carter Professor of Journalism, who chaired the committee.

The McGill Fellows will participate in the McGill Symposium, which brings together students, faculty and leading journalists to consider what journalistic courage means and how it is exemplified by reporters and editors. The McGill Symposium will be held Oct. 8 from 2:30-5 p.m. and Oct. 9 from 8:30 a.m. to 3 p.m. in Room 238 of the Journalism Building.

The McGill Fellows will attend the event and be introduced at the McGill Lecture, which will be held at 4 p.m. in Room 250 of the Miller Learning Center. Christine Brennan, sports columnist for USA Today, will be the featured speaker.

The McGill Fellows will help select the sixth recipient of the McGill Medal, awarded annually to a U.S. journalist whose career has exemplified journalistic courage.

Also, the McGill Fellows will have first priority to enroll in a one-hour, independent study on journalistic courage, to be taught by Greenman spring semester.

This is the seventh class of McGill Fellows. The first class was selected in 2007.

For more than 30 years, the McGill Lecture has brought significant figures in journalism to the UGA to honor Ralph McGill’s courage as an editor.

McGill, while editor and publisher of The Atlanta Constitution, was regarded as the “conscience of the south,” using the newspaper’s editorial pages to challenge segregation in the 1950s and 1960s. McGill was awarded a Pulitzer Prize in 1958 for “long, courageous and effective leadership.”

The McGill Symposium is funded by the McGill Lecture Endowment.