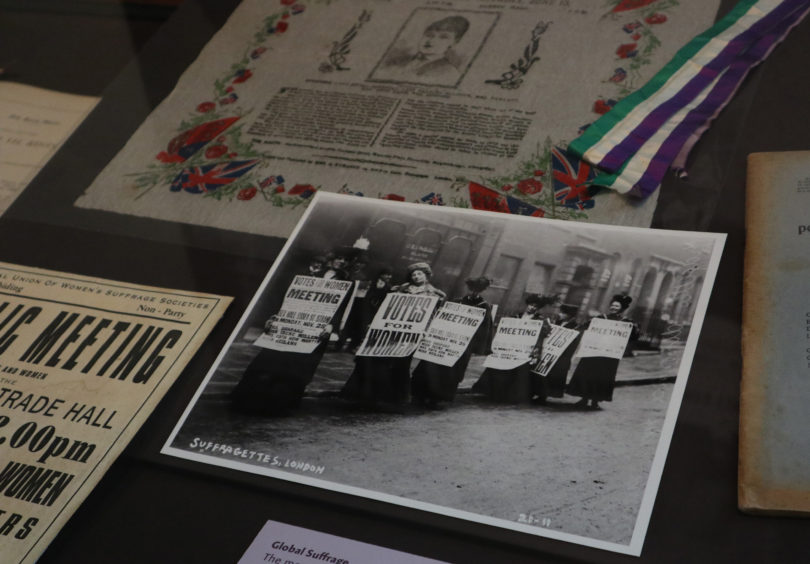 Memorabilia from the women’s suffrage movement will be on display at the University of Georgia’s Richard B. Russell Building Special Collections Libraries, as part of an exhibit on the 100th anniversary of the women’s right to vote. (Submitted photo)

On the 100th anniversary of the certification of the 19th Amendment granting women in the United States the right to vote, the University of Georgia Libraries will celebrate with a virtual tour of historical artifacts from the women’s suffrage movement.

The Facebook Live event, scheduled for 2 p.m. on Aug. 26, shares the Hargrett Rare Book and Manuscript Library’s exhibition “The Strategies of Suffrage: Mobilizing a Nation for Women’s Rights” with audiences across Georgia and the nation.

“We tend to think of landmark events in history that gave everyone a right overnight, but things are often more complicated,” said exhibition coordinator Jan Hebbard, who will lead the virtual tour. “Like the struggle for other civil rights, the battle to achieve women’s suffrage in the United States lasted for decades and suffragists had to overcome a lot, including divisions and differences within their own ranks, to achieve the end goal.”

“The Strategies of Suffrage” exhibition, which is currently on display at the Richard B. Russell Building Special Collections Libraries, explores the women’s suffrage movement, from the 1848 Seneca Falls Convention to the certification of the 19th Amendment on Aug. 26, 1920.

The virtual tour will feature artifacts such as pamphlets, newspapers, postcards and play scripts that convey the nearly century-long story of how women secured enfranchisement and campaigned for women’s civil rights in the United States.

“Tour stops will cover everything from suffrage fashion and parades, to the slow start of the suffrage campaign in the South and exclusion of African American suffragists,” Hebbard said.

This exhibit, which was curated by Sidonia Serafini, a doctoral student in UGA’s department of English, was made possible with the collections of and support from the Lucy Hargrett Draper Center and Archives for the Study of the Rights of Women in History and Law.