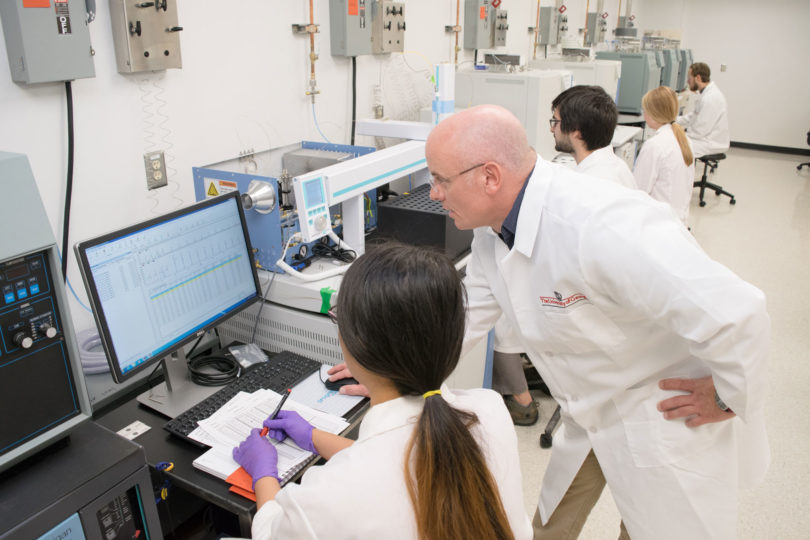 The Center for Applied Isotope Studies at UGA already is world-renowned, but the center’s role in the scientific community just became even bigger.

Following an expansion of the facility on Riverbend Road and acquisition of new instrumentation, the 24,000-square-foot center is now home to the largest stable isotope lab in North America, surpassing the University of California, Davis, and cementing its position as an industry leader.

Stable isotope analysis, which is the focus of the latest lab expansion, is the measurement of carbon, nitrogen, oxygen, deuterium and sulfur isotopic signatures in environmental and biological samples. It can be used to track everything from animal migration patterns and ocean temperatures, help reconstruct ecosystems, monitor pollution or test products.

“We’re rebuilding and reimagining this center into something that I believe is truly phenomenal; as a whole, there’s no place like this in the entire United States,” said Jeff Speakman, director of CAIS. “Many smaller labs struggle because they are not able to reinvest in the latest and greatest technology, so being able to continue to invest into new instrumentation is key to staying ahead of the game.”

The center, which operates under the Office of Research, was founded in 1968. It is home to one of the oldest radiocarbon and stable isotope laboratories in the world. Today, 12 full-time scientists and 13 technical staff provide analytical services, conduct research and engage in teaching students from a variety of disciplines.

The center’s recent accreditation to conduct stable isotope and radiocarbon analyses under the International Organization for Standardization, ISO/IEC 17025:2005, is recognized universally as the highest level of quality attainable by a testing laboratory, and the ASTM International certification makes the center home to one of only two laboratories in the U.S. certified to determine whether bio-based products meet USDA standards.

“The growth in demand for services has allowed us to reinvest into the facility, and that ultimately allows us to give students more opportunities to conduct research and engage the researchers at UGA,” said Speakman, who came to UGA from the Smithsonian Institution in 2011.

Additions to the new lab include three isotope ratio mass spectrometers and two flash elemental analyzers, which measure the isotopes, made by Thermo Scientific, and two gas benches used to prepare the samples. In total, the center maintains 17 instruments capable of measuring stable isotopes of carbon, nitrogen, hydrogen and oxygen.

“The new gas bench is going to open up all kinds of possibilities,” said Tom Maddox, staff scientist and manager of the stable isotope laboratory. “Now you can process hundreds and hundreds of samples, and it’s effective, convenient and incredibly accurate—within minutes you have your answer.”