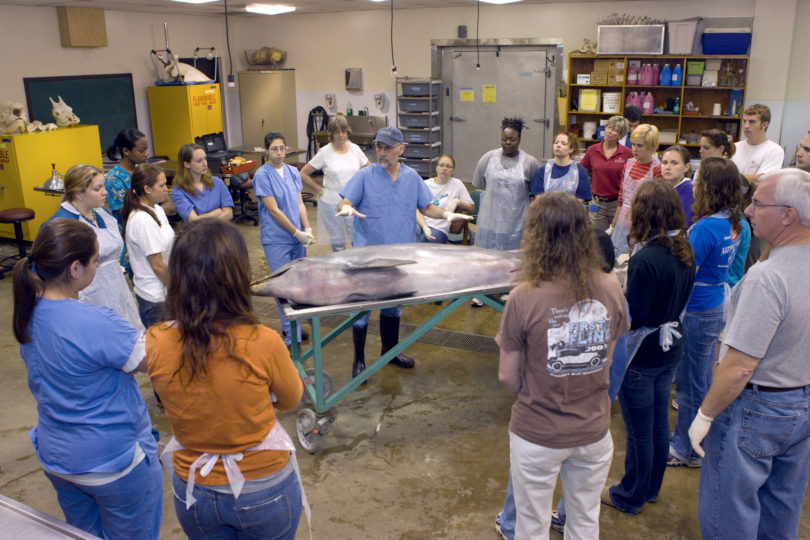 Think of it as CSI: College of Veterinary Medicine Edition.

The victim is an unidentified bottlenose dolphin that washed onto the beach at Georgia’s Sea Island. Its cause of death is unknown.

“We’re going to try to find out what killed this animal,” said John Schacke, an adjunct professor at the Institute of Ecology.

Schacke brought 11 students from his undergraduate marine mammals class to the College of Veterinary Medicine for an animal autopsy, or necropsy, led by Daniel Odell, a senior research biologist at the Hubbs-Sea World Research Institute in Orlando. Cheri Roberts, a lecturer in the veterinary medicine anatomy lab, assisted as veterinary students gathered for a rare opportunity to work with a dolphin.

When the victim washed ashore-dead-it was picked up by a volunteer group known as the Marine Mammal Stranding Network and later donated to the university.

Opening the dolphin up, Odell and the students found excess fluid in its body cavity-a sign that something was very wrong with the animal when it died. Yellow fragments of the protein fibrin suggested inflammation was somehow involved.

Students gathered to look, some snapping photos with their digital cameras, as Odell pointed to the cause of death.

“A stingray barb,” he said.

The re-creation of the crime goes like this: The victim is swimming along the shore, its belly near the sand. It comes too close to a stingray that-in a proverbial split second-strikes with its tail.

The dolphin flees, but with the stingray’s barb embedded in it. The barb works its way deeper into the animal as it swims. Eventually, the barb punctures the dolphin’s intestines, setting up an infection and inflammation that led to the fluid, the fibrin accumulation and-eventually-the victim’s death.

Most veterinary students will see cats, dogs, horses and cows, but rarely-if ever-a dolphin. And watching Odell systematically look for clues only reinforced what they learned in pathology last year.

With the case of the dolphin closed, Schacke looks forward to repeating the experience for future students.

“Next year hopefully we can bring another animal,” he said, “maybe a manatee or a pygmy sperm whale.”