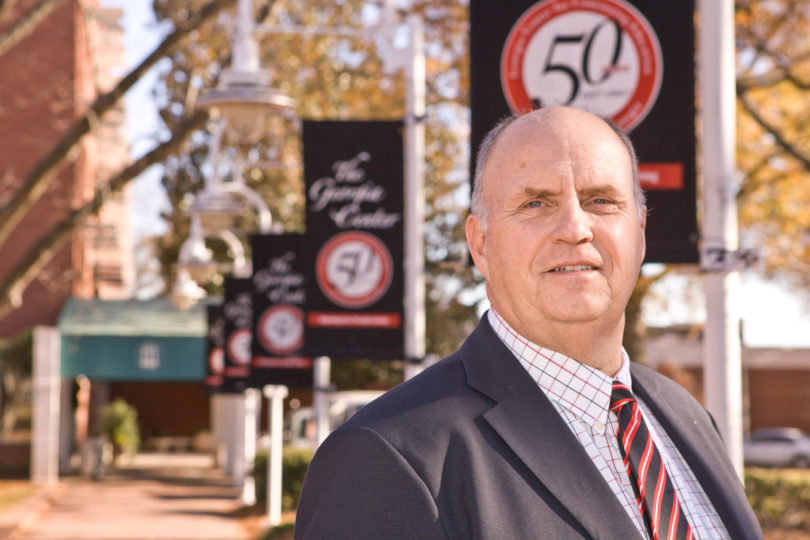 William Crowe is the new director of the Georgia Center for Continuing Education Conference Center and Hotel.

From college linebacker to college chief of police and junior college president, William Crowe, the new director of the Georgia Center for Continuing Education Conference Center and Hotel, brings a unique blend of experiences to his new job.

Crowe said his varied experiences prove useful to him every day on the job. Working as a police officer taught him how to deal with people and working as president of Tyler Junior College in Tyler, Texas, taught him the administrative and academic skills needed for his new job.

He now puts those skills to use managing the hotel, overseeing professional conferences and working to expand the continuing education courses, like photography and creative writing, the center offers and will soon offer at the new UGA Gwinnett campus.

“We have a great opportunity to expand and grow all of our continuing education opportunities and try to deliver statewide,” said Crowe. “I really do think that the Georgia Center, as the continuing education arm of the University of Georgia, which is a land-grant institution, has a mission that is really statewide and we ought to be doing more things on a statewide basis to deliver the University of Georgia.”

Art Dunning, vice president for public service and outreach, said that Crowe’s broad leadership and administrative skills were essential to his hiring.

“The Georgia Center is one of the best university-based conference centers in the nation, and with the hiring of Bill Crowe, our goal is to become the best,” Dunning said.
Crowe began work at the Georgia Center on Oct. 1 after overseeing homecoming festivities at Tyler Junior College Sept. 29 allowing only one day off, which he spent flying from Texas to Georgia.

He already had a house in Five Points and had always planned on moving to Athens with his wife Debbie, a university alumna and former drum major of the Redcoat Band. And after 14 years of heading up the junior college, Crowe was ready for a change and jumped at the chance to work at the nationally recognized Georgia Center.

Crowe is the first to admit that his career path was a little unusual, and he chalks it up to being in the right place at the right time.

“I was very fortunate at Tyler,” he said. “In the 24 years I was there, I had lots of opportunities to do lots of things. I was just very fortunate to have people who thought I could do some things that were quality work, that you wouldn’t expect from someone of my background.”

The boy who used to dream of being a professional athlete moved on to campus police work after finishing college with a bachelor’s degree in business administration, providing security for the football team at games.

“When you’re young, what you set out to do isn’t usually what you end up doing,” he said.

After six years of police work at UT-Austin, Crowe left for Tyler Junior College to serve as chief of police and help the department move from a “security guard system” into a full-fledged, gun-carrying department.

He worked on getting his master’s degree and Ph.D. and moved to the student affairs side of the college, serving as a dean and ultimately college president for 14 years, counting the one year he served as interim president.

Now at a university three times the size of his previous college,  Crowe said he’s getting used to UGA; learning new names and routines as well how to navigate the labyrinthine corridors of the Georgia Center.

“I was at the same place for so long,” he said. “Just the excitement of being somewhere different, somewhere new or doing some different things, is a lot of fun.”