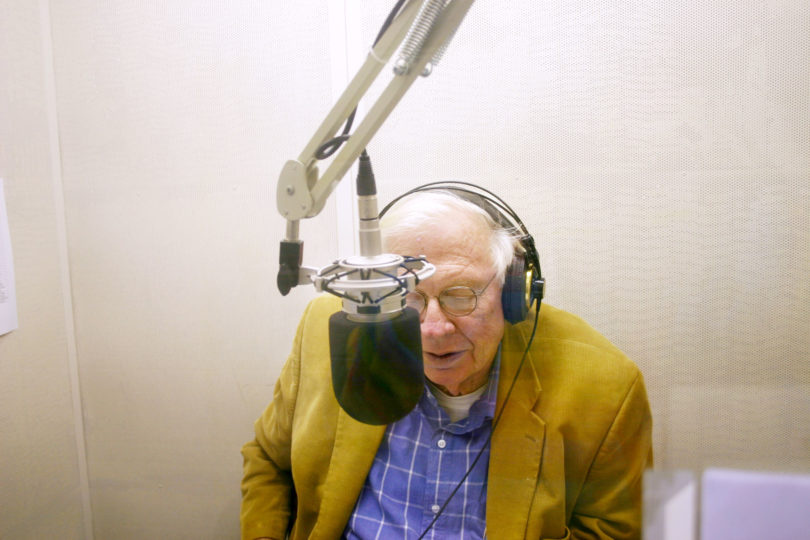 Veterans who lost their sight wanted to attend college on the GI Bill of Rights, but they faced the obstacle of reading textbooks. The soldiers sought out the New York Public Library’s Women’s Auxiliary for help, and soon the library’s attic served as a recording studio, where auxiliary members taped themselves reading textbooks on vinyl phonograph discs.

Today, Reading for the Blind and Dyslexic is a national nonprofit operation using state-of-the-art digital technology and serving 141,660 members worldwide. It distributed 258, 918 textbook titles in 2005, which helped students from kindergarten to graduate school, as well as working professionals.

The RFB&D chapter in Georgia-which is one of many organizations that benefit from UGA’s Campaign for Charities, held this year through Dec. 4-began in 1953. Each week, 176 volunteers record themselves reading at the Athens unit, sometimes with the aid of a recording monitor who directs the session and catches any mistakes.

Joe Berrigan, professor emeritus of history, began volunteering at RFB&D in the late 1960s and has been ever since, dedicating more than 5,000 hours to the organization. He records five days a week at 9 a.m. sharp, with few exceptions. He’s a “general reader”-meaning he reads just about anything.

“I primarily do history, scripture, philosophy, theology and anything to do with Latin, Greek or some modern languages like Italian,” he said.

“I continue doing it because I enjoy the experience and feel that we should all give back as much as we can to those who need it, and the blind or seeing-impaired surely fit that category,” he added. “I have enjoyed the whole experience for these almost 40 years and find the people I have met one of the special attractions.”

But she already had a taste for the work before she started formally volunteering. As a graduate student at the University of Wisconsin in Madison, Jones and several friends took turns recording themselves reading novels on their reading list for a visually impaired colleague. As a professor, she’s had several students who were visually impaired.

Like Berrigan, Jones appreciates the community of volunteers who keep RFB&D going.

“The people who run the center are just wonderful-very knowledgeable and wonderful to work with,” she said.

Campaign for Charities contributions from faculty and staff go to United Way agencies, Georgia Shares members and other organizations approved through the State Charitable Contributions Program.

In addition to pledges by faculty and staff, the UGA Athletic Association will contribute 25 cents for every dollar UGA employees contribute beyond $200,000, up to a match of $50,000.

The pledge form and a list of participating charitable organizations are available at www.busfin.uga.edu/­charities/.