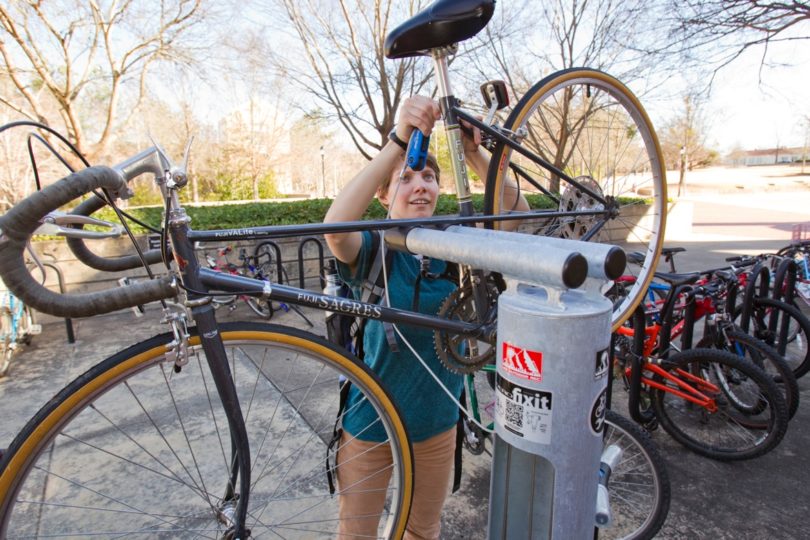 UGA student Katie Bridges fills up the tires and adjusts the seat on her bicycle at the bicycle repair station at the Ramsey Student Center for Physical Activities.

Athens, Ga. – The University of Georgia is making cycling around campus even easier for its growing bike-riding population with several new repair stations.

Thanks to funding provided by the UGA Office of Sustainability, Facilities Management Division and Recreational Sports, four bicycle repair stations were installed recently—in Myers Quad and at the Miller Learning Center, the Main Library and the Ramsey Student Center for Physical Activities, where staff from UGA Outdoor Recreation teaches bike repair clinics to interested students.

Each station contains a tire pump and basic tools so that campus cyclists have the ability to perform maintenance-related tasks without taking their bikes off campus to be fixed. A QR code on each station also will allow bicyclists to view detailed instructions on their smartphones.

The program was launched by Joseph Robinson, an undergraduate in the UGA Warnell School of Forestry and Natural Resources and a student worker in the Outdoor Recreation program. He received a campus sustainability grant from the Office of Sustainability to carry out his vision for a network of bike repair stations at the university.

“I had heard from many students that they would ride their bike more, but they had a small issue with their bike that they did not have immediate resources to fix,” Robinson said. “By providing these stations, we hope to allow students to make these small repairs and feel more confident riding their bikes—knowing that if a problem arises, they will not be stranded.”

“We installed one repair station at the Ramsey Student Center in January 2013,” he said. “It seemed to get a lot of attention and use, which made me think that additional stations around campus would be a great addition.”

The stations, called Fixit Bike Repair Stands, are manufactured by the Minneapolis-based Dero Bike Rack Company. They feature metal stands, each with a slot, or saddle, designed to suspend a bicycle for repairs. They include tools-a variety of wrenches, screwdrivers and other implements-attached to the stands with sturdy cables.

The Office of Sustainability awarded nine campus sustainability grants this year. Robinson’s repair station program is one of three that focus on enhancing cycling culture at UGA.

The second grant project is headed by Shafkat Khan, a doctoral student in the Odum School of Ecology. He is partnering with Bike Athens to establish a co-operative to help teach bicycle maintenance and repair skills to UGA students, faculty and staff. And Sahana Srivatsan, a junior in the School of Public and International Affairs, is using his grant to expand UGA’s Bulldog Bikes campus bike sharing program.

For more information on campus sustainability grants and other initiatives of the UGA Office of Sustainability, see http://www.sustainability.uga.edu/.