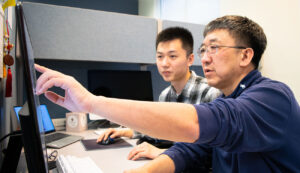 Ying Xu, right, is a professor of biochemistry in the Franklin College of Arts and Sciences. (Submitted photo)

Ying Xu, professor of biochemistry in the Franklin College of Arts and Sciences, was elected a Fellow of the Institute of Electrical and Electronics Engineers.

The IEEE publishes approximately one-third of the world’s literature in computer science and the electrical and electronic engineering fields. It also co-sponsors more than 1,900 international conferences annually. As the largest professional organization for the advancement of technology, IEEE has more than 400,000 members worldwide.

Each year, the IEEE Fellow Committee recommends less than 0.1% of members to receive its highest honor and be conferred by the board of directors as an IEEE Fellow.

“I’m very grateful to receive this award. Even though my education was in computer science, my research hasn’t always been in a traditionally recognized computer science field. Having the largest organization of this kind acknowledge my work is a great honor,” said Xu.

After graduating from the University of Colorado at Boulder in 1991, Xu got involved in the Human Genome Project at the Oak Ridge National Laboratory, a federal research lab under the Department of Energy, and developed some of the first computer programs to identify genes encoding proteins. In 2003, he joined UGA and began focusing on microbial genomes and the early detection of human cancers.

In addition to being a computational biologist and bioinformatician, Xu is a Georgia Research Alliance Eminent Scholar of Biochemistry and Molecular Biology in the Franklin College of Arts and Sciences and the Institute of Bioinformatics.

Xu also served as the editor-in-chief of the IEEE Transaction on Computational Biology and Bioinformatics for four years.

“Elevation to Fellow in an organization as prestigious as IEEE signals the impact of a significant body of research accumulated over a successful career, as well as the professional respect and recognition of one’s peers,” said Karen Burg, vice president for research. “Dr. Xu has been a leader in merging the fields of computer science with biochemistry and molecular biology, and his work has led to tremendous advances in multiple applied fields. I congratulate him on this wonderful achievement.”

Xu’s elevation to IEEE Fellow highlights the growing impact of UGA’s growing research and innovation ecosystem. Across campus, the university is accelerating research commercialization, increasing university-industry collaboration and expanding research at all levels.