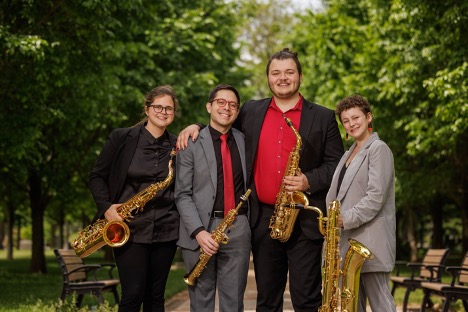 Students in the Hugh Hodgson School of Music Saxophone Studio have been busy, and their hard work and professionalism has gotten them national recognition. Mixed Media saxophone quartet was awarded the Gold Medal in the senior wind division of the 49th annual Fischoff Competition, held at the University of Notre Dame in South Bend, Indiana, May 20-22.

Established in 1973, the Fischoff National Chamber Music Association sponsors the world’s largest chamber music competition, drawing applications from hundreds of chamber ensembles from all over the world. Select groups are invited to the live rounds of the competition after submitting a preliminary recording.

Members of the quartet include Michael Chapa, soprano saxophone; Julien Berger, alto saxophone; Lindsey Welp, tenor saxophone; and Grace Gelpi, baritone saxophone. Connie Frigo, professor of saxophone, is their primary coach, with support from Brandon Quarles, lecturer of saxophone. They have been playing together for less than a year and believe their friendships and shared discipline helped fuel their early success.

“Embracing each of our backgrounds and experiences in music while keeping our minds open to criticism and suggestions from others came easily to us. This made our creative process more efficient, and we were able to learn and interpret music at a faster pace,” said Chapa.

During the academic year, the quartet rehearsed six to eight hours per week and attended weekly one-hour coaching sessions with Frigo. Once the spring semester ended, they began rehearsing daily in preparation for Fischoff.

“We spent a good deal of time discussing our repertoire selection so as to construct a stylistically diverse program that shows off a variety of our strengths as an ensemble,” said Gelpi.

Specific to an ensemble that wishes to compete, Mixed Media and Frigo spent a lot of time discussing repertoire choices and flow of their programs, strategies to learn the music as efficiently and effectively as possible, and how to stay energized and inspired during the yearlong preparation process. Creative pop-up performances in the school of music along with organized concerts were a critical part of their process.

“Mixed Media had a strong independent and consistent work ethic from the moment they formed as a quartet in summer 2021, which played a defining role in their growth during the year,” said Frigo.

The competition semifinals and finals were streamed from Notre Dame, so family, friends and faculty were able to watch live as the quartet advanced to their gold medal program.

“Everything seemed to click for us during that performance. It is rare that someone my age gets the chance to play music for such an audience at such a prestigious competition, and I was so fortunate to be given that opportunity,” said Berger.

“I noticed myself getting progressively more comfortable with the presence of a large audience with each subsequent performance. I remember looking out into the audience in the quarterfinals, seeing world-renowned judges, and feeling immense pressure to perform well. By the double gold performance, I was able to think about performing for the audience, not only to place well in the competition but to involve them in the experience,” said Welp.

Frigo said how incredibly proud she was of their gold medal award at Fischoff and their first prize win at the national Coltman Chamber Music Competition, especially after two years of pandemic-related cancellations and virtual music-making. “They are making music at a remarkably high level that exudes joy, resilience and imagination [and that’s] a beautiful win regardless of the competition outcome,” she said.

As gold medalists, Mixed Media was awarded a cash prize sponsored by Ann and Paul Divine and Nancy Hawkins. In addition, they will go on the Winner’s Double Gold Tour in September 2022, performing concerts and educational outreach at venues in Indiana, Pennsylvania, Michigan, Illinois, and Iowa. This year is particularly special because, for the first time, past Fischoff Gold winners Akropolis Quintet are sponsoring a full scholarship for them to attend their Akropolis Mastermind career development workshop. Videos of their performance during the finals is posted on Fischoff’s website.