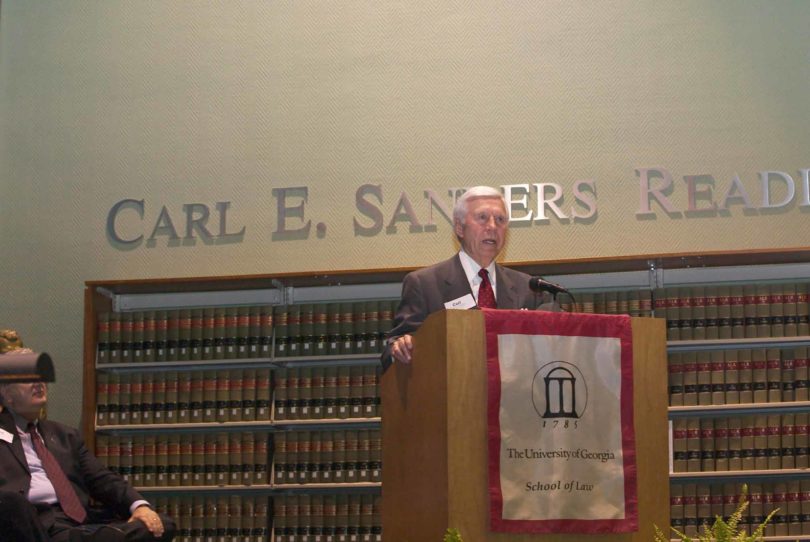 Athens, Ga. – Carl E. Sanders and the University of Georgia enjoyed an association that spanned more than 70 years, beginning with his enrollment in 1942 on a football scholarship. He withdrew from school to pilot bombers during World War II, but returned to UGA, played on the 1945 team that won the Oil Bowl, and received a law degree in 1948.

He practiced law in his native Augusta and in 1954 was elected to the Georgia House of Representatives. He later served three terms in the Georgia Senate before winning election in 1962 as governor.

Known as “Georgia’s Education Governor,” Sanders oversaw the investment of more than $2 billion in educational and training programs, including more than $552 million spent on the state’s public colleges and universities. Expenditures on buildings in the University System of Georgia topped $176.5 million-more than had been spent in the previous 31 years-and salaries for the system rose by 32.5 percent. An educational television network was created, vocational-technical education was expanded statewide and the state’s junior college system was enlarged. UGA received more than $40 million in construction funds while Sanders was governor, resulting in the start or completion of a dozen buildings, and the university’s faculty doubled in size.

A staunch supporter of UGA’s School of Law, Sanders was instrumental in providing state funding for an expansion of the law school building that included a new building for the law library. He also secured $1 million in state funds to buy books for the library. After leaving office, he made significant personal gifts to the law school, including $1 million in 2002 to establish an endowed professorship in the school. The reading room in the law library was named in his honor.

He has been president of the Law School Association, served on the school’s Board of Visitors, and headed the fundraising campaign to build Dean Rusk Hall. He donated his gubernatorial papers, photographs and other memorabilia to the library. He also served as a trustee of the University of Georgia Foundation and as president of the UGA Alumni Association.

Statement from University of Georgia President Jere W. Morehead:
“The University of Georgia community mourns the loss of one of its finest alumni and one of the state’s greatest champions for public higher education,” said UGA President Jere W. Morehead. “Although his lifelong dedication to this institution can be seen across our entire campus, Carl Sanders left his greatest impression on our School of Law, which has benefited in so many ways from his profound wisdom, dedication, and loyalty. As a fellow alumnus of the university and the School of Law, I join others as we express our deep appreciation for his unyielding support for the university and the School of Law. Gov. Sanders’ impact on this state will be remembered in so many ways, but UGA remembers him, in particular, for his many significant contributions to the betterment of our university and our School of Law.”

Statement from Dean Rebecca H. White of the UGA School of Law:
“Our state has lost a great man, and our law school has lost one of its most important and influential graduates. Carl Sanders understood the importance to our state of having a first-class law school and took the steps necessary to make that happen, so that we now have, as he predicted, a law school of “such excellence that no citizen of Georgia need ever leave [this] state because a superior legal education is available elsewhere.” We are forever in his debt, and I will miss deeply his friendship, wise counsel, loyalty and support.”