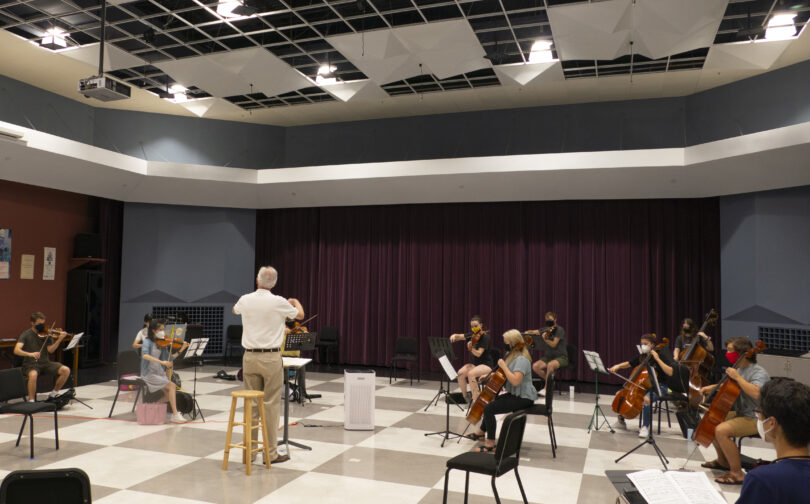 The Oct. 1 concert will be performed by members of the UGASO string section. (Submitted photo)

Members of the University of Georgia Symphony Orchestra will perform a socially distanced concert on the Hodgson Hall stage Oct. 1 at 7 p.m. The concert will be live-streamed on the Hugh Hodgson School of Music website.

The UGASO is the only ensemble able to hold in-person rehearsals at the Hugh Hodgson School of Music, with other large ensembles holding virtual rehearsals. This concert will be performed by members of the UGASO string section to allow for safe playing with all performers wearing masks. The UGASO has been able to rehearse in smaller groups of ten in the Orchestra Room, which allows for safe distancing.

“This is the first time we have been together since February 28. Members of the UGASO will gather in a safe environment to perform the Josef Suk Serenade for Strings. Suk was a student of Antonín Dvořák and composed this Serenade when he was 17 years old,” said Mark Cedel, Director of Orchestral Activities at the School of Music.

Suk composed the Serenade for Strings in E flat major, Op. 6, in 1892 while he was studying at the Prague Conservatory. After noticing a consistent melancholy in Suk’s music, Dvořák recommended he try to write some music with some cheer in it, to which Suk responded with this piece. As the tradition towards larger orchestras and longer symphonies in the nineteenth and early twentieth centuries continued, some composers such as Suk decided to begin writing for the opposite. The strings orchestra was a nice change and inspired a trend back to the classical serenade-divertimento tradition, which makes it the perfect choice for a socially distancing and safe program for the Hodgson School’s strings players.

Further safety measures have been put in place including having each section have their own space and their own door to enter/exit through in Hodgson Hall. Bass players will arrive 10 minutes early as they are the largest instruments. The piece is 25 minutes in length. No audience will be present, and the concert will be live-streamed.

“We believe that this will be a strong boost to student morale. They have all been rehearsing the same piece in small groups, and the chance to play together as a large ensemble will be very beneficial to their academic development,” said Pete Jutras, Director of the School of Music.

The Oct. 1 concert will be streamed for free online at music.uga.edu/live-streaming at 7 p.m.

Those interested in supporting the school can consider making a gift to the Thursday Scholarship Fund: gail.uga.edu/ThursdaySeries. Contact Sara Emery at semery@uga.edu with questions.

To stay updated on events and news at the Hodgson School, follow across social media platforms via @ugamusic.