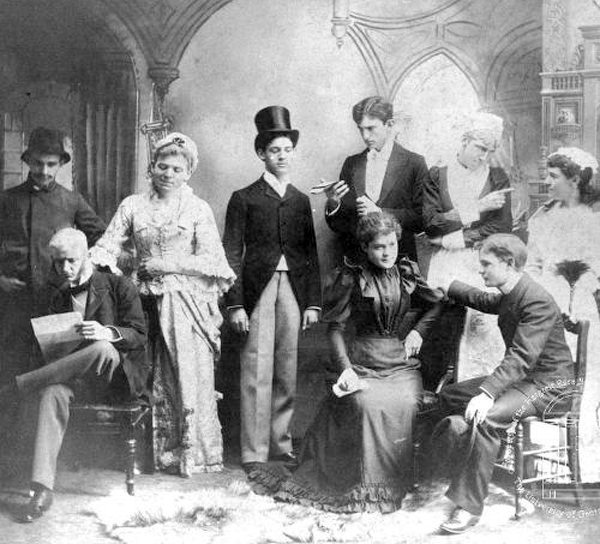 Before University Theatre at UGA

Athens, Ga. – University Theatre at the University of Georgia is celebrating its 80th season in 2012-2013, and its lineup is a reflection of its long tradition.

The season’s highlights include former U.S. Poet Laureate Rita Dove’s play “The Darker Face of the Earth,” the musical “The Fantasticks” by Tom Jones and Harvey Schmidt and a new version of Shakespeare’s “Macbeth” featuring the use of interactive media.

“UGA has one of the oldest theatre programs in the country, and the tradition of live theatre is vital and thriving,” said David Saltz, head of the department of theatre and film studies in the Franklin College of Arts and Sciences.

University Theatre’s roots reach back to 1893 when UGA students formed the Thalian Dramatic Club, one of the oldest college dramatic clubs in the country. Proceeds from the shows for most of its first 20 years went to various causes, most consistently to support UGA’s Athletic Association.

In 1926, a second dramatic club, the Blackfriars, was formed at UGA; there was an immediate rivalry between the two groups. In 1931, the two clubs merged under the leadership of journalism professor Edward C. Crouse to become the Thalian-Blackfriars, the official theatrical club of UGA with its own playhouse. By 1932, the new “University Theatre” was offering its first season ticket campaign and playing to packed houses. In 1939, the department of dramatic art—today’s department of theatre and film studies—was created with Crouse as its first department head.

According to Saltz, “this year’s season embodies everything the University Theatre has stood for over the past 80 years, combining timeless classics by Shakespeare and Chekhov, long-time crowd-pleasers like “The Fantasticks,” recent plays by some of today’s greatest living writers and even a world premiere by a member of our own faculty. The seven shows are all enthralling in their own different way, and collectively offer a microcosm of theatre at the dawn of the 21st century.”

Tickets for main stage productions are $16 for the general public and $12 for UGA students. Studio Series tickets are $12 for the public and $7 for UGA students. Subscriptions, which save 25 percent off of the single ticket prices, are on sale now through the Performing Arts Center. For tickets and subscriptions, call 706/542-4400 (toll free at 888/289-8497) or see www.drama.uga.edu.

“Three Sisters” by Anton Chekhov
Cellar Theatre, Oct. 9-14 at 8 p.m.; Oct. 14 at 2:30 p.m. (Studio Series)
This haunting, delicate play-known for its tenderly constructed characters and spare, elegant language-takes the audience down a road where personal aspirations and dreams wear away under the daily grind of reality, and the fleeting optimism of youth yields to aching regret.

“The Darker Face of the Earth” by Rita Dove
Fine Arts Theatre, Nov. 1-2 and 7-10 at 8 p.m., Nov. 11 at 2:30 p.m.
This play by former Poet Laureate Rita Dove deftly combines the Greek Oedipus myth with the reality of slavery. It follows Augustus as he, like Oedipus, undertakes a journey of shocking self-discovery. The suspenseful story, Greek-style chorus, African ritual and traditional spirituals combine to create thrilling, provocative and unforgettable theatre.

“The Fantasticks” by Harvey Schmidt (music) and Tom Jones (lyrics and book)
Seney Stovall Chapel, Feb. 5-10 at 8 p.m., Feb. 10 at 2:30 p.m. (Studio Series)
The longest running musical in history, “The Fantasticks” tells a classic story in a refreshingly simple style of two teenagers in love with love who must contend with plotting parents and a melodramatic villain. The inventive, memorable score includes songs such as “Try to Remember.”

“Must Go On” by John Kundert-Gibbs
Cellar Theatre, Feb. 21-23, 27-28 and March 1-2 at 8 p.m.; March 3 at 2:30 p.m.
This new, high-energy farce features a regional TV show on the morning that everyone learns the show has been cancelled. While the cast and crew try to keep up appearances on set, everything back stage-and eventually onstage-goes horribly wrong.

“Under Construction” by Charles Mee
Cellar Theatre, March 21-23 and 26-29 at 8 p.m.; March 24 at 2:30 p.m. (Studio Series)
This play juxtaposes two utterly opposed sensibilities: the 1950s, as represented by the prolific Saturday Evening Post artist Norman Rockwell, and the present-day, as represented by installation artist Jason Rhoades. The result is a probing exploration of who we are, how we live and what we want as a nation.

“Macbeth” by William Shakespeare
Fine Arts Theatre, April 11-13 and 17-20 at 8 p.m.; April 21 at 2:30 p.m.
“Macbeth” is Shakespeare’s tightest, most relentlessly gripping play: a brilliant psychological thriller replete with witches, ghosts and apparitions. This production will draw on the resources of the UGA Interactive Performance Lab to conjure the play’s supernatural elements in an unforgettably hair-raising fashion.