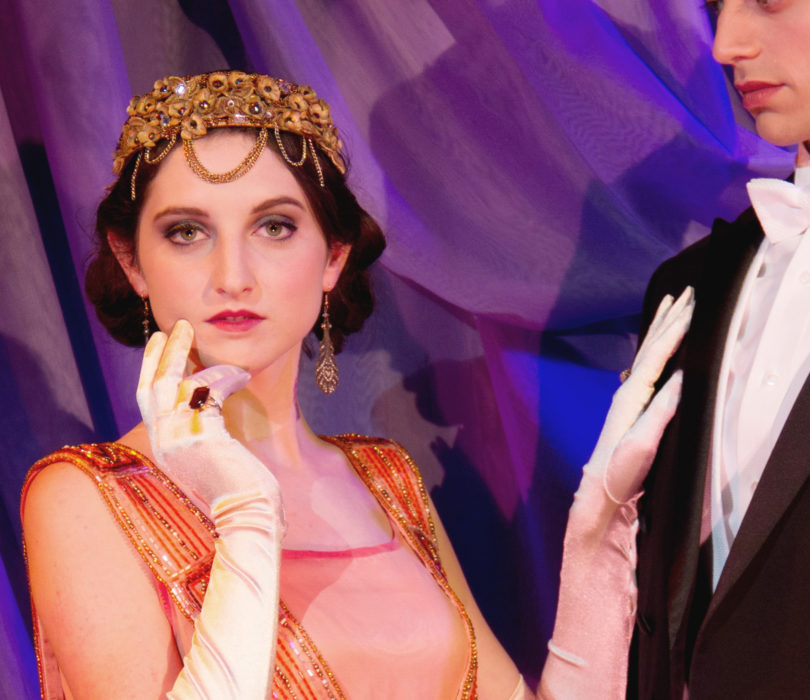 Athens, Ga. – University Theatre at the University of Georgia will present “The Great Gatsby,” adapted for the stage by Simon Levy from F. Scott Fitzgerald’s classic novel and directed by T. Anthony Marotta, on Nov. 6-8 and 12-14 at 8 p.m. with matinee performances Nov. 9 and 16 at 2:30 p.m. in the Fine Arts Theatre.

Additional events surrounding this Spotlight on the Arts feature include a small opening night reception Nov. 6, “A Party with Gatsby” Nov. 7 and a special matinee for area high school groups Nov. 11.

A self-made millionaire and the socialite he loves personify the Jazz Age in this new adaptation of Fitzgerald’s famous novel of glamour, greed and excess. Well-bred but of modest means, Nick Carraway journeys into the world of Long Island’s idle rich during the Roaring ‘20s and encounters the titular self-made millionaire Gatsby, who is yearning for Nick’s aristocratic—and already married—cousin Daisy.

“Whether through the novel, or one of four films spanning nine decades, most of us are already familiar with the story of “The Great Gatsby” and expect the characters to look and behave in certain ways,” said Marotta, an assistant professor in the department of theatre and film studies. “We expect an extravagant world containing flappers, jazz music, lavish parties, mansions, fancy yellow cars and beautiful costumes. This stage adaptation provides all of that, plus the special element of theatricality especially suited to this story of grand pretentions and expectations.”

Characters from “The Great Gatsby” are deeply ingrained in American’s imaginations, and “for some reason we love to see the story enacted again and again in different ways,” said David Saltz, head of the department of theatre and film studies. “This production carries on the tradition of last year’s very well attended production of “Pride and Prejudice,” breathing fresh new life into a beloved literary classic.”

When Fitzgerald published the novel in 1925, “it was written about and gifted to a generation that, for the first time in America’s history, was under the spell of the media,” Marotta explained. “Americans were suddenly being supplied with a stream of images depicting how the ‘haves’ look and live. We, mostly the ‘have-nots’, have been watching closely ever since.

“While the era may look different and seem far away, we have much in common with people in this play, and the expectations they project onto the American Dream.”

To make the connection between the past and the present, Marotta’s team is creating an immersive experience in which audience members will be offered the option to receive text messages that supplement the action onstage during the performance. There will be a “phone-free” area for patrons that wish to opt out of this supplementary feature of the production.

Tickets are $16 for the general public and $12 for students and can be purchased at www.drama.uga.edu/box-office, by phone at 706-542-4400 or in person at the Performing Arts Center box office or Tate Student Center ticket window.

For “A Party with Gatsby” after the first Friday performance on Nov. 7, attendees are encouraged to wear formal or cocktail attire to the show and to its after-party in the Fine Arts Building’s lobby. There will be music, hors d’oeuvres and dancing. The student jazz vocal group Classic City Jazz will be performing, and Perno’s, a sponsor of the show, is offering a special Gatsby discount for Nov. 7 for those who want to come to the event in full formal wear.

“‘A Party with Gatsby’ is actually something that goes back to pre-University Theatre tradition,” said Dina Canup, the department’s public relations and student services specialist. “The Thalian Dramatics Club—from which we came, one of the oldest collegiate dramatic clubs in the country, founded in 1893—used to do nights like this often for their shows in their first 20-30 years, when people would come in formal wear to the show at the New Opera House and stay for a fancy dress ball afterward.

“This was also during the time when proceeds from the shows went primarily to help fund the Athletic Association, which was in great financial need.”

Spotlight on the Arts
Presented by the UGA Arts Council—of which the department of theatre and film studies is a participating unit—the third annual Spotlight on the Arts features more than 60 events in the visual, literary and performing arts. The nine-day festival, scheduled for Nov. 6-14, includes museum tours, discussions with writers and concerts. For the complete schedule, see www.arts.uga.edu. Follow the Arts at UGA on Facebook at www.facebook.com/UGAarts or Twitter at https://twitter.com/UGA_Arts.