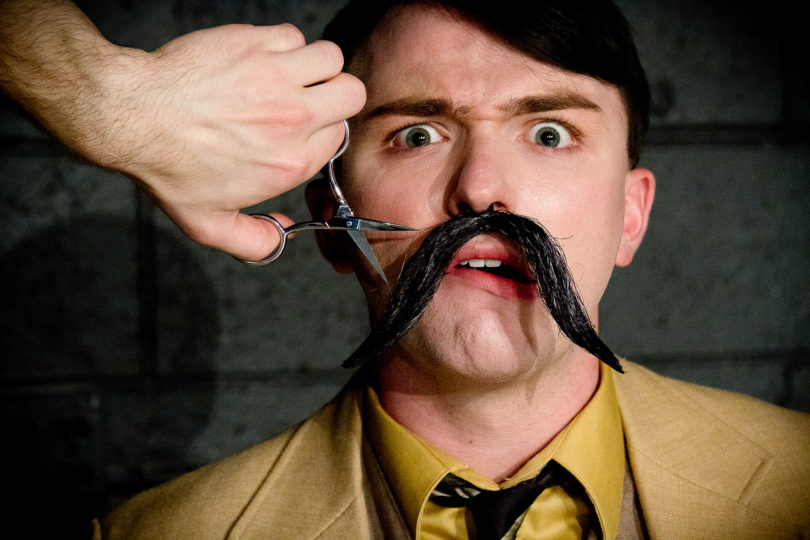 Athens, Ga. – University Theatre at the University of Georgia will present the bold farce “Mein Kampf,” written by George Tabori, the son of a holocaust survivor, on Feb. 19-21 and 24-28 at 8 p.m. with a matinee performance March 1 at 2:30 p.m. in the Fine Arts Building’s Cellar Theatre.

In conjunction with this production, the UGA departments of theatre and film studies and German and Slavic studies are hosting an international symposium on “George Tabori and the Theatre of the Holocaust” Feb. 26-28. Scholars and performers from around the world will gather in Athens for this interdisciplinary event, which is free and open to the public. For more information and to view a schedule of speakers and performances, see www.drama.uga.edu/event/tabori.

Directed by UGA alumnus Del Hamilton, co-founder of 7 Stages Theatre Company in Atlanta, the “Mein Kampf” production will move to Atlanta for a run March 12-14 at 8 p.m. and March 15 at 5 p.m. at 7 Stages.

“Mein Kampf” portrays Adolf Hitler as a young, struggling artist secretly yearning to take over the world and whose life is changed by a chance encounter with a Jewish Bible seller. This story is inspired by actual events, as Hamilton notes.

“Our play,” he said, “invites you to an actual time in Hitler’s life when he first moved from his country bumpkin roots to the city of Vienna to try his hand at painting landscapes, his first love. In fact, he did live in a hovel, and there were Jews everywhere in the ghetto where he lived.”

Tabori takes as his target the most notable villain in history: Hitler. Born in Budapest, Hungary, in 1914 to a secular Jewish family, Tabori was working as a war correspondent overseas when his parents were put into a concentration camp. Only his mother escaped.

Tabori took a professional as well as personal risk in depicting Hitler, according to Hamilton.

“In 1987, when Tabori first presented this play, German-speaking countries could still not permit imitations, caricatures or even realistic impressions of Adolf Hitler,” he said. “Like life, often at moments just before big change occurs, theatre demands to make us uncomfortable.”

The production, like Tabori’s script, draws on Bertolt Brecht’s distancing techniques to encourage audiences to take a step back from the characters and action to think about what is occurring on the stage. This includes the many jokes and dark humor of the play as well as breaks from reality into a more exaggerated tone of an ominous dream.

“George Tabori, who would have been 100 years old this year, is widely regarded in Germany as one of the greatest playwrights of the 20th century, and ‘Mein Kampf’ is his signature piece,” said David Saltz, head of the department of theatre and film studies. “Though he lived in the United States for several years and wrote screenplays for directors like Alfred Hitchcock, he’s still largely unknown here. We hope our production of this funny, shocking and brilliant play will help change that.”

Tickets are $16 for the general public and $12 for students and may be purchased online at www.drama.uga.edu/box-office, by phone at 706-542-4400 or in person at the Performing Arts Center box office or the Tate Student Center ticket window.