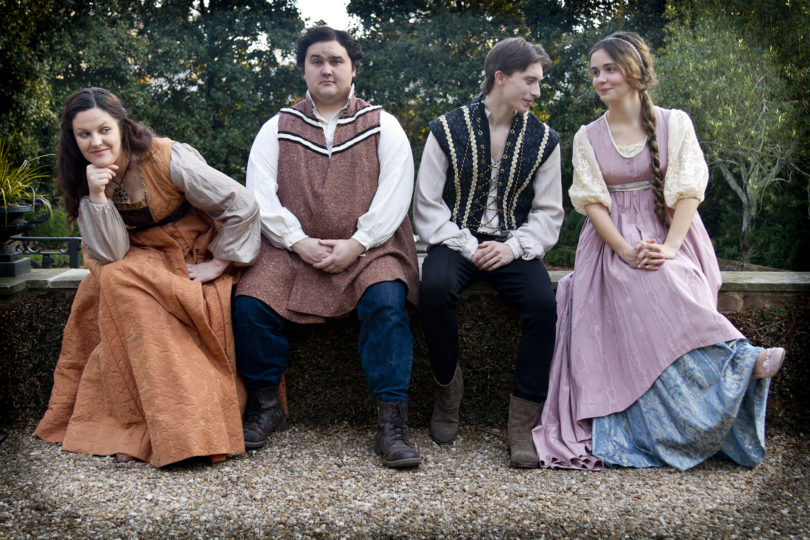 From left to right are Stephanie Murphy as Beatrice

Athens, Ga. – University Theatre at the University of Georgia will present William Shakespeare’s romantic comedy “Much Ado About Nothing.” Directed by Kristin Kundert-Gibbs and featuring original live music, performances will be April 9-11 and 15-18 at 8 p.m. and April 19 at 2:30 p.m. in the Fine Arts Theatre.

A special matinee for area schools will be held April 14 at 10 a.m.

“Much Ado About Nothing” contains eight musical numbers, four originally included in the text and four added, which will be rendered by a live band in this production. Inspired by a recent popular Mumford and Sons song referencing a key line from the play, this production uses contemporary music performed onstage.

“The music feels like the play to me—it mixes sadness and joy; it is as rough-hewn as the planks of Shakespeare’s Globe Theatre; it speaks to all generations,” said Kundert-Gibbs, an associate professor of acting in the UGA department of theatre and film studies.

“Much Ado About Nothing” is one of Shakespeare’s most popular comedies. It focuses on the romantic hijinks and misunderstandings that ensue when soldiers return from war. The women are charmed by men in uniform-with the exception of the charmingly disdainful Beatrice, played by Master of Fine Arts acting student Stephanie Murphy, who professes to be immune to their charms. Beatrice’s cousin Hero, theatre major Rebeca Ispas, and soldier Claudio, theatre major Brad Burnham, fall in love with each other while Beatrice and soldier Benedick, Master of Fine Arts acting student Zack Byrd, trade witty insults and express cynical views of marriage that seem remarkably modern. Hero and Claudio wonder: Can they trick the two cynics into a romance of their own?

Shakespeare never wrote a musical, but his plays—especially the comedies—often contain songs.

“His plays are filled with musical numbers and discussions about the beauty and ability of music to move the soul,” Kundert-Gibbs said.

The set, designed by Julie Ray, an assistant professor of scenic design, created a romantic outdoor garden space” based on the Taormina gardens in Sicily. Ray’s hope is that “it will transport you to another time and place where young love blossoms,” she said.

Like the play itself, the fabrics and silhouettes of the costumes, designed by Matt Mallard, Master of Fine Arts costume design student, are light and airy. In an attempt to echo the vibe of the contemporary music within the show, some modern influences are brought into the design and the characterizations.

The production’s dramaturg, Fran Teague, the University Professor of Theatre and English, edited the text to emphasize “a world in which women hold power,” she said. “But we retained as much of Shakespeare’s language as we could, so you can hear those women both exercise power and make mistakes, just as Shakespeare’s male characters did.”

Tickets are $16 for the general public and $12 for students and can be purchased online at http://drama.uga.edu/box-office, by phone at 706-542-4400 or in-person at the Performing Arts Center or Tate Student Center box offices.