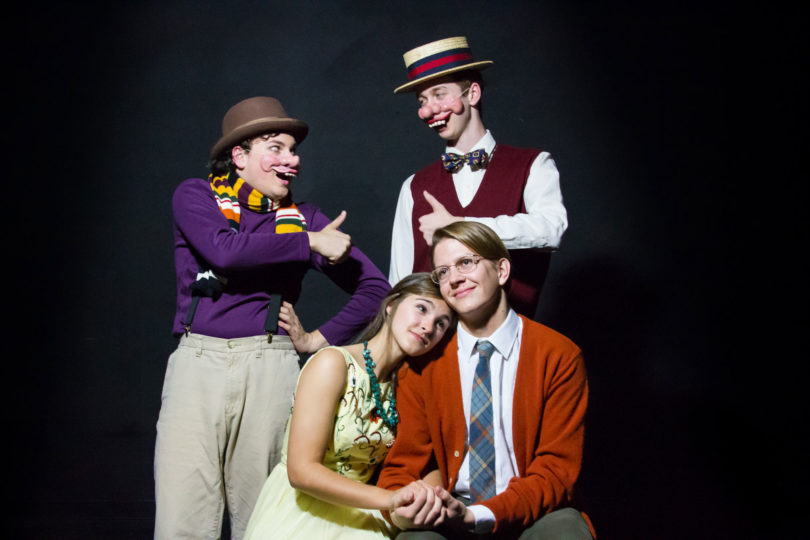 Athens, Ga. – The University Theatre will celebrate its 80th season at the University of Georgia with performances of the musical “The Fantasticks” in the Seney-Stovall Chapel Feb. 5-10 at 8 p.m. with an added matinee performance Feb. 10 at 2:30 p.m.

A lighthearted, modern twist on “Romeo and Juliet” featuring musical numbers such as “Try to Remember” and “Soon It’s Gonna Rain,” “The Fantasticks” features neighboring fathers in a feud over a shared wall, their love-struck offspring and a hired villain with his troupe of traveling actors. The young lovers face the conflict between moonlight fantasy and the reality of harsh sunlight as the question of “who gets the girl” is not quickly answered.

With music by Harvey Schmidt and lyrics by Tom Jones, “The Fantasticks” opened off Broadway in 1960 and went on to become the longest-running musical in history, playing continuously for more than four decades. Directed by UGA professor Farley Richmond, the University Theatre production features musical direction by Rachel Townes.

“Much of ‘The Fantasticks’ distinctive charm derives from its minimalistic style, which stands in contrast to the theatrical extravagance of most musical blockbusters,” Richmond said. “The stage is virtually bare, with audiences’ imaginations filling in most of the details.”

The primary scenic element is a wall created by a character, performed by undergraduate theatre major Connor Brockmeier, called simply the “Mute.”

“The musical’s stripped-down style makes it ideal for the University Theatre’s Studio Series, which is dedicated to highlighting the actors’ skill, humanity and intimate connection with the audience,” said David Saltz, head of the department of theatre and film studies.

Tickets for “The Fantasticks” are $12 for the general public and $7 for students. They can be purchased at http://www.drama.uga.edu/box-office, by phone at 706/542-4400, in person at the Performing Arts Center box office or at the door before the show.

The production is sponsored by Brian P. Hall General Dentistry. For more information on the UGA department of theatre and film studies, see drama.uga.edu.