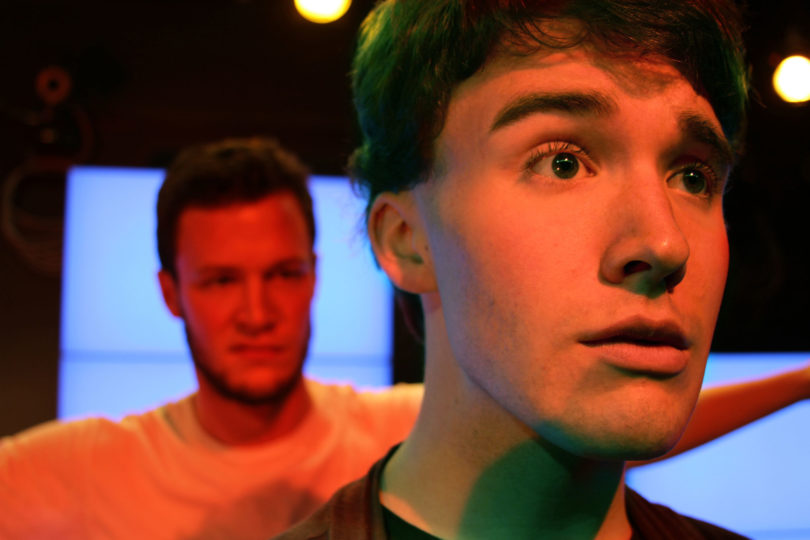 University Theatre will present Dark Ride by Len Jenkins in the Cellar Theatre of the Fine Arts Building from March 27-April 1 at 8 p.m. with a 2:30 p.m. matinee on April 1.

Tickets $7 for UGA students and $10 for everyone else.

Dark Ride is a series of absurdist vignettes loosely tied to a quest for the famous Hope Diamond and the losses of family and fortune that befall all those who hold the cursed diamond in their possession.

The title of the play refers to the golden age of Amusement Park funhouses known as “Dark Rides” and alludes metaphorically to the various unnerving and constantly surprising journeys each of the eclectic assortment of characters undertake, which ultimately lead them all to the same unexpected destination.

The play is produced under the auspices of the department’s Interactive Performance Laboratory and incorporates interactive video displayed on a 12-panel video wall.

“The play is tightly written and densely packed with pretty astounding metaphor and offers many opportunities for displays of artistic virtuosity on and off-stage,” said Scott Higgs, dramatic media MFA candidate and the show’s director.

Many critics regard Dark Ride, originally produced in 1981, as a milestone of postmodern theater.

University Theatre’s production of Dark Ride is part of the Studio Series, which consists of four plays presented in an intimate and stripped-down format. Dark Ride is the final Studio Series show of the 2011-2012 season.

Tickets can be purchased through drama.uga.edu/events/boxoffice, by phone at 706-542-4400, in person at the Performing Arts Center box office or at the door before the show.