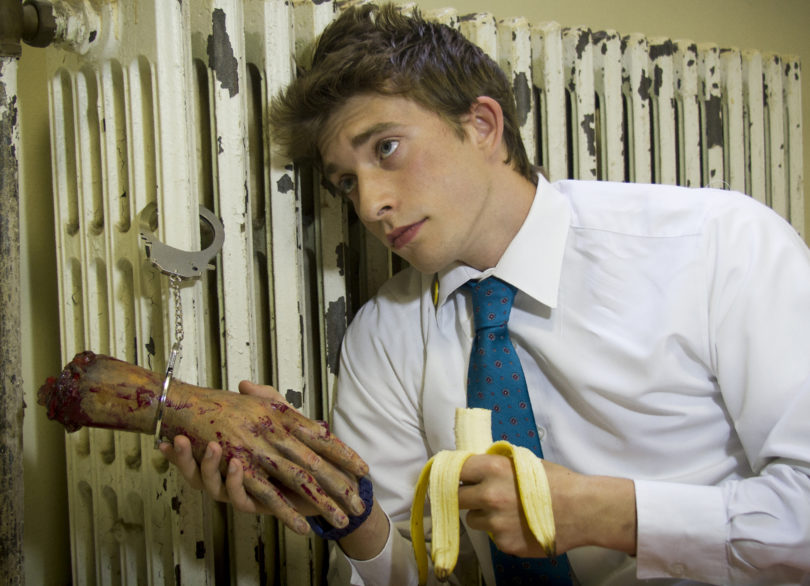 University Theatre will present A Behanding in Spokane by acclaimed Irish playwright Martin McDonagh. Directed by Kristin Kundert, the play will be performed in the Cellar Theatre Sept. 24-25, 29-30 and Oct. 1-2 at 8 p.m. with 2:30 p.m. matinees Sept. 27 and Oct. 4. Tickets are $16, $12 for students, and can be purchased at drama.uga.edu/box-office, by phone at 706-542-4400 or in person at the Performing Arts Center or the Tate Student Center box office.

This dark comedy tells the story of a man named Carmichael searching for his missing left hand for nearly 30 years. When he chances upon two inept con artists with a hand to sell, it sets off a macabre farce.

A Behanding in Spokane is the most recent stage success from McDonagh, an award-winning playwright and filmmaker. While he has enjoyed immense success on the stage (The Beauty Queen of Leenane, The Pillowman, The Cripple of Inishmaan) McDonagh recently has been concentrating more on film (In Bruges, Seven Psychopaths).

McDonagh is noted for his dark, complex and sometimes strange plots, according to Kundert.

“McDonagh has created a sort of Alice in Wonderland world where nothing is logical and yet makes complete sense,” said Kundert, an associate professor in Franklin College’s theatre and film studies department. “He is unafraid to examine the sinister nature of humans.

“I find this play hysterical,” Kundert also said. “Once at rehearsal, I literally fell out of my chair laughing. The humor is dark, politically incorrect and provocative. I suspect audiences will howl all the while thinking, ‘I shouldn’t be laughing at this.’ “

The play contains explicit language that is not suitable for all ages.