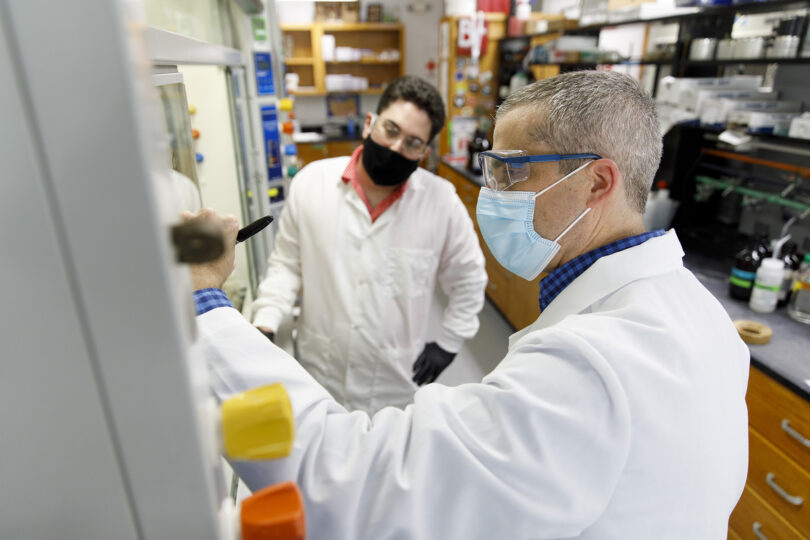 From left, doctoral student Jacob Garber talks with associate professor Eric Ferreira as he writes formulas on the glass as they talk about Garber’s work at a vent hood in their lab inside the Chemistry Building. (Andrew Davis Tucker/UGA)

Eric Ferreira’s own early fascination with solving puzzles helps him inspire students to piece together the logic behind organic chemistry.

“I was always interested in logic puzzles and things of that nature that as a kid,” said Ferreira, an associate professor in the Franklin College of Arts and Sciences’ chemistry department. “As a sophomore in college, my first semester organic chemistry professor really illustrated the logic behind it, and it made perfect sense to me.”

As Ferreira’s undergraduate research position brought him into the lab, his career trajectory took shape around his knack for spatial reasoning as a route to problem-solving. 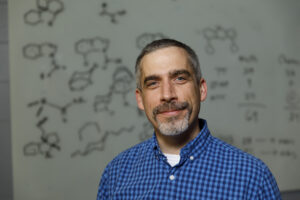 “Organic chemistry relies heavily on spatial reasoning, logic, and some have even compared it to learning a foreign language,” he said, noting that the cumulative nature and nomenclature of the science really does suggest an analogy to foreign language fluency.

Ferreira has frequently taught graduate and advanced level undergraduate courses, and in spring 2021, he is teaching the honors and majors section of second semester organic chemistry.

The often pressure-packed sequence of courses, with implications for professional schools and entrance exams, can occupy an outsized role in students’ perception and performance. Here he sees the foundational aspect of the science firsthand. Ferreira says the daunting reputation of organic chemistry at UGA is not at all unusual, but it’s also a mark of how vitally the subject relates to so many fields and disciplines.

“It has a tough reputation, but if they can have an open mind, there’s some really cool stuff students learn about how chemistry and organic chemistry touch everything and why it’s important to learn to go on to a career in medicine, to be able understand its broad relevancy and connections,” he said.

Those underlying logical principles also play a leading role in solving problems in Ferreira’s research lab, where his team designs methods for making new chemical bonds to construct molecules of biological interest, such as pharmaceuticals. “We really try to think about, on the fundamental level, how to make those molecules step by step. The nature of those steps, how we design new transformations, might enable us to make these molecules more efficiently, more selectively, and with higher yields.”

His lab has already synthesized a few natural products, existing compounds from marine or plant sources with interesting molecular structures. These present possibilities for understanding how those types of molecules might be able to engage enzymes in the body and induce a desired biological response.

“The rich diversity that you can get from plant sources in terms of molecular structure is a lot more than what you can just easily synthesize from scratch,” he said. “Recognizing those architectures, understanding how they can induce a physiological response, thinking about how they are synthesized biologically, and how we might be able to synthesize them in the lab, help us to best use the tools that we have or inspire us to invent new ones.”

Another focus of their work is in catalytic alkyne activations, designing transformations that use the notion that a metal will associate with the alkyne, initiate reactivity, and ultimately react with other functionalities in the molecule. The lab has developed new ways to make carbon-carbon bonds that build up complex architectures in molecules very efficiently, transformations they can study as key steps toward natural products synthesis.

“We use the principles of arrow-pushing mechanisms, a simple representation of the flow of electrons, which is the foundation of carbon-carbon bond formation. We teach arrow-pushing in chapter five in organic chemistry, and it’s threaded through the entire rest of the organic chemistry sequence,” he said, connecting his work in the lab back to the classroom.

“In our own research, it really is our ability to understand electron flow, and how we can exploit that in new bond constructions, that enables building these molecules that could have promising bioactivities,” he added.

Ferreira’s aptitude for puzzles is also at work on the Building Steering Committee for the ISTEM Research Building, which will house faculty researchers and students from chemistry and engineering when it opens in fall 2021.

“There’s has been a lot of thought for how we want this building to be shaped and organized, and one of the really nice things about it is it’s going to blend chemistry and engineering together, to be more dynamic for people to talk to each other and hopefully spur new collaborations,” he said.