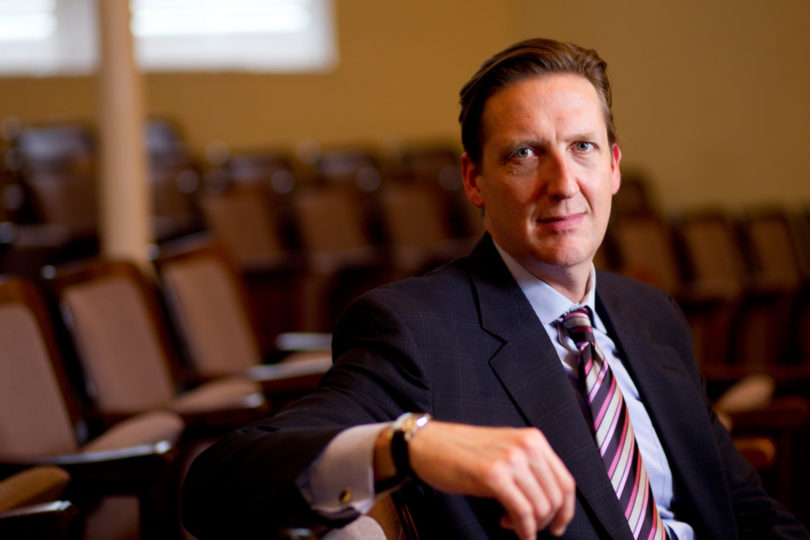 Athens, Ga. – WUGA-TV, the public television station for the University of Georgia, has launched a new local 30-minute interview show, which features unscripted and unrehearsed conversations with distinguished guests visiting the UGA campus.

The upcoming episode of Unscripted with Alan Flurry will air Oct. 25 at 7:30 p.m. with former U.S. Congressman Bob Barr as the guest. Barr represented the 7th district of Georgia from 1995-2003 and occupied the 21st Century Liberties Chair for Freedom and Privacy at the American Conservative Union until 2008, when he became the Libertarian Party nominee for president. The interview was recorded in the Morton Theatre in downtown Athens.

The show’s host is Alan Flurry, a writer in the UGA Franklin College of Arts and Sciences. Filmed at various locations on the UGA campus and in Athens, the show features dignitaries, lecturers, artists, scholars and newsmakers. In the course of conversational dialogue with Flurry, guests share their expertise and experience, as well as their opinions and insights on topics of interest in the world today.

A UGA alumnus (A.B., political science, ’94) and a long-time resident of the Athens area, Flurry said of his show, “We have so many great people coming to campus on a constant basis-artists, writers, scientists and scholars of every stripe. The show is a rare opportunity to go further into conversation, engage with these highly accomplished visitors, and share some of their expertise and experience with a wider audience.”

Sterlin Harjo, filmmaker
Harjo is a member of the Creek and Seminole nations. In 2004, he received an Annenberg Fellowship. His film Barking Water premiered at the 2009 Sundance Film Festival and has been featured at the Museum of Modern Art in New York City.

Nicola López, artist
Born in Santa Fe, N.M., López currently lives and works in Brooklyn, N.Y. Through her work in printmaking, drawing and installation, she describes and reconfigures contemporary landscape. Her interests stem from traveling, studying and working in other countries, including Mexico, Peru and Morocco.

Anne Waldman, poet
Waldman is a writer, performer, professor, scholar and cultural/political activist. In 1974, along with Allen Ginsburg and others, she founded the Jack Kerouac School of Disembodied Poetics at the Naropa Institute in Boulder, Colo.

Peter Wood, Duke University history professor
Wood is the author of Near Andersonville, Winslow Homer’s Civil War, which examines the interplay of symbolic elements in one of the earliest and least known paintings by the American master. His narrative locates the painting in southwest Georgia in 1864 and provides its political and military context.

Brian Reddy, stage and screen veteran
Reddy has appeared in dozens of television programs, including The X-Files, Seinfeld and Law & Order and films including O Brother, Where Art Thou? Casino, The Birdcage and Dante’s Peak. He has appeared on Broadway in Abe Lincoln in Illinois, The Crucible, M. Butterfly and Death Defying Acts.

Cynthia Tucker, Pulitzer Prize winner and UGA visiting professor
Tucker was the editorial page editor for the Atlanta Journal-Constitution from 1990-2009 and later served as the paper’s political columnist in Washington, D.C. In 2006, the National Association of Black Journalists named her Journalist of the Year. Currently, she is a visiting professor of journalism and the Charlayne Hunter-Gault Distinguished Writer-in-Residence in the UGA Grady College of Journalism and Mass Communication.

Paul Tough, educator and national children’s success advocate
Tough is the author of Whatever It Takes: Geoffrey Canada’s Quest to Change Harlem and America and How Children Succeed: Grit, Curiosity, and the Hidden Power of Character.

Francis Slakey, physics professor
Slakey is co-director of the Program on Science in the Public Interest at Georgetown University and associate director for public affairs for the American Physical Society. His 2012 memoir To The Last Breath documents his quest to scale the highest peak on every continent and surf every ocean.

Paddy Johnson, writer and critic
Johnson is the founding editor of New York-based art blog Art Fag City. She has been published widely, including in New York Magazine, Art in America, The Huffington Post and The Guardian. She lectures at Yale University, Parsons, Rutgers and South by Southwest.

Flurry’s show joins a line-up of programming on the public television station, which is in partnership with Georgia Public Broadcasting. The station’s format includes PBS classic programming, selection through an affiliation with the World Network, and other UGA and community-focused shows and news broadcasts. WUGA-TV recently increased its coverage in Northeast Georgia and throughout the greater Atlanta television market when it entered agreements with DirectTV, Dish Network, AT&T U-Verse and Comcast cable for either new or expanded carriage. The station can be viewed on the satellite services and AT&T U-Verse on Channel 32, its over-the-air channel in the Athens, Gainesville and surrounding counties, on Comcast cable channel 96 in Barrow County and in portions of Jackson, Hall and north Gwinnett counties.

Funding for WUGA-TV and its affiliated radio station WUGA-FM is provided in part through sponsorships, underwriting and listener contributions. For more information on WUGA-TV, see http://www.wugatv.org/.