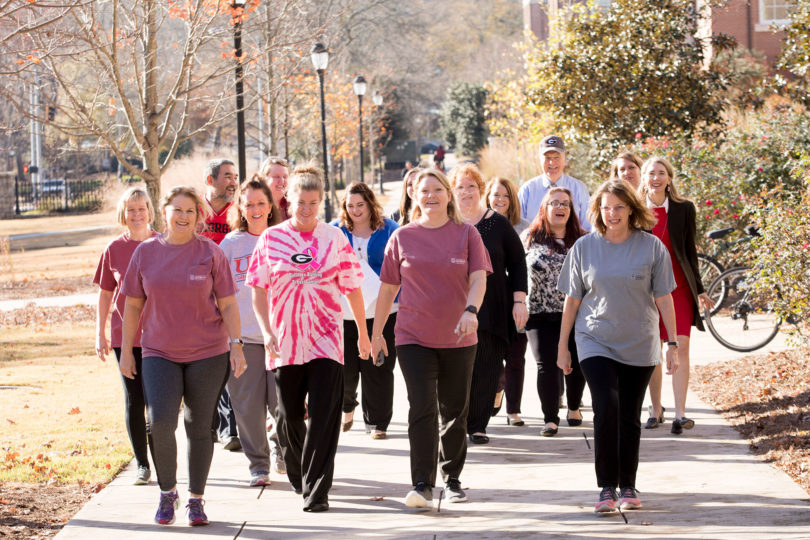 College of Pharmacy faculty and staff have taken an active role in HealthTrails, the University System of Georgia’s well-being program instituted system-wide in early 2017. Participants in the program have seen health improvements and better working dynamics within the organization. (Photo by Dorothy Kozlowski)

When most people take on a new wellness program, their expected outcomes are weight loss, increased energy, an improved physique and other health benefits.

At the University of Georgia College of Pharmacy, however, a well-being initiative implemented last year has become much more than a change on the scales, a more encouraging trip to the doctor’s office or a smaller clothing size. It has enhanced the working dynamics within the organization.

The College of Pharmacy has taken an active role in HealthTrails, the University System of Georgia’s well-being program that was instituted system-wide in early 2017. With a goal of fostering a culture of well-being and healthy environments, HealthTrails empowers participants to track mindful habits, such as steps walked, water consumed and acts of kindness delivered, which are tallied into virtual daily miles, and allows participating individuals and teams to compete between other departments, colleges and universities in the USG system.

In the first HealthTrails campaign, which spanned from late winter 2017 through the spring, nine staffers from the College of Pharmacy, along with Dean Svein Øie, comprised the PharmDawg Sole Train team, which placed fourth among the 71 UGA teams and 55th overall in the USG competition, which had 680 teams.

The PharmDawg team signed up for the summer campaign and came in third among 19 teams at UGA and fifth among 162 in the USG competition. Gaining popularity within the college, the HealthTrails fall program had three participating PharmDawg teams, comprised of an almost equal number of faculty and staff. The three teams placed second, third and fourth out of 43 teams at UGA and ninth, 13th and 22nd among 407 teams in the USG.

Incredible success stories of improvements in health among the pharmacy college participants have been reported. A diabetic employee’s sugar levels are down, several employees have lost weight. Overall, participants have noticed a positive shift in their energy levels.

The greatest benefits of the HealthTrails campaigns, however, have been the camaraderie and spirit of unity that have occurred across boundaries in the College of Pharmacy. During the fall HealthTrails program, each team was comprised of four staff and five faculty members. They interacted in a variety of activities, including walking and exercising together, sharing stories of successes and frustrations and participating in outside road races, as well as other physical undertakings that wouldn’t have happened otherwise. For instance, Michael Fulford, the college’s director of assessment who also happens to be the advisor to the UGA Ballroom Dancers, taught an after-work Salsa-Samba class. Kay Brooks, a faculty member in the college’s Experience Learning program and a local fitness instructor, taught an exercise and circuit training class for PharmDawg HealthTrails participants.

Øie is enthusiastic about the long-term benefits of HealthTrails for the organization as well.

“Overall, this was a great model for how faculty and staff can and should work together for a common goal,” said Øie. “We have seen boundaries diminish and cohesiveness occur as a result of this program. This has spilled over into the workplace and benefitted our college and the students we serve. I truly believe this program has made an impact on our culture.”

The dean leads by example. His individual HealthTrails feat set the bar for excellence and success. In both the summer and fall HealthTrail campaigns, this long-serving UGA dean came in first place at UGA and placed in the top 10 in the USG system.

“Dean Øie is an inspiration to the entire College of Pharmacy, not just while we’re doing HealthTrails but in all daily interactions within our organization,” said Toni Phelabaum, administrative assistant in the dean’s office and the overall captain for the college’s HealthTrails efforts. “He continually demonstrates his dedication not only to his own health and wellness but to the well-being of his faculty and staff. He truly exemplifies what it means to be a leader.”

“It was a great program, and the best part was the friendly competition that helped encourage and motivate us to exercise more often on our own as well as with other members of the pharmacy family,” said Jayani Jayawardhana, an associate professor in the college, who participated in the fall HealthTrails campaign.

For more information about upcoming HealthTrails activities, contact the USG Office of Well-Being at usg.edu/well-being/.