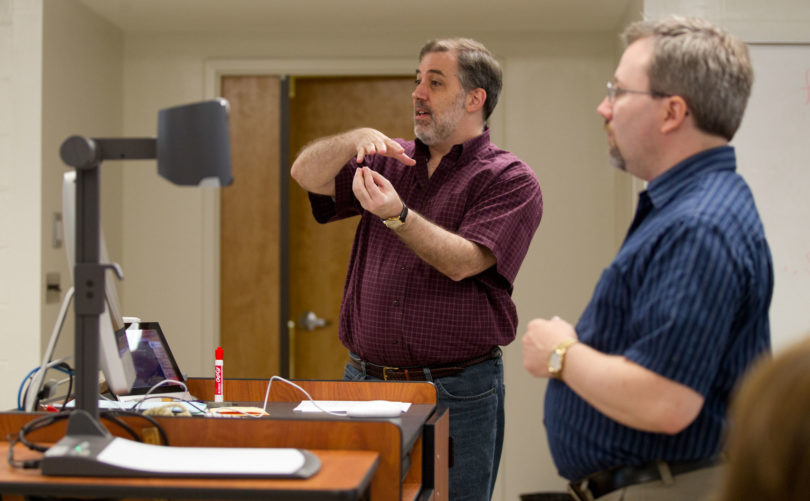 Two physics professors have taken Isaac Newton’s first law of motion—an object at rest will continue to be at rest unless acted upon by an external force—and applied it to the way they teach the subject.

For decades there was inertia on how physics classes were taught to undergraduates: A lecturer would talk to students about physics without the opportunity for them to actively engage in the concepts.

Assistant professor Craig Wiegert and associate professor Steven Lewis, faculty members in the Franklin College of Arts and Sciences, are trying to be that external force to provide some movement in how introductory physics courses can be taught at UGA.

Funded in part by a 2012 Summer Innovative Instruction grant from the Office of the Vice President for Instruction, the course they developed and jointly are teaching this fall aims to bring a hands-on, small class approach to a larger-sized class of about 50 engineering majors. The idea is to present the cerebral concepts of physics to students through group activity and instructor engagement.

“Having students engaged in activities that are designed to strengthen their learning allows them to ask questions and explore new ways of thinking about the various concepts that they have learned,” Lewis said.

To do this, Wiegert and Lewis are teaching this fall through a class model called SCALE-UP. Developed at North Carolina State University for large physics classes, SCALE-UP stands for Student-Centered Active Learning Environment for Undergraduate Programs.

The SCALE-UP model focuses heavily on group-work class participation and technology that makes student-to-student and student-to-teacher interaction easier in a larger class setting.

In a SCALE-UP model, the physical layout of the class—where students sit, where the instructor stands and where attention is focused—matters.

The room in the physics building that was renovated for SCALE-UP classes has eight large round tables, each with nine chairs for students and three Apple computers. The setup allows students to work in groups of three for class activities.

The instructor station that operates the projector is in the center of the classroom.

“If you place the instructor in the middle of the classroom and away from the (white) board, then you create the physical environment where the instructor has a disincentive to go to the board and lecture to students,” Wiegert said.

SCALE-UP classes draw from the inverted classroom model in which students are introduced to material outside the class—whether through assigned reading or watching a video—and concepts are reinforced or misconceptions are corrected in the class.

At the beginning of each session, Lewis and Wiegert present a physics problem to students such as: “Suppose you throw a ball straight up in the air. Assume air resistance is negligible. When is the ball in free fall?”

Students first answer the questions individually, registering their choices through electronic clickers. Before the instructors provide the correct answer, students break into their groups of three to discuss their answers and then a class-wide discussion ensues.

Holden Copeland, a sophomore civil engineering major from Macon, said the interaction between instructor and students is particularly helpful.

“Physics is a hard class already,” he said. “This makes it a little easier.”

Francis Chiefe, a sophomore biological engineering major from Suwanee, said, “The whole point of the interactivity is to let us make mistakes while we’re in class and not make the mistakes on the test.”

While SCALE-UP was designed with physics in mind, there is interest in using SCALE-UP classes beyond just the scope of physics.

Wiegert hopes the proposal for a new Science Learning Center, which would house additional class and student lab space, will allow for more SCALE-UP classes available for other science and math courses.

“I know there is a lot of interest in other departments in getting this SCALE-UP classroom model,” Wiegert said. “Having the space for these new teaching environments is important.”

The hope of Wiegert and Lewis is that by teaching this course with successful outcomes for students, they will have made the proverbial ball roll toward better opportunities for creating these active learning environments.