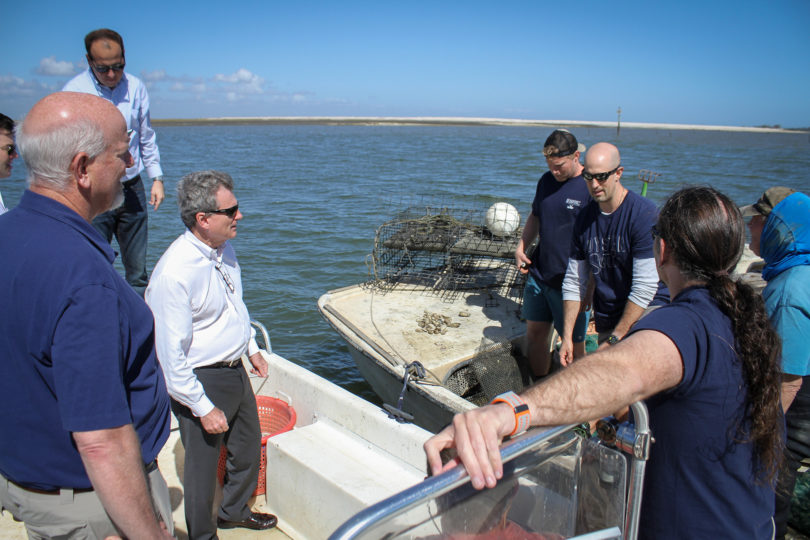 Skidaway Island, Ga. – Congressman Buddy Carter toured the oyster hatchery at the University of Georgia Marine Extension and Georgia Sea Grant and met with a shellfish grower who is working with UGA to grow single oysters in an effort to diversify the coastal economy.

Carter, along with Jared Downs, a member of U.S. Sen. Johnny Isakson’s staff, spent Feb. 24 at the hatchery on Skidaway Island, learning about UGA’s effort to revive the oyster industry in Georgia.

“The oyster industry has great potential to bring strong economic benefits to our area,” Carter said, following the visit. “The UGA oyster hatchery is leading this effort and working to strengthen Georgia’s shellfish industry.”

Carter and Downs met with Mark Risse, director of Marine Extension and Georgia Sea Grant, Tom Bliss, director of the Shellfish Research Lab, as well as extension agents at the hatchery, to learn about their efforts to produce spat, or baby oysters, and grow them into single oysters for the half-shell market.

Since its launch in 2015, the hatchery has produced 700,000 spat, which have been given to 10 shellfish farmers on the coast who grow the oysters on sites they lease from the state Department of Natural Resources. The potential harvest value of the oysters is $140,000 to $245,000. By 2018, the hatchery is expected to produce between 5 million and 7 million spat per year, with an annual estimated harvest value between $1 million and $2 million. The goal is to attract a commercial hatchery and businesses related to oyster production to the area, which would provide jobs and greater economic development opportunities on the coast.

During his visit, Carter traveled by boat to see the oysters in Wassaw Sound farmed by John Pelli, owner of Savannah Clam Company, and sample the raw oysters. In addition to hearing about the economic benefit of oyster production, Carter also learned that oyster production improves water quality. A single adult oyster can filter up to 50 gallons of water per day, a benefit to everyone, not just those involved in the seafood industry.

“I am glad to have had the opportunity to see the great work going on at the hatchery and I look forward to seeing the oyster harvesting business grow in our community and state,” Carter said.