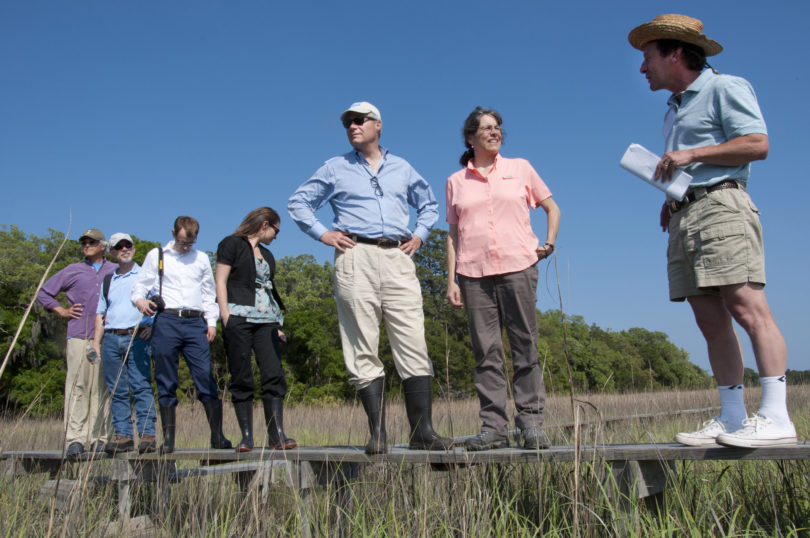 “Sapelo Island embodies the beauty of Georgia’s ecology and the richness of its history,” said Whitehouse, a member of the Senate Environment and Public Works Committee and chairman of the Subcommittee on Clean Air and Nuclear Safety. “It’s fitting that research to help us understand the dangers of climate change and protect America’s coastal communities is going on right here at UGA’s Marine Institute on Sapelo Island. I’m grateful for the chance to learn about this important work.”

The tour particularly focused on the dangers posed by rising sea levels and the increasing vulnerability of coastal communities to flooding and storm damage. Recent literature suggests that the South is prone to more weather and climate-related disasters by a ratio of almost four to one.

“Our coast is different than the Northeast in that we have more extensive salt marshes and more tidal freshwater habitat, but we don’t have many big cities,” said Merryl Alber, professor of marine sciences in UGA’s Franklin College of Arts and Sciences and director of the Marine Institute. “All of our coastal communities have infrastructure in flood zones, but here in coastal Georgia, there are less people to foot the bill for adaptation.”

For 60 years, the UGA Marine Institute on Sapelo Island has been the premier destination for scientific research on salt marshes and estuaries. Home to the Georgia Coastal Ecosystems Long Term Ecological Research Project, the Institute’s pristine barrier island setting is an ideal site for coastal research, such as new efforts to better understand the role that salt marshes play in absorbing carbon.

The day also provided an opportunity for visitors to tour the Marine Institute and to hear about the various universities and other groups that regularly use the facility. The group ate local Georgia shrimp and met with the senator in a former powerhouse that has now been repurposed as a classroom and meeting venue.

“This was a wonderful opportunity to showcase the important research being done on Georgia’s coast,” said David Lee, UGA vice president for research. “As a land and sea grant university, we have an obligation to make sure we are good stewards of our environment and to study carefully the effects of human behaviors on the natural world, so it was really rewarding for me to have Sen. Whitehouse and our other guests see the good work being done here.”

Sen. Whitehouse, whose tour has already made stops in North Carolina and South Carolina, will conclude his road trip in Miami on April 25, where he will attend a rally to raise awareness about climate change and promote responsible solutions to the problem.