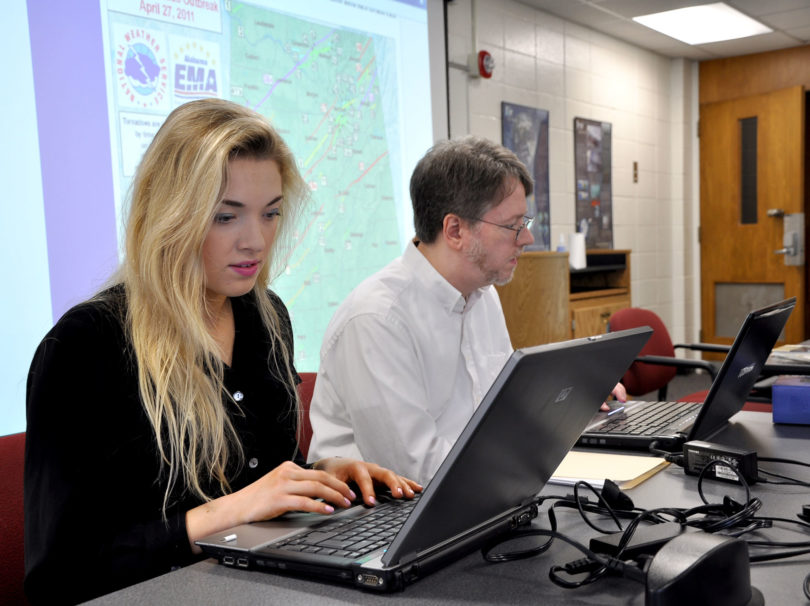 Athens, Ga. – After tornadoes touched down in the Southeast on April 27, 2011, many people in the storm’s path did the most logical thing they could—they posted images of the aftermath on Facebook.

The University of Georgia’s John Knox and his student researchers went one step further. They used the social media site to create and analyze a database of the debris, turning photos and comments into the most comprehensive study, to date, of debris trajectories from a tornado outbreak.

The project started when Alabama resident Patty Bullion compiled a Facebook page on “Pictures and Documents found after the April 27, 2011 Tornadoes.” Using the images and information there as a starting point, the UGA team compiled a scientific database and used geographic information system mapping software and high-resolution numerical trajectory modeling techniques to pinpoint the takeoff and landing points of 934 found-and-returned objects.

“Even 10 years ago, the items of debris left behind by a tornado outbreak—in our study, everything from metal signs to quilts and photographs—probably would have been thrown away, and that would have been the end of it,” said Knox, an associate professor in the Franklin College of Arts and Sciences department of geography and a faculty member in the atmospheric sciences program.

“But with the wide reach of Facebook, Patty Bullion was able to reunite owners with items they lost from their homes, especially family pictures that traveled hundreds of miles in some cases. And we, in turn, were able to use the information Patty gathered to analyze that information scientifically. Our study highlights the still mostly untapped potential of social media databases in scientific research.”

The research team determined that objects traveled nearly 220 miles (353 kilometers), exceeding the previous record for the longest documented trajectory of debris from a tornado.

The study recently was published online by the Bulletin of the American Meteorological Society.

“It’s great to have the opportunity to participate in research like this as an undergrad, especially when the study has real-world applications,” said Rackley, a UGA senior in geography and atmospheric sciences from Forsyth who is second author on the study. “Having research experiences now will certainly give me a head start when I begin graduate school in the fall.”

The researchers established, in a finding not previously documented, that the farthest-traveling debris objects took a somewhat different path than the rest of the debris.

“The winds turn clockwise as you go up in a severe weather situation, with southerly winds at the surface and very strong westerly winds at the tops of thunderstorms,” Knox explained. “Based on our analysis of the tornado debris data, we hypothesize that the longest-traveled objects went up the highest, where they encountered winds that blew the debris downwind and slightly to the right of the tornadoes’ paths.

“This could be of importance in the future if tornadoes loft toxic or radioactive debris. In such cases, it’ll be critically important for public safety to know where the debris will go, and our study is the most comprehensive work to date documenting where debris traveled during a real-life tornado outbreak.”

The tornadoes touched close to home for Knox, who emphasized the social and ethical aspects of research during the project.

“This tornado outbreak was centered on my hometown of Birmingham, Ala.,” he said. “I repeatedly reminded the students of our obligation to respect the privacy of the owners of the debris objects and to honor the memories of those who died in the tornadoes.”