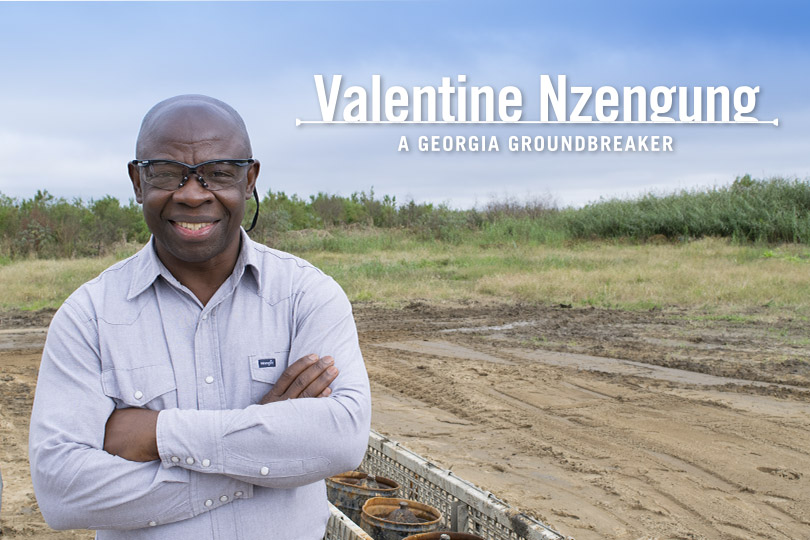 His inventions to neutralize explosives protect humans and the environment

Valentine Nzengung has spent the vast majority of his professional career working with materials that most people avoid—explosives.

He has spent countless hours in his laboratory studying the properties of some of humanity’s most dangerous creations, from relatively simple compounds like gunpowder to advanced chemical warfare agents. But Nzengung isn’t interested in creating these materials; he wants to destroy them.

And that’s no simple task. It is easier and far cheaper to create explosives than it is to dispose of them. The relative ease with which they are manufactured has led to stockpiles of munitions and other explosives—often the unfortunate legacy of prolonged armed conflict—that many governments and private industries would like to be rid of, and Nzengung is ready to help.

“For many years, the simplest and most common solution was to intentionally detonate or burn explosives in open fields, but that process leaves behind a variety of dangerous byproducts that can pollute the air and soil or leech into lakes, rivers and aquifers,” said Nzengung, professor of environmental geochemistry at the University of Georgia. “Explosives and some of their byproducts have been linked to a variety of human illnesses, including cancer and damage to the central nervous system.”

It took many years of study, but Nzengung eventually discovered a way to destroy these dangerous materials safely and sustainably, and he called his creation MuniRem.

Short for “munitions remediation,” MuniRem is a white chemical mixture that, in its bulk form, looks a bit like flour. To use it, all technicians have to do is combine MuniRem with water and introduce it directly to explosive materials. This begins a very fast chemical reaction that neutralizes the explosives in minutes.

More importantly to Nzengung, the byproducts of the complete chemical reaction are all nonhazardous. So not only are the explosives easy to dispose of, but MuniRem can also be used to decontaminate soil and water in places like bomb ranges, mines or munitions factories where dangerous residues have accumulated over many years.

“MuniRem is also particularly attractive because it is between 30 to 50 percent cheaper than other competing technologies,” Nzengung said. 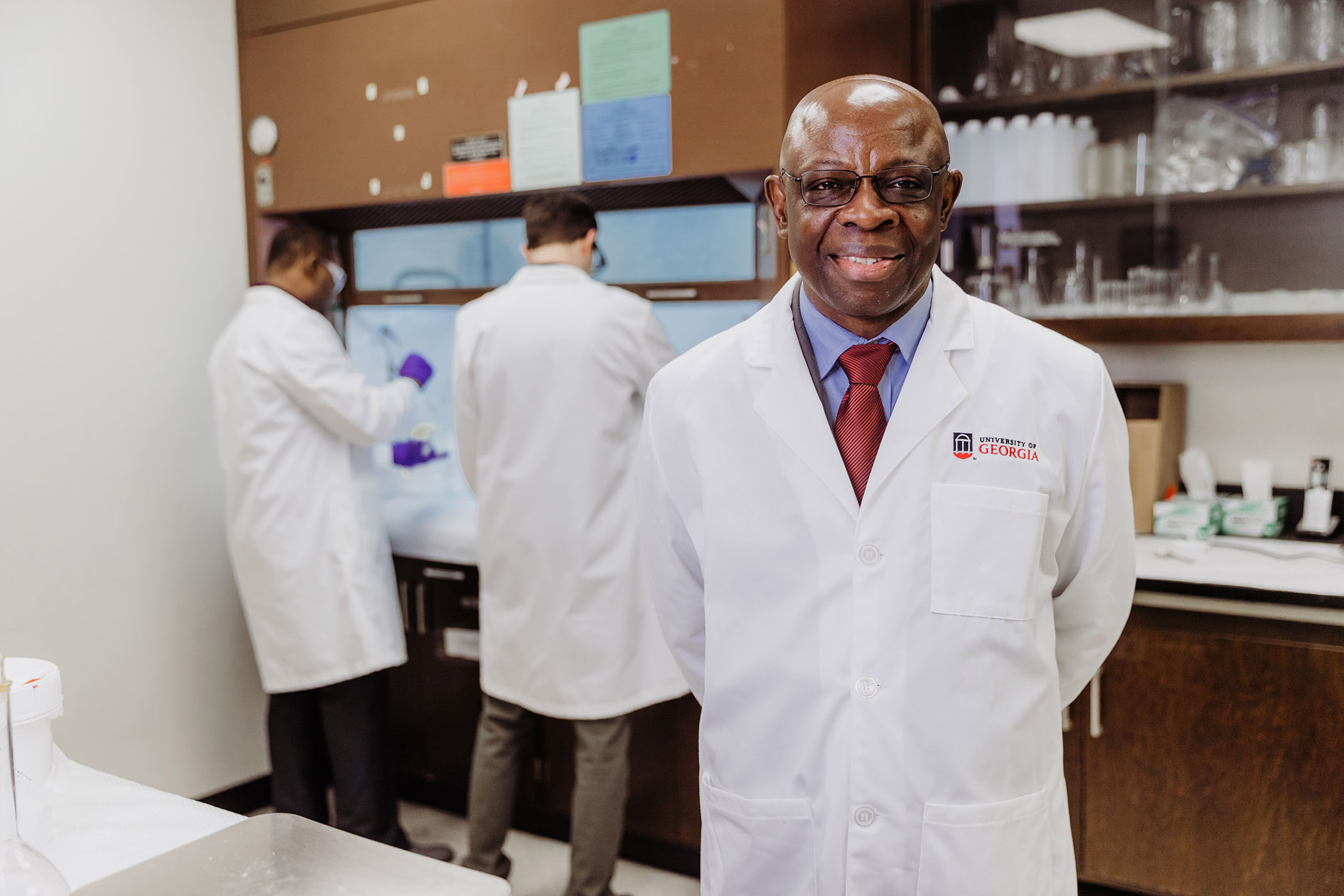 And he has found no shortage of groups interested in his invention. Through his company, MuniRem Environmental, Nzengung and his team have worked on projects with the U.S. Department of Defense, commercial explosives manufacturers, and governments around the world.

“When I talk with people about explosives, most of them immediately think of military ordnance like bombs or missiles, but explosives are far more common than you might think,” Nzengung said. “Mining and construction companies, for example, use explosives to move earth. There are large numbers of confiscated fireworks in warehouses that could be dangerous. Even the airbag in your car relies on a small explosive charge to inflate the bags quickly. So, there are a tremendous number of applications for this technology.”

Explosives aren’t all bad, Nzengung said. They are a normal part of everyday life. But when we need to get rid of them, it’s imperative that we do so as safely as possible.

From dry cleaning to dynamite

While Nzengung has found success with his invention, he didn’t begin his career working with explosives. One of his first research projects focused on the cleanup of soil and groundwater contaminated by solvents used in the dry-cleaning industry, which can be toxic.

Shifting from dry-cleaning waste to explosives may seem like a dramatic jump, but Nzengung doesn’t see it that way.

“From my perspective, this is all about chemistry,” he said. “I look at the chemical bonds in these substances and try to figure out how I can break them down and turn them into something else.”

We’ve known for decades that abandoned toxic and explosive materials needed to be cleaned up, we just didn’t know how. Now we do.” — James W. Porter, Meigs Professor of Ecology Emeritus

Nzengung started in explosives remediation when he worked on a project for the U.S. Department of Defense to clean soil contaminated with perchlorate, an oxygen-adding compound used in the manufacture of solid rocket fuel.

“As a university researcher, it can be difficult to get your hands on explosives for scientific testing, but suddenly I was surrounded by it,” Nzengung said. “That project is what allowed me to develop the early predecessors of MuniRem.”

After many years, he was able to take the technology from a small side project to a successful business, and both his clients and the environment have benefited from his creation.

For example, MuniRem Environmental contracted with the U.S. Department of the Army to develop portable kits to neutralize small quantities of nitrocellulose- and nitroglycerin-based propellants and explosives that occasionally wash up on Hawaii’s beaches. The propellants are legacy munitions from World Wars I and II, the Korean War and the Vietnam War that were dumped at sea.

“We’ve known for decades that abandoned toxic and explosive materials needed to be cleaned up, we just didn’t know how. Now we do,” said James W. Porter, Meigs Professor of Ecology Emeritus at UGA, who has conducted extensive research into the environmental impacts of unexploded munitions on the island of Vieques, Puerto Rico.

“Unexploded ordnance is point-source pollution. Other methods of bomb disposal spread this toxic material out across the landscape, creating what is known as a migrating debris field,” he said. “MuniRem doesn’t do this. It neutralizes everything on site, reducing even the most toxic compounds to their harmless elemental composition.”

Nzengung’s company also helped decontaminate the equipment and buildings at the former Louisiana Army Ammunition Plant, which were used to demilitarize munitions made of an explosive compound called H-6, a mixture of TNT, RDX and powdered aluminium. In this project, the manufacturing equipment and even the building itself needed to be decontaminated so that the facility could be demolished.

“In munitions factories like this, small amounts of explosive material collect in the cracks and crevices of the machinery and even on the walls and floor of the facility,” Nzengung said. “We sprayed down the machines and the building with a MuniRem-and-water solution to neutralize these chemicals so that demolition could proceed safely.”

In a more unusual case, MuniRem personnel worked with the U.S. Army Corps of Engineers to neutralize nearly 200 Civil War-era artillery rounds recovered from the bottom of Georgia’s Savannah River, where a gunboat was scuttled more than 150 years ago. 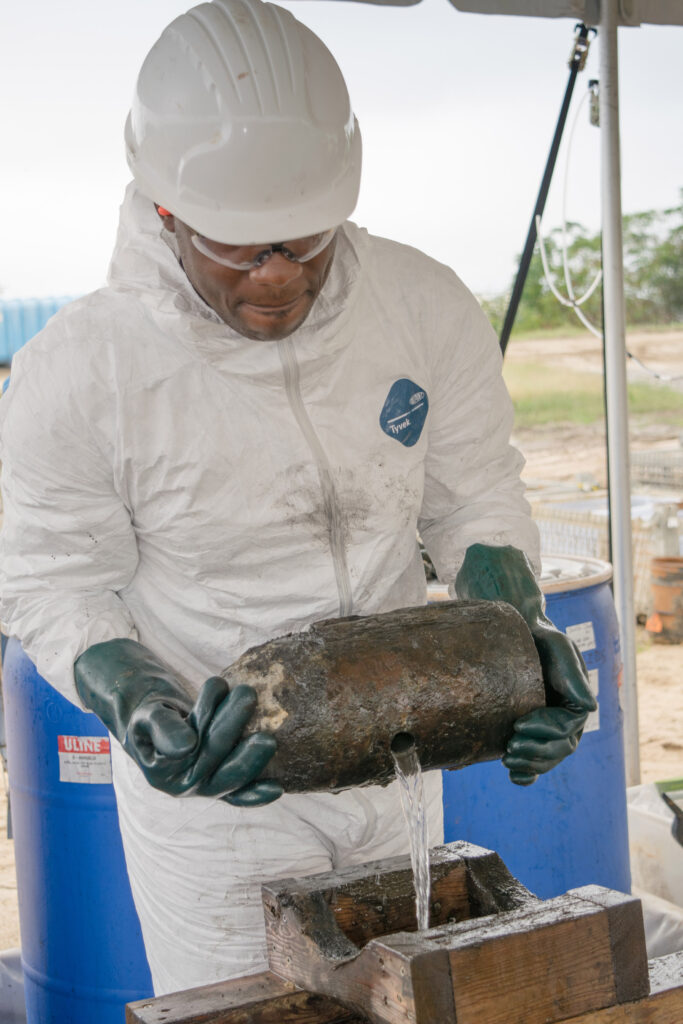 Project engineer Spencer Nzengung flushes the interior of Civil War artillery shells with a mixture of water and MuniRem. (Photo by Amy Ware)

Historic preservationists who wanted to display the shells in museums and at conservation societies needed a way to render the ordnance safe, so Nzengung and a team of engineers and technicians built a mobile munitions-neutralization facility to make each artillery projectile safe to handle.

MuniRem Environmental ordnance experts Ben Redmond and Matt Christiansen placed each munition in a metallic box filled with water and bored a hole to expose the black powder inside. They operated the drill from a safe location behind a steel blast screen, using an iPad and GoPro camera to observe the process from a distance. From there, they flushed the interior of each shell with a MuniRem solution pumped through a high-pressure nozzle.

“I was amazed by how well preserved these projectiles were; it was almost like they had been made yesterday,” said Redmond, a retired Marine Corps explosive ordnance disposal master technician and senior technical consultant for the project. “The powder in a lot of these shells was bone dry.”

From there, the shells moved down the line, where an engineer sprayed the interior of the munitions with a mixture of water and MuniRem using a small rubber hose. After flushing each shell several times, they were then moved to a tub to soak in a MuniRem bath for several hours. 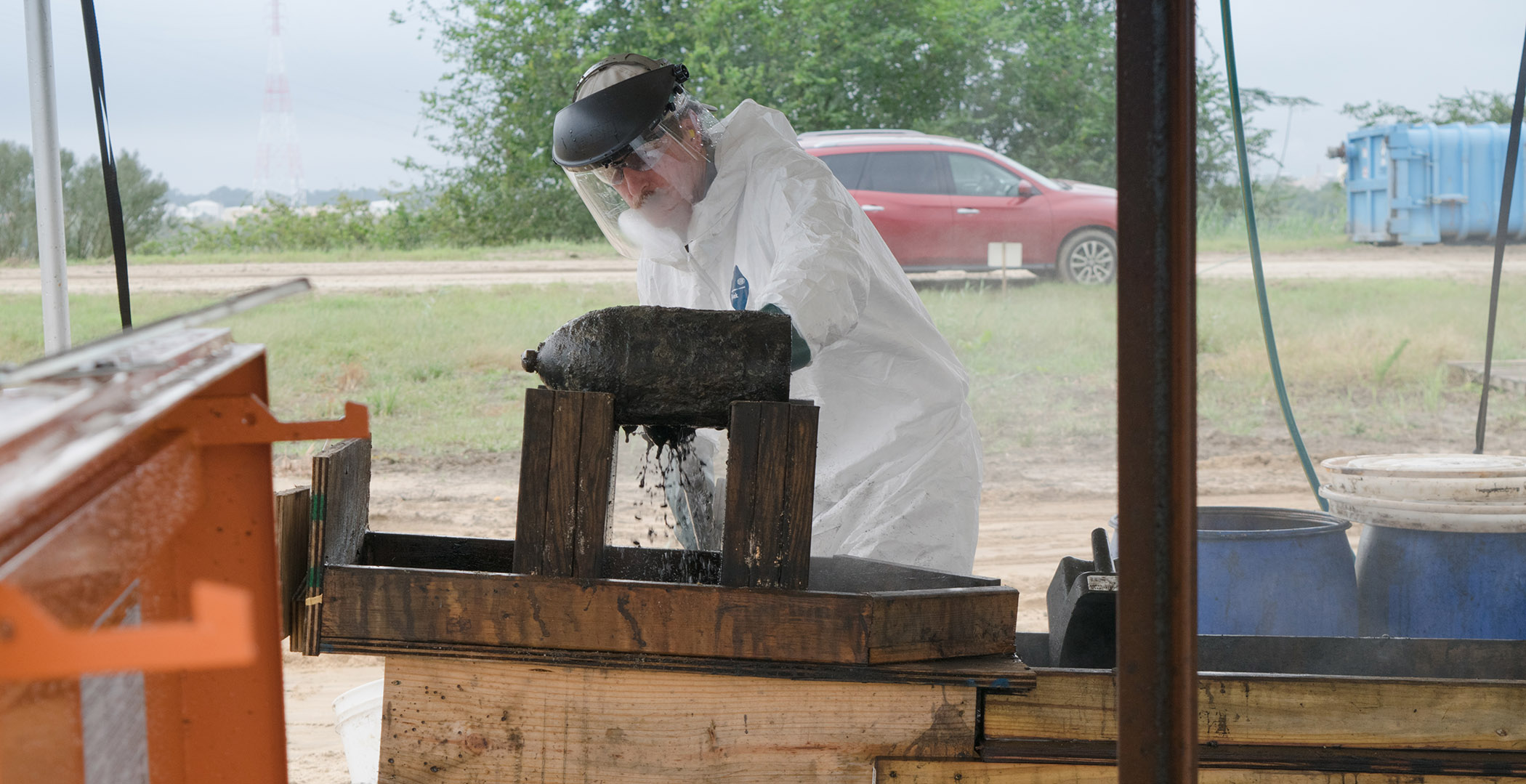 “The soak ensured that every last trace of explosive powder would come in contact with the MuniRem,” said Nzengung.

In another contract with the Army Corps, MuniRem was used to decontaminate soil at an operation support command site that was contaminated with TNT and RDX, both common explosives used during World War II.

After identifying the explosive residues, technicians tilled MuniRem into the contaminated soil and added water to initiate the chemical reaction.

“After 24 hours, we tested the soil again and found that we achieved our cleanup goal,” Nzengung said. “We have used MuniRem in many similar applications to clean contaminated soil, which would have otherwise been unsuitable for human habitation.”

Nzengung continues to refine MuniRem in his UGA laboratory to find new applications for the technology.

He is currently working on a kit for first responders, including police officers, fire fighters and bomb technicians, who might discover explosives in the course of their duties.

“Every city has a bomb squad, but we want to develop a product that many different first responders could use to neutralize explosives quickly and safely,” Nzengung said. “You can imagine a first responder walking into a garage or warehouse where someone is manufacturing illegal explosives. They could begin to make the area safe by mixing MuniRem with water and applying it to the explosives to mitigate the risk.”

Our technology works, and I know that it solves many serious humanitarian needs.” — Valentine Nzengung

His company is also working on a technology that they call the MORB, or Munitions and Ordnance Remediation Blanket. This device is specifically designed to destroy military-grade weapons, particularly those that eject shrapnel, such as improvised explosive devices, or IEDs, and underwater munitions in place.

Creating a new product and moving it into the marketplace is a difficult process, but Nzengung’s tenacity is unwavering.

“It has taken me years to convince potential clients that our product works, and they are starting to take notice,” he said.

And others have taken notice as well.

Nzengung was recently named a Fellow of the National Academy of Inventors, which recognizes academic inventors who have made a tangible impact on quality of life, economic development and the welfare of society.

“Our technology works, and I know that it solves many serious humanitarian needs,” Nzengung said. “We will continue to improve our product to make the world a better place.”