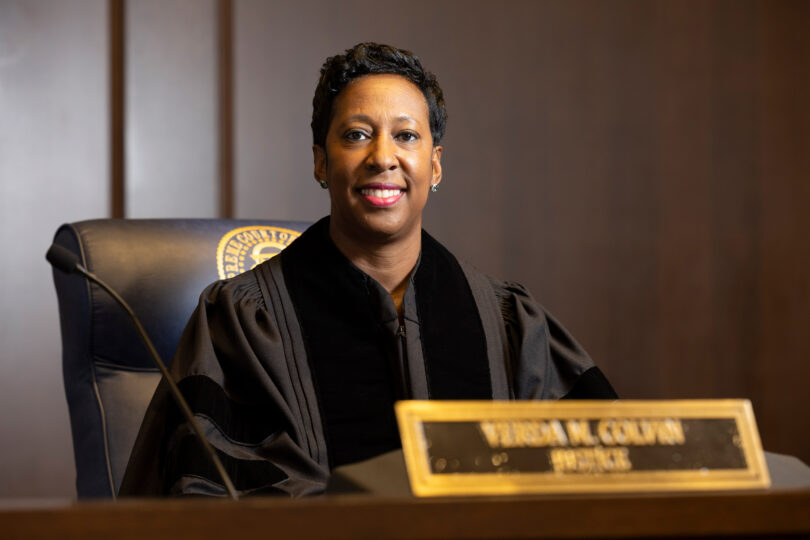 Verda Colvin JD '90, is using her position to advocate for and better the lives of at-risk youth in Georgia. (Photo by Peter Frey/UGA)

Becoming a justice on the Supreme Court of Georgia wasn’t part of the plan for Verda Colvin.

She was a defense attorney, a representative for the people.

“I thought I would never work for ‘The Man’ because I wanted to be on the side of ensuring rights were secured and justice was done,” says Colvin JD ’90. “But when I accepted the offer from my [UGA] mock trial coach, Ken Mauldin JD ’80, to work with him in the solicitor’s office, I found out that I could do so much more as a prosecutor than I ever could as a defense attorney.

“I had the chance at the beginning of the process to ensure that things were fair, that people were treated with respect, and that while there were consequences for actions, people could move on with their lives.”

Prosecution was where she was meant to be, Colvin thought. She worked her way up from assistant solicitor in the Athens-Clarke County Solicitor’s Office to Assistant United States Attorney in the Middle District of Georgia. And that’s where she thought she’d stay until she retired.

“I had it all mapped out, but in walked Michael Moore,” Colvin recalls. Moore was the U.S. Attorney for the Middle District at the time, and he wanted to nominate her for Superior Court. She had previously been asked to consider the upcoming opening by her supervisor, Sharon Ratley.

Colvin thought about saying no. She was at the top of her game, toward the latter part of her career with one kid about to go to college and another in Catholic school. Superior judges are elected, and if she took this on, she’d leave the job security of her prosecution days behind.

“I thought about something that I told my Sunday School kids. I told them faith and fear can’t reside at the same place, at the same time, at the same level. You’ve always got to choose one,” she says.

About a year after taking the bench in 2015, Colvin was approached by Capt. Ellis Sinclair of the Bibb County Sherriff’s Office about a new program he was starting for at-risk youth. Consider the Consequences shows young people how their poor choices could lead to jail or even death.

Colvin signed on, ready to help young people she feared were “being discarded.”

“Adults have become so intertwined with their desires, their wants, and the secular things of the world that I don’t think a lot of times kids are getting all they need, primarily love—that no matter who you are, what you’ve done, I love you. So I would tell the kids that.

That commitment to young people and making a difference in the lives of others led Colvin down the path that culminated in Gov. Brian Kemp BSA ’86 appointing her to the Supreme Court of Georgia in July 2021.

I thought about something that I told my Sunday School kids. I told them faith and fear can’t reside at the same place, at the same time, at the same level. You’ve always got to choose one” — Verda Colvin JD ’90, associate justice, Supreme Court of Georgia

The significance of being a Black woman appointed to the state’s highest court is not lost on her.

“Having me on this court shows children who don’t look like the majority that they have value, that they matter, that what they say can count, and that they have the intellect and ability to serve at our highest level,” Colvin says. “That’s why I think my service is important. It is not about me. It’s about what it can do to inspire, to encourage, and to help us think more broadly.”