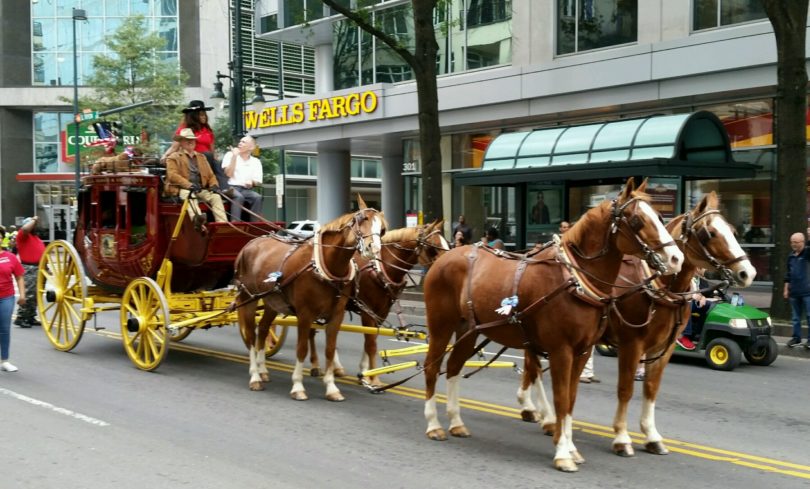 Three years ago, a horse owned by David Helmuth of Milledgeville, Georgia, was referred to the University of Georgia Veterinary Teaching Hospital for a broken bone in his front leg. Today, Rusty is preparing to lead the first–ever six-horse stagecoach team for Wells Fargo in the 2018 Rose Parade New Year’s Day in Pasadena, California.

Rusty is a 10-year-old Belgian who works as a member of the Wells Fargo Bank stagecoach team. In 2014 Rusty was kicked in the shin by another horse right before pulling the stage in the Savannah St. Patrick’s Day parade. It didn’t appear serious at the time, but the next morning his leg was very swollen, so Helmuth contacted his local veterinarian who referred them to the UGA Veterinary Teaching Hospital, part of the College of Veterinary Medicine.

[Eric Mueller interview from University of Georgia on Vimeo.]

Once in Athens, the veterinary team determined that extensive medical care and surgery would be required to treat the injury, but the prognosis wasn’t great. Helmuth was told that it was possible that Rusty may never be sound again.

“In Rusty’s case, he was very lame, almost non-weight-bearing lame where he couldn’t put weight on that leg,” said Eric Mueller, chief medical officer of the veterinary teaching hospital at UGA and part of the team that treated Rusty. “Initially we probably would have given him about a 50-50 chance because of the size of the horse, the location of the wound and the severity of the lameness.”

Despite the risks, Helmuth decided to go ahead with the surgery. Rusty came through with flying colors thanks to the dedicated team at the teaching hospital and now, three years later, Rusty can boast a 100 percent recovery. He hasn’t been lame a day since the surgery.

“It’s nothing short of a miracle,” said Helmuth. “I can’t say enough about the UGA veterinary hospital, the students, the vets. They were just wonderful. I believed in them and they believed in me, and we all believed in Rusty.” 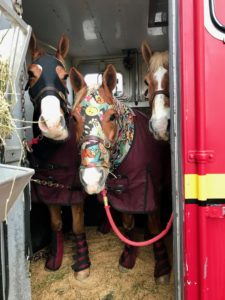 Rusty in his trailer.

Rusty is one of six horses Helmuth is taking cross country. All six will be hitched up to the Wells Fargo stagecoach. The horses appearing in the parade are half Belgians and half quarter horses—what they call a crossbreed.

And Mueller and his medical team will be watching Rusty on television as he leads the coach down the parade route.

“That’s why we do what we do,” said Mueller. “We’ll be super proud of Rusty and all he’s accomplished, and we’ll be thinking ‘go Dogs,’ because we really want to get to that national championship, and Rusty’s going to help us get there.”

The 129th Rose Parade will air on New Year’s Day beginning at 8 a.m. Pacific Time on ABC, NBC and other networks before the University of Georgia plays the University of Oklahoma in the Rose Bowl with kickoff shortly after 5 p.m. Eastern Time on ESPN.