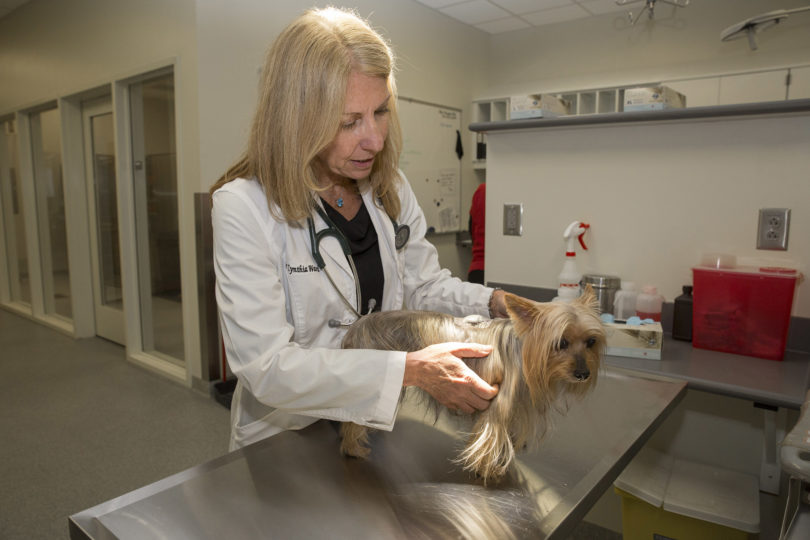 Since moving into its new facility

“It has been an exciting and busy two years,” said Dr. Gary Baxter, associate dean for clinical services. “Our new facility has had a positive impact on not only our students but also on the animals that we care for at our hospital and their owners and on the veterinarians and staff who work there.”

Located at 2200 College Station Road, the center opened March 25, 2015, and includes the college’s Veterinary Teaching Hospital and a Veterinary Education Center. Before moving, the college’s hospital was handling more than 24,500 animal visits per year in one of the smallest veterinary teaching hospitals in the U.S.

“Since day one, the new facility has been a vast improvement with nearly three times the space and an impressive list of state-of-the-art medical equipment,” Baxter said. “But what I am especially proud of is what we have accomplished since moving in. Anyone can occupy a building, but I feel like our faculty, staff and students have really made the most of this amazing opportunity that we were given by the state of Georgia and by our generous donors.”

Highlights for the Veterinary Medical Center from the past two years include:
• Handled more than 52,000 animal visits;
• Provided clinical training to more than 300 residents, interns and students;
• Launched or expanded several new services including a small animal rehabilitation service, an equine podiatry service, equine CT, an intermediate care ward, a dairy milk-quality lab, a diabetes clinic and an interventional radiology service;
• Began using stereotactic radiation therapy for the treatment of tumors in cats and dogs, becoming one of only a handful of hospitals across the nation offering this advanced oncological treatment option;
• Utilized the hospital’s new Food Animal Treatment Area to better serve Georgia cattle owners and have seen a 25 percent increase in the number of cattle visits to the hospital; and
• Hosted seven continuing education events for veterinary professionals.

The $97 million project included $65 million in state funds, $30 million in private donations and $2 million from other sources. Another milestone for the facility was the renaming of its small animal hospital last fall in honor of Cora Nunnally Miller, a donor who gave more than $13 million to the College of Veterinary Medicine. Of her gifts, more than $7 million was designated for building the new hospital.

“We are incredibly thankful to UGA, Georgia taxpayers and our donors for supporting us in the building of the VMC,” Baxter said. “I am confident that this facility will enable future generations to continue to advance the field of veterinary medicine both regionally and nationally.”