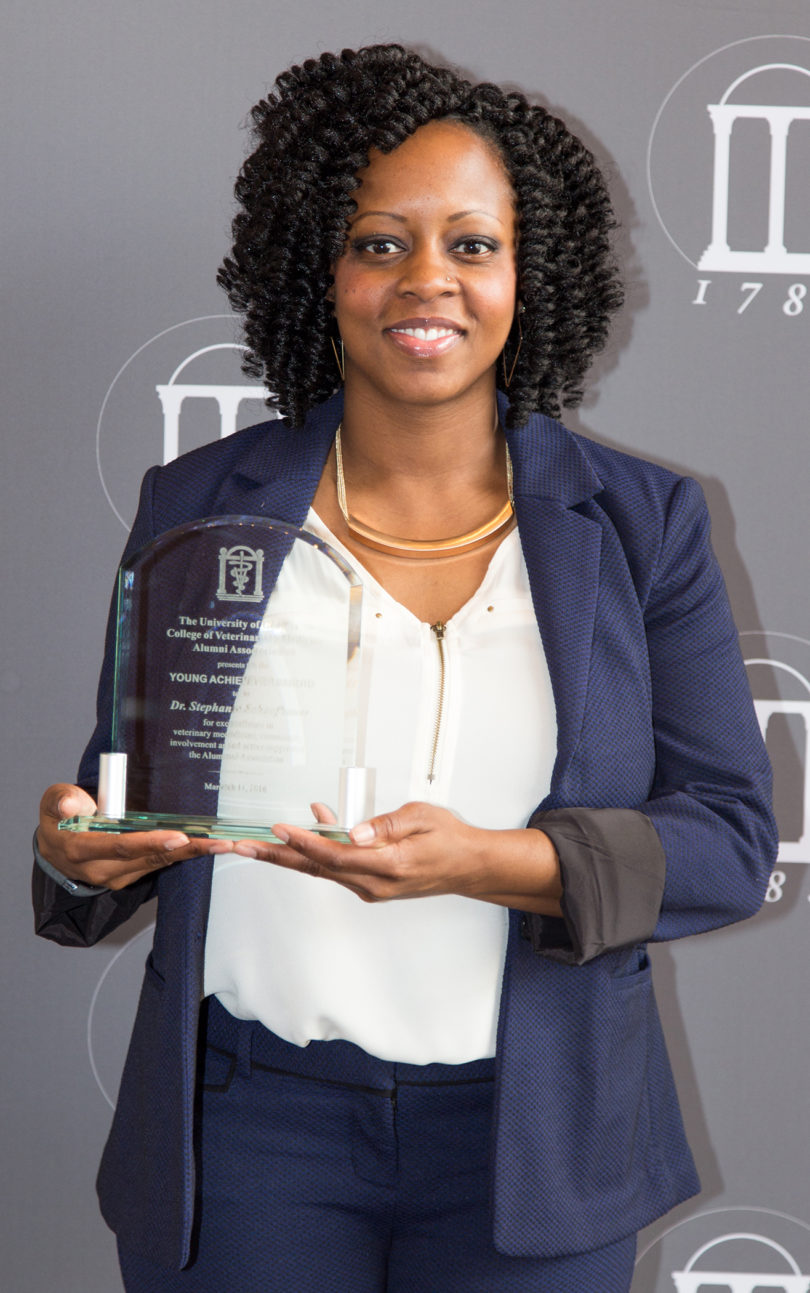 Athens, Ga. – The University of Georgia College of Veterinary Medicine recognized four alumni with awards for service to the college and the veterinary profession during its 53rd Annual Veterinary Conference and Alumni Weekend.

Annually, the Alumni Association of the College of Veterinary Medicine recognizes alumni contributions to animal and human health-related public service; involvement in the local community, state or nation; veterinary educational research and/or service to veterinary associations at various levels; contributions to the college’s alumni association; and professional service.

Stephan Schaefbauer graduated in 2006 from UGA and headed to the University of Minnesota to pursue a master’s degree in public health and a residency at the Center for Animal Health and Food Safety. Near the end of her program, she landed her first job with U.S. Department of Agriculture’s Animal and Plant Health Inspection Service as a veterinary medical officer based in St. Paul.

In 2008, she moved to the APHIS office in Raleigh, North Carolina, where she served for two years as an import risk analyst and four years as an epidemiology officer. During her last two years in the region, Schaefbauer also worked as an adjunct assistant professor at the North Carolina State University College of Veterinary Medicine.

She left Raleigh in 2014 to join the APHIS office in Des Moines, Iowa, where she continues to serve as an epidemiology officer in Iowa and Wisconsin.

Schaefbauer currently serves on the American Veterinary Medical Association’s Council on Public Health and Regulatory Veterinary Medicine. Past leadership positions include president of the American Association of Food Safety Veterinarians and vice president of education for the Centennial Toastmasters. She also serves on the AVMA Diversity Taskforce and the AVMA 20/20 Commission.

Stinson has helped educate farmers as well as local students on managing cattle, treating livestock for parasites, keeping them free from disease and providing them with good nutrition. He also served in the U.S. Army; in his community as a board member for the Yadkin Valley Bank and as a nine-year member of the Wilkes Board of Health; in his profession as a member of the North Carolina Veterinary Medicine Executive Committee; and his church, Wilkesboro Baptist Church, as a member and a deacon, earning him the status of Deacon Emeritus.

In 2015, Stinson was inducted into the Wilkes County Agricultural Hall of Fame.

Nolan is an award-winning researcher in the area of E. coli-caused diseases of animals and people. She has given numerous invited presentations, authored refereed journal articles and book chapters and garnered millions of dollars in research funds. As a teacher and academic adviser, she was named Distinguished Educator of the Year in 2001 by North Dakota State University’s Blue Key National Honor Society. She received numerous accolades during her time on faculty at NDSU and, in 1999, founded the university’s Great Plains Institute of Food Safety.

Nolan is a member of the American Veterinary Medical Association, American Association of Avian Pathologists, American Society for Microbiology and International Society of Plasmid Biology. She serves on the editorial review board of Avian Diseases and as associate editor of Diseases of Poultry.

Rebecca E. Stinson graduated from UGA in 2002, and her service to her profession has remained a constant in her life since she served with the Student American Veterinary Medical Association, first as secretary, then, during her clinical year, as president-representing nearly 10,000 student members worldwide.

Her current post as AVMA vice president caps nearly two decades of volunteer work within the national organization. The core of her professional world is as an equine practitioner in North Carolina, where she is a founding member of the Carolina Equine Hospital, located in Browns Summit and established in 2009.

For six years, she served on the board of directors for Horsepower Therapeutic Learning Center. She represented the veterinary community as a member of the Rockingham County Board of Health and Human Services, served the American Association of Equine Practitioners as a member of its Student Relations Committee, and, since 2005, has served the North Carolina Veterinary Medical Association as its large animal committee chair.

Since 2009, Stinson has taught at Averett University, in Virginia, as an adjunct professor of equine anatomy and physiology. She has served as a member of the UGA Veterinary Alumni Association board since 2013.

UGA College of Veterinary Medicine
The UGA College of Veterinary Medicine, founded in 1946, is dedicated to training future veterinarians, conducting research related to animal and human diseases and providing veterinary services for animals and their owners. Research efforts are aimed at enhancing the quality of life for animals and people, improving the productivity of poultry and livestock and preserving a healthy interface between wildlife and people in the environment they share. The college enrolls 114 students each fall out of more than 1,100 who apply. For more information, see www.vet.uga.edu.