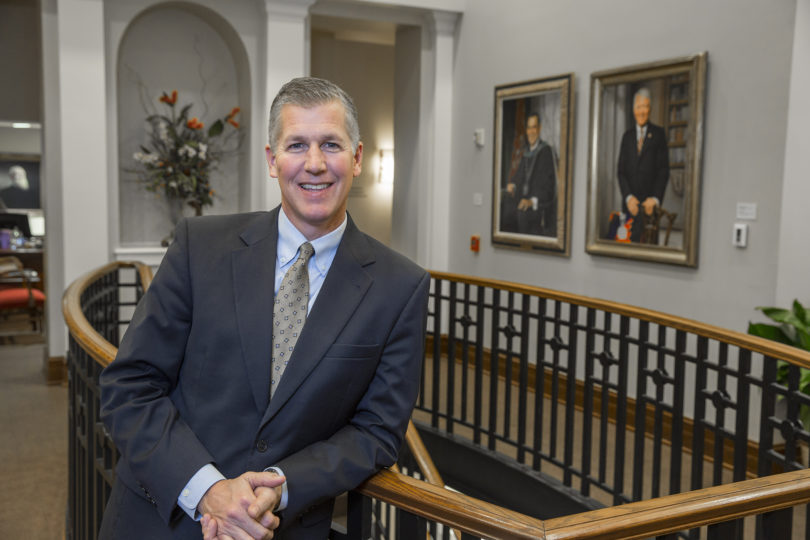 Kelly Kerner, UGA’s vice president for development and alumni relations, described having something like an “out-of-body” experience on his first day driving to work down Lumpkin Street in July.

“Five months before, I knew almost nothing about this university, and now I’m driving to work in this beautiful place at one of the great universities in the world,” Kerner said. “The gravity of the situation and what it meant to me personally and professionally was heady.”

The inspiration from that first trip to his office in the administration building hasn’t really left. It’s a good thing too, because that kind of enthusiasm is essential in his position.

Kerner is the man in charge of leading UGA’s comprehensive campaign—to raise no less than $1 billion—and creating a new culture of giving for the university.

UGA President Jere W. Morehead stressed the importance of this goal Jan. 21 at the State of the University address.

“The long-term success of the university also will be determined by our ability to increase private support,” Morehead said.

The effort to achieve the lofty fundraising goal, Kerner said, must start with a belief in the university’s mission of teaching, research and service.

“What we’re doing is really getting the opportunity to change lives,” he said.

Kerner came to UGA from Bowdoin College, a small liberal arts college in Brunswick, Maine, with a 2013 endowment of more than $1 billion.

Aside from the differences in annual snowfall, the transition from New England to the South and from a liberal arts college to a public land-grant institution wasn’t as jarring as one might think.

Kerner said he probably is conditioned to be adaptable. As a child, his family moved from one place to another for his father’s job.

“Because of the sort of vagabond lifestyle we were living, I never really felt like any place was home,” he said. “We try to make home wherever we are.”

Kerner also acknowledged the support he’s received from his family.

“My wife, daughter and son have been unbelievable in this transition,” he said.

When it comes to the transition in jobs, Kerner said he already feels at home.

“I actually feel like the day-to-day work is very similar (to Bowdoin College),” Kerner said. “Now, it’s just on a much bigger and more complicated scale.”

Kerner credits the smooth transition to a strong foundation established before he arrived at the Division of Development and Alumni Relations.

One of the advantages of bringing an outsider such as Kerner to UGA is that he brings fresh ideas to the university. Those ideas are especially valuable when they come from someone with a proven track-record of working with successful fundraising organizations.

Kerner sees his newcomer status as a counterweight to the rich institutional knowledge of other top administrators, including the president.

“I think any time you have a leadership team, balance is important,” Kerner said.

It goes both ways. While Kerner is pushing new ideas at UGA, he said he often goes to administrators steeped in UGA tradition when institutional knowledge is needed.

“It shows great progress from where we came,” he said. “But when you look at all of the opportunities we have at the university to grow our revenue, that number could be a lot bigger.”

To increase these opportunities, Kerner initiated a reorganization of the development staff. The framework of the reorganization sought to clarify roles and build teams around the goal of greater effectiveness.

Kerner said he has focused on rebuilding and reorganizing a top-line structure in the division, which included the hiring of Jay Stroman as senior associate vice president for development and alumni relations. Kerner also promoted Meredith Gurley Johnson to executive director of the UGA Alumni Association.

Establishing the connections needed to raise the level of giving begins with the division’s ability to reach out to students and graduates of the university.

“If we do a good job engaging our alumni, they’re more likely to be open to the idea of giving,” Kerner said. “I see alumni relations as the connective tissue for the group.”

“Now that I’ve been here for six months, it’s blatantly clear,” Kerner said. “We have great opportunity for growth. If we can just execute on a few basic principles, we can see that growth become part of the nature of how we work.”

However, it will take some patience as the university prepares to reach its potential. While Kerner expects the university to raise more money this year than it did last, he estimated that it might take a few years before UGA gets the kind of fundraising traction it wants.

Until then, Kerner’s strategy has been to move the pieces into place and to try to get the university’s faculty, staff and alumni motivated to reach the goals.

“We have to believe that we’re one of the great universities in the world because we are,” he said. “Our aspirations are only limited by the hours in our day. Each individual’s effort is essential to the greatness of the institution.”