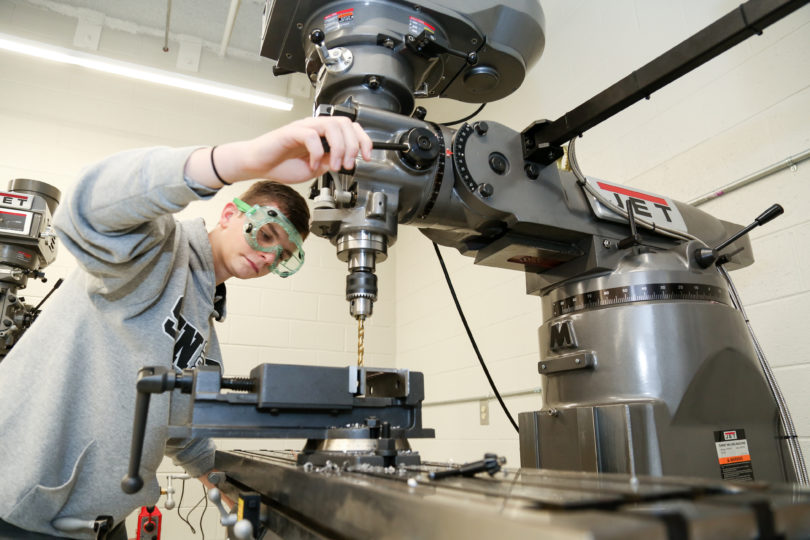 UGA’s Carl Vinson Institute of Government is helping many communities plan their academies, bringing local employers to the table with school officials and local technical colleges to identify workforce needs and programs that can prepare students to meet those needs. Tim Olson works on machine lathes and drills, skills that are giving him job prospects before he graduates.

Tim Olson is months away from high school graduation and already has job prospects in his local community.

That’s a win for the 17-year-old Hart College and Career Academy student, as well as for companies that have chosen to move into rural northeast Georgia. UGA’s Carl Vinson Institute of Government is helping many communities plan their academies, bringing local employers to the table with school officials  and local technical colleges to identify workforce needs and programs that can prepare students to meet those needs.

During his senior year, Olson learned how to operate industrial lathes and mills in a course taught by Athens Technical College instructors. Since the HCCA opened last fall, students also have had the opportunity to learn other technical skills including television production, nursing, cosmetology and 3-D print design.

Students are able to learn these skills while at school finishing their academic high school curriculum.

“I get a head start, and I don’t have to pay for it,” Olson said. “The number of companies looking for workers is crazy. They’re going to pull from these programs.”

Census data indicate that 21.4 percent of Hart County residents do not have a high school diploma. Only 15.7 percent have completed a four-year degree or higher. The majority of the jobs currently available require less than a two-year degree. About half of Hart County’s residents commute to another county for work.

Preparing students for careers that will keep them in their local communities is the goal of the college and career academies, 40 of which have been created throughout Georgia since 2008.

“We want to quit exporting young people to more urban areas by providing great career opportunities right here,” said Dwayne Dye, the Hart County Industrial Building Authority’s director of economic development. “These opportunities are with multinational companies. The career academy is key to getting the young people turned out who can go to work for these companies and stay right here.”

Greg Wilson, a faculty member with the Institute of Government, helped Hart County and others after participating in Gov. Nathan Deal’s High Demand Career Initiative, which began in 2014. Wilson recently helped the city of Marietta secure a $3.1 million grant to start a college and career academy. Haralson County also has hired the Institute of Government to provide technical assistance as it seeks a $3.1 million grant to launch a college and career academy there.

“It’s really gone from one project (High Demand Career Initiative) to a whole line of work,” Wilson said. “A lot of communities are realizing that workforce is critical. We recognized there was a need there and we could help.”

With the institute’s help, Hart County held a number of listening sessions in the  community to draft a vision for the new academy. Local manufacturers like Fabritex, a Hartwell-based tube, sheet metal and plate fabrication company, participated in those sessions. Fabritex President Lee Adams, who is on the HCCA board, said those sessions highlighted many of the needs of local employers. Those ranged from a lack of qualified welders to a need for employees with better developed soft skills.

The information helped determine what skills to teach at the academy, Adams said.

“If you’re trying to drive a ship and don’t know which direction to go, you’re just going to go in circles,” Adams said. “UGA helped us ask the right questions. The feedback we got from the listening sessions was amazing.”

Phillip Brown, CEO of Hart College and Career Academy and a veteran high school administrator, says the assistance from UGA is invaluable to a smaller county like Hart, which has 26,000 residents.

“In a small town, you may not have the skillset to facilitate something like that,” Brown said. “Working with UGA and having experts at your disposal makes a big difference.” 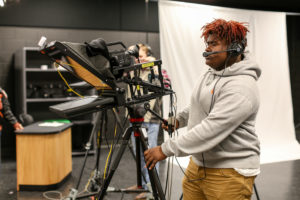 Currently, about 40 Hart County High School students are enrolled in work-based learning, a program where high school students work for companies like Fabritex while they’re still in school. Soon, the HCCA will host training programs for adults in another effort to bolster the workforce.

Currently, about 40 Hart County High School students are enrolled in work-based learning, a program where high school students work for companies like Fabritex while they’re still in school. Soon, the HCCA will host training programs for adults in another effort to bolster the workforce.

“I preach that the schools are a tool for economic development,” said Hart County High School Principal Kevin Gaines. “Our goal is to graduate students to move on, but we want to step back and look at the the whole picture. We don’t want to be in a box. We want to look at our community and see how we can play a role in making it better.”

Enthusiastic students are evidence of that. In Greg Gaines’ TV production class, students broadcast about 150 events a year. Senior Kevin Garcia has only been taking Gaines’ classes for a year, but he’s already learned the skills to put together promotional videos for small businesses.

It’s a career he never realized was out there.

“I feel like I know how to get a marketing career started now,” Garcia said. “I wouldn’t know I could do something with film without these classes. You get to learn what’s possible.”

For more than 200 years, the University of Georgia, as the land- and sea-grant institution, has worked throughout the state to create communities with educated citizens, strong civic and business leaders, good infrastructure, a skilled workforce, and amenities that help provide a positive quality of life, all key to attracting new companies and jobs. The University of Georgia continues to be uniquely positioned to boost the economic vitality of the state and increase prosperity for all Georgians.

This is part of a series of stories about UGA and economic development in rural Georgia.